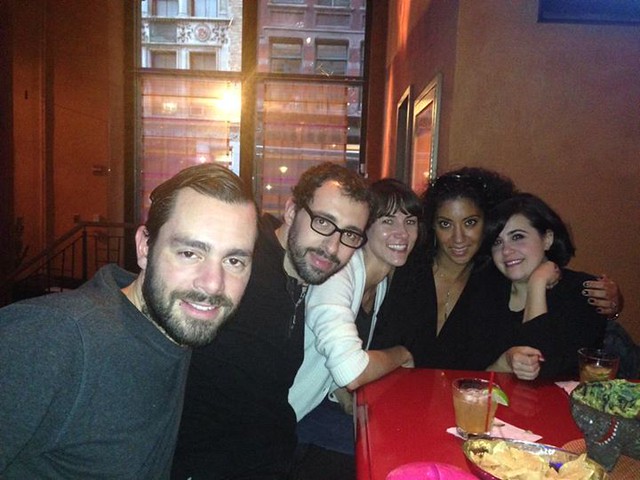 Ah, I've already let too much of my week slip away, I've lost it, just whoosh, right through my fingers. Oh, Saturday, let me start there, & maybe I can piece my way forward, retrace my steps, reconstruct the scene of the crime. Saturday we babysat for Olivia, of course, & I think I was maybe productive, like, did I write or something? Maybe. I'm due another Tor.com catch-up post. We decided to have dinner with Kira & Nino on Saturday instead of Sunday, for kicks, & ended up cutting loose a little more than we already do, since we didn't have to be at work the next day. We played Dixit, a French story game that I'd only played once before-- I think, maybe I am lying & I've played it twice before-- & hilariously enough, Nino was the best at it. You wouldn't naturally think "French story game? Right up Nino's alley!" but here we are. Then Sunday! I hustled all morning, getting some more work done, going to the gym, that sort of thing, & then my brunch plans up & got cancelled! Carla was in town, & so I shouldn't be surprised that scheduling was...fluid. Anyhow, Jennifer went out with her for dinner, while I stayed home. I did go out after work on Monday to meet up with her & Cindy & the crew; there were some of her other friend & Jason & Kevin rolled in as I was leaving. Jenny stayed out all night with them, but I'm an old fuddy-duddy, I bowed out early. Then fast-forward past Tuesday-- nothing happened, I don't think?-- to Wednesday, & Television Night. Beauty & the Geek makeovers! With

fatbutts & James. Gilbert loved only ovals-- beard & curly ginger hair one oval, badly fitting clothes another-- but when they shaved him & dressed him it turned out he was pretty much a beach jock underneath? Fun. Last night, Thursday, I hung out with another regular crew, the Matt, the Brian, the Jocelyn, the Dave, the Kat. I got Jenny an engraved Guinness glass with her motto-- Top It Off!-- & left just as the baseball game was starting. So that...is what I've been up to. Oh I hooked up some friends of mine on a date & I think it went off well; I like playing meddling matchmaker! Oh,

onatopofthings was here! I don't know if I mentioned, so that was fun, too.