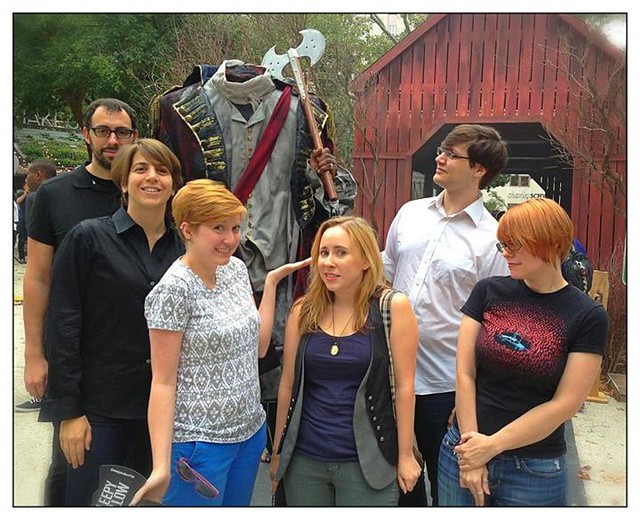 Let's see. So Jennifer is officially out of town. She's actually still in town, she's at work, but she's not coming home after work, so it counts. No big deal; I've got Television Night tonight & then Oubliette tomorrow. I'll keep it real. So what have I been up to? Went to the gym with Chris last night. Like I said, I've been lazy all year, & I recently hurt my arm, so I've been feeling a little sour in my skin. Monday I wanted to go, step up my game, but there was a reception for the Science Fiction & Fantasy Writers of America that I was supposed to go to, so go to it I did, even mingling despite myself. That's me with the Tor.com crew, up there. Before-hand I'd hung out with Kat & Dave; After-hand I rode the train home with Bridget. Oh, my lunches have been going hardcore, too. Marie is back from France, I saw Allison's new ink, & then hung out with Liz on Monday. Crap, I was going to mention something but I lost it when I got up to get coffee. Doesn't matter, what else? Sunday I stayed inside, we babysat Olivia & I wrote Tor.com stuff. Saturday, um, oh yeah! Saturday was Jocelyn's birthday! We went out to Astoria & got Greek food, obviously, then went back to her & Brian's apartment with everybody. Then, took a cab home! Since Chris & Autumn live across the street now, we could split it with no stop-offs. So that sort of stuff, that is what the snapshot of my life right now looks like. Oh I should point out that in like, the "feelings" zone, it was a really nice weekend with Jennifer, we totally made out on the couch all sweetly, I dug it. Being married to her is cool. I'm feeling a little bit over-extended socially; having Terra in China is a bummer, since our friendship deal is that we can hangout & be lazy. Hanging out & doing something is pretty exhausting. I've been doing too many somethings, & it isn't going to end this week; I'm already jam packed. I mean, let's be real, I spend my nights mostly at home on the couch watching the new fall season of shows, so this is mostly misanthropy talking. Speaking of shows: Sleepy Hollow is pretty stupid but occasionally actually spooky; The Blacklist needs to decide if it wants to be a fun mastermind/heist show like Leverage or if it wants to be a "serious" crime drama with torture & stuff in it. Brooklyn Nine-Nine is...fine, I like it okay but what is it? Agents of S.H.I.E.L.D. isn't blowing my mind, except insofar as there is a S.H.I.E.L.D. show that exists, but I dig it. Oh, you know what has been firing on all cylinders, the hero of the season? New Girl. Also, as usual, Parks & Recreation. Anyhow, so when I come home from hanging out with people-- I always leave first-- & Jenny comes home from her late night of work, that's what we do, we open a bottle of champagne & flip on the tube. Oh, & I've been watching Attack on Titan but that might be a whole post in & of itself. Oh, & Bravest Warriors, I finally found a compilation of it.
Collapse