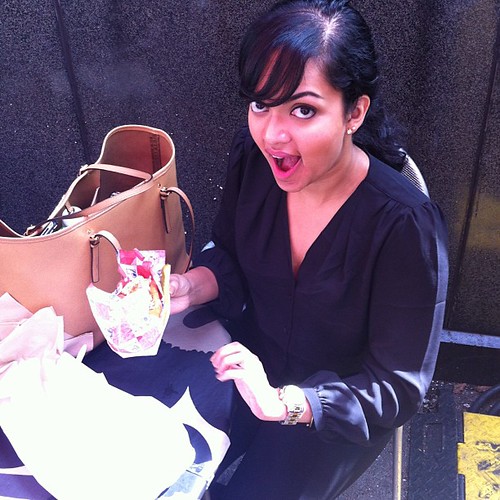 Last night I played trivia & was a big winner! In that my team won second place & I won a raffle. It was a Gothamist even, & so the Trollathon crew showed up in (minor) force. Now I am a bit of a blah today, but so it goes! Let's talk about what I won! First off, the raffle was for a couple of cronuts, the legitimate Dominique Ansel kind! Which are obviously ridiculous & not worth waiting in line for, but hey, free fancy pastries that people apparently are willing to wait in line for! I shared 'em with the team but got a few big mouthfuls. Then our team won second place at trivia, out of like seventy teams. Good for us! I didn't know how useful I'd be-- with trivia I either dominate it & know everything, or I look blankly at an empty piece of paper where I'm supposed to be writing an answer-- but I totally contributed. That magazine on Just Shoot Me was called Blush, the East River froze & "Finding Foster" is pretty close to Finding Forrester, maybe they gave us half credit! So second place nabbed us loot galore; I came home with tickets to some Janis Joplin musical, tickets to see Who Wants to be a Millionaire?, a free week of Citibike, some Doctor Who DVDs & a Doctor Who beach blanket, beer coozies, & probably some other random stuff. That was fun! Nice to see those folks. Then today Sherene & I got lunch at Madison Square Eats. Oh, & the other day I went there with Jim, & then the day before that I went there with Liz! What did I eat? I've eaten the new Tacotown stuff; barbecue tacos. I ate the old standby & probably one of the best choices possible, the lobster BLT from Red Hook Lobster Pound. & then today I went to Slide & got their slider made from chorizo & beef. All pretty great! Then I grabbed a triumvirate of macaroons & took them over to Jennifer, because she's been hard at work all week & deserves husbandly thoughtfulness.

I am the I am!
Behold! I am this lightning!
I am this madness!

So I guess I failed to blog about the first volume of this series, but as I said when I reviewed The Court of Owls, it was a no-brainer that I'd read Grant Morrison's Action Comics run. As I've said roughly one million times, All-Star Superman is probably the best Superman story of all of them, & listening to Grant Morrison discuss his opinions on the character (& other such characters) in Supergods would have been enough to convince me to follow along, even if I hadn't read All-Star. The thing is...halfway through this comic, the artist changes. Then two-thirds of the way through, different writers jump in...ah! This isn't a real graphic novel collection at all, this is "padded" with other stuff, stuff that just...isn't as good. Fisch & Landis aren't terrible, but the panel transitions are harder to follow & there is a distinct lack of "tell, don't show." Yes, we get it, Superman inspires people to be better people themselves, that is the theme, but you don't have to say that out loud. So yeah, this collective is very uneven, much like...well, much like DC has gotten a reputation for being. The big story arc involves Captain Comet, who shows up to spit some game about Neo sapiens & four lobed brains & "Oort-kind" & other such Invisibles-ish lines. I liked it, I like having a weird cuckoo-child arc, the changeling child is my jam, as it moral grey. It takes a lot to do ethical ambiguity in a Superman story, of all places, but Morrison pulls it off. Honestly? I think this might be plotted a little too "Silver Age." A lot is crammed in there, without space to breathe. I know it is passé to admit it these days, but the Bendis-style decompression can really help a story grow & achieve impact. That said, at least this is Captain Comet & not some new creation; the strength of serial storytelling is that you can bring in a stock character & assume people get the backstory, or at least the jist (or in this case, vibe) of it. Morrison has been creating a lot of new characters for his run-- Obama Superman is back-- but he knows when to use other methods, too. In the end? I wish this was volume two of a complete Morrison run, but on the other hand I will now have to buy volume three, & I plan on it, so I can't fault their business tactics. Other than to say this: I have an impression of the New 52 that is slapdash, uneven, "extreme" & padded with fluff. That means I assume I'd have to sift through to find good stuff, which sounds like a lot of work. The signal to noise ratio is why I don't care about floppies & why I don't buy more comics; I don't trust quality. Heck, even the flagship title, Superman, done by the blockbuster author, Grant Morrison, & the popular artist, Rags Morales...even that gets diluted. On the plus side, Superman can totally do surgery with his bare hands. 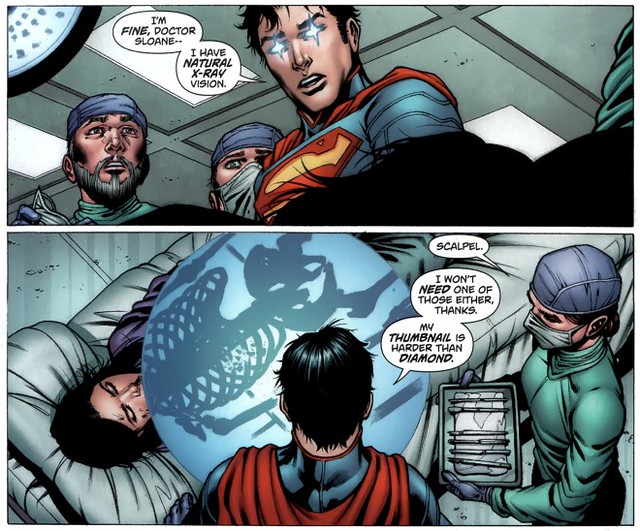