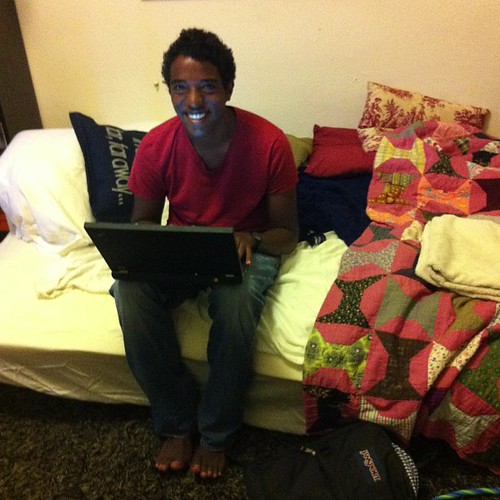 I usually describe Ahmed as "Jennifer's Terra," which isn't all wrong. Anyhow, he's been staying with us for the last few weeks, but I guess he's off to Brazil at the end of this one. He's a Canuck, so who knows what will happen from there. Only Uncle Sam, I guess. I have been bad at keeping up with life chronicles, but really I don't know if I've missed anything notable. It turns out paying me to blog is the best way to steal my attention, huh? Well, I can give a quick scattershot of random details. Corner pieces & an assorted jumble. Jenny woke up terrified in the middle of the night & I jerked awake too...wrenching my arm in the process. So I took the end of last week off the gym & have just been doing an hour of cardio when I've gone this week. I have been lax with my gym going this year, I don't like it but I can't quite pinpoint why; anyhow, lax isn't missing whole weeks, just not going as regularly-- more like two & a half times a week, at this point, rather than three & then some-- or pushing as hard. I've been getting lunch with Liz pretty frequently, as well as a host of the usual suspects. I'm behind on book reviews, but I haven't been reading as much, anyhow. Or well, I have, but I've been reading more for work, so less "stuff I can review" & more "fifty pages of something that needs more editing," you know? I watched Star Trek Into Darkness, the movie without a colon, & it wasn't good. Whitewashing Khan is one reason, "savage" alien natives is another, but ultimately the movie fails in the script, in needless confusion & complexity & in relentless parodies of the original Wrath of Khan. Fall television is back at least; New Girl was great, Neighbors was I don't care but I am glad it is back, & Sleepy Hollow was terrible, but maybe so terrible it is campy? But probably just terrible. I also have a project, banging some ideas into shape, & I think I've managed to assemble the bones; now I just have to articulate the skeleton. Along the way I've filled my notebook with doodles & marker, so my spellbook looks pretty awesome, though not as cool as

kingtycoon's Spellbook Project. I don't know; I've been busy at work, I've been busy socially, I've been busy mentally, but I haven't been putting my chicken scratches down. In part because if I'm writing, I should probably be writing other things. Maybe I'll rededicate myself to thinking of my Livejournal as a place to be sloppy, as a place to just unpack thoughts & anecdotes. I've been kind of killing it on my Tumblr, come to mention it, too.
Collapse