Born into Flesh World.
At peace in the Spirit World.
Struggle in Half World.

A thing that bugs me about books, heck, about the monomyth, is the Hero's Refusal of the Call. I mean, I don't mind a scene or a character with doubts, but there is a strand of fiction where the protagonist just drags their heels, dense as a brick, not wising up until the very last minute. Where the climax of the book is them deciding to be less passive of a character. Half World, for all of the lush tapestry of little details that we got, was one of those kinds of books. It just gets under my skin. I liked Goto's cosmology, I liked her myriad little flourishes, but I didn't like the main character. I want someone to get up & do something! The other extreme, competency porn, like the Queen's Thief is entirely my style, though, so I realize that personal opinion factors in. This is a very post-Gaiman book; in the style of Neverwhere, a regular person is thrust into the politics-- in this case, spiritual turmoil-- of a strange otherworld that is a distorted reflection of our own. You know the deal. Flesh World for life & death, Half World where you live out & resolve your traumas, & Spirit World, where you purify until you are totally holy...at which point you are born into Flesh World. That is how it is supposed to work, but now if you die in Flesh World, you die. Half World's torments are lived out forever, with no end. & Spirit? Who even knows, airy & strange. There are barriers up, have been for centuries, millennia. Can a girl born in Half World & raised in Flesh World do something about it? Written & illustrated in a style that reminds me of DiTerlizzi's WondLa series or Brom's illustrated novels, it is short book, a decent risk, but it takes two-thirds of the book for the character to have her "ah-ha!" moment, which is just too long for me.

He's the best robot.
Just ask the robotics club,
or the cheerleaders.

I read this a little while ago & struggled with what to say. I liked it better than Brain Camp, another Faith Erin Hicks collaborations-- which I enjoyed!-- & I think I liked it better than her solo joint, Friends With Boys. A story of student council, fighting robots, Mean Girls-style cheerleaders & a redemptive arc based on inclusion & moral relativism, sure, that is great stuff. I just don't have a lot to say about it. If you are looking for a pleasant read about high school or nerd culture, this is it. It is a low stakes story, but for the characters in it the stakes are personal, so it doesn't read like frivolity; it reads like life or death. I enjoyed it; if you like these kinds of graphic novels in general, then you'd like it too. I'm pretty confident of that. 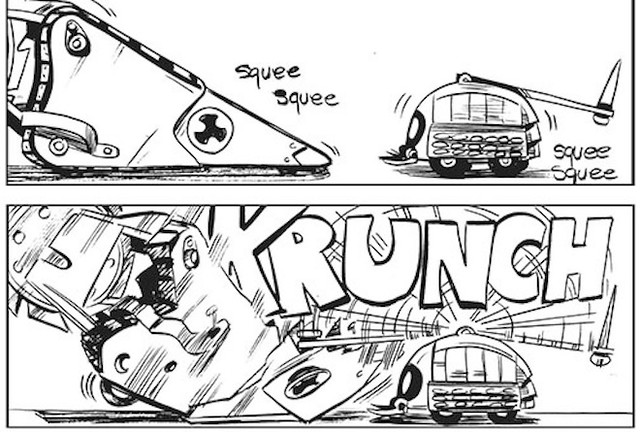