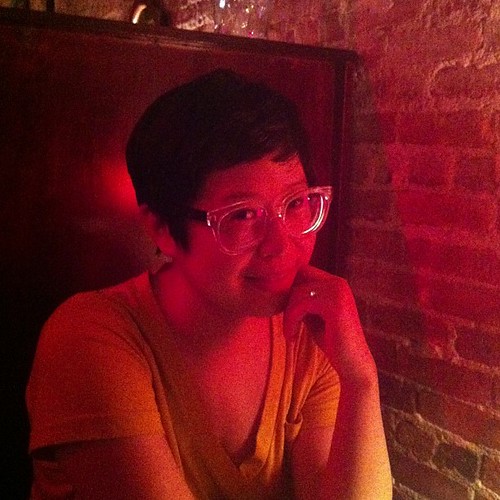 It is funny; we may have happily left San Francisco, but the aftermath of our trip is still ongoing, from Vertigo in the park to having lunch on Friday & dinner on Monday with Esmé...& now

fordmadoxfraud is coming into town? Actually, that probably says more about the last week of August than anything else, since

onatopofthings is visiting as well, & so many people at work are on vacation. Speaking of work, I'm probably due another Tor.com index post. So Monday, like I said, was hanging with Esmé; Jennifer & I went to our local little...inn? It is a pub, with a decent bar & decent food. I guess you just call it a pub, but that almost feels like I'm trying to be British. Oh also I'd had some pretty messed up nightmares, the kind I used to have every couple of days but now don't get all that often. The whole spectrum, stress dreams, nightmares, sleep paralysis, shame & fear, great stuff. A fluorescent bipedal aardvark. Tuesday we got some bad news about one of our friends, hot on the heels of some bad news about a co-worker, & then Brian & I met up with Kat & Jocelyn at Boxcar before heading back to Kat's apartment, where we met up with Jennifer. Then last night, we cancelled Television Night to go on a date to the Emeli Sande concert in Central Park. I had been teasing Jenny about it, calling it Irish Yodeling, oh wait, I mean Scottish Warbling, but it was mostly me being self-deprecating about the music I listened too in high school & college. My stomach was feeling messed up when we got to the show though, so I was quiet & out of sorts. I had to clarify that I wasn't being a sulk or a poor sport, just that my stomach was bothering me. It was raining & we were standing so I wanted to be clear that I wasn't being passive aggressive or throwing a tantrum or anything just...ill. We met some of her former co-workers from the library, so she got to be in ex-librarian mode, which is fun, since she's in start-up mode so often now. We left half way through Sande's set, when she finally came out, because of my guts.
Collapse