You know, despite saying I'll get better, I still end up playing catch up with the everyday stuff of life. Which, frankly, is fine, since I'm a boring grown-up. I was talking about what Adventure Time character I'd be-- Terra & I still watch it together-- guessing Lemongrab or Magic Man, but I'm more Hunson Abadeer these days, really. I mean, I'll write up my Oubliette campaign or my musing on house rules, but otherwise...I just sort of am a living adult. I wake up, I go to work, I socialize on my lunch break, I come home, take care of errands & food, wait for Jennifer to get home, then we watch The West Wing. The story of The West Wing is that season four is the best one, but then the showrunners leave & it becomes a super boring melodrama. I'm hoping it picks up once actors start leaving. We also watched a bunch of Scandal, which is just a soap opera that has White House sets to use. I don't like it. We also watch Whodunit, which is a hilarious reality show that is layers upon layers of fake, but is enjoyable none the less. I think I have an "Uncanny Valley" for television; I like bad shows that are entertaining-- the first bump, the "anthropomorphic animal" bump-- & then I hate other shows until they wrap around to be actually good. I vastly prefer schlock to mediocre, camp to drama. While I wait for Jenny to come home I have been throwing on Tron: Uprising which is just so-so in terms of plot-- it does have Bruce Boxleitner in it!-- but is really well choreographed. The fights & escapes & exploits are all very...ninja.

Social stuff, though, I do that too. I met this woman Liz at Katie's birthday party, & we've been getting lunch together occasionally, she's cool. I do a lot of hanging out on my lunch break; an hour is a good chunk of time to spend with someone, not too much & not to little. Managed misanthropy, that's my motto! One of 'em, anyway. I've been getting lunch with Burke pretty frequently, too; we murdered a pizza & a salad the other day. Let me see here; Jennifer has been having a rough week at work, & so I wanted a change of pace for her, not just the come home & decompress formula. That works for me, since I have the chunk of time after work & before she comes home to do my own thing, but there is no such liminal space for her. Anyhow, instead of going to the gym on Thursday, I blew it off & hung out with Brian & Jocelyn at Kat's apartment, & when Jennifer got off work we all went to Von for some wine & then next door to Bianca for dinner. Not too shabby, if not quite a date night. Speaking of the gym, though, I've been gym buddies on my half-day Fridays. I went with Ali last Friday & did a nice set before we came back & watched the first episode of Gilmore Girls; then yesterday Mollie helped me shop for pants & then we hit the YMCA like a couple of bosses. Boom. Right now Jenny & I are babysitting Olivia-- she's munching on a muffin in the chair next to me-- but I still have to go to the gym again later, since I blew off Thursday. Make-up day! 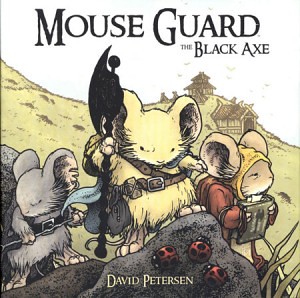 Mouse Guard comics rule!
This one is no exception.
There's Reaver weasels!

This is the second
Legend of the Five Rings book
I've read. It had guns.

The Watchers Out of Time by August Derleth.

He doesn't "get" it.
Well, not the cosmology.
Haunted houses, sure.

Invent the stirrup.
My tips for time travelers.
Stirrups & hygiene.