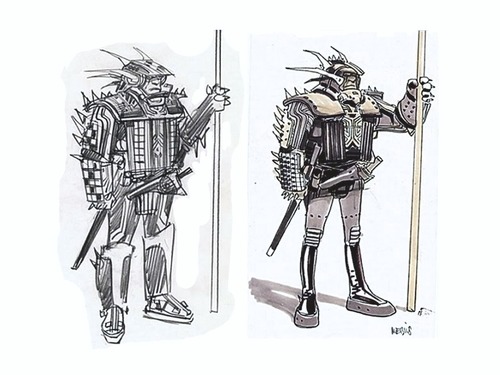 (The Shoshin, the Broken Hearted; Tron concept art by Moebius.)

Last Thursday we continued our Oubliette campaign in the Shogunate. The first to show up was Luke, who plays Haru o-Kitsune, the clever Kuge diplomat. Mollie & Nicole were next, who play Mio Yudai, the Sohei trained Yojimbo & Keku Kin, the cyborg savant of the Kin Zaibatsu, respectively. Last but not least is our newcomer,

fatbutts, as Amina o-Kitsune, the Bushi warrior. Last session saw them headed into the badlands of the Usagi family, seeking to find a band of mercenaries called the "Broken Hearted," the Shoshin. Instead, they found giant scorpions, who cut out the legs of Keku's palanquin bearers, killing them, & dragged a screaming horse under the dunes. This session begun there, with Keku & Amina both wrecked with a hangover from their drinking contest...& two armed soldiers coming cautiously around a dune. By their mon, their heraldry, they can tell they are the Shoshin, the "Heartbroken." They have lacquered spikes, spines & quills all over their armor, looking barbed & armed with naginatas. After a brief discussion, the mount hardened little mountain horses, & lead the party to their destination. 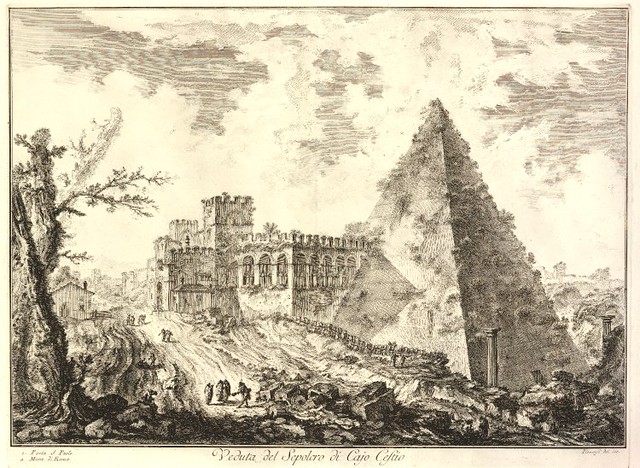 Off they go to Kakusui-en! Escorted by two soldiers who I oh-so-originally name "Toshiro" & "Mifune," when the players ask them their names. The Pyramid Gardens! Remember, I created Kakusui-en randomly? I was fooling around & the result just clicked, so I went with it. Thanks, GameMastery Guide! An oasis in the midst of the cold clay desert, a black pyramid & gushing fountains, a skull-faced temple & a weird arboretum of extinct trees, a longhouse for the warlord & a camp in for his troops, provisioning themselves from the garden & the springs. The players are led in...& made to wait. For an hour. Haru & Amina are steaming at the insult of it. Around them, they see the Broken Hearted are a pretty significant fighting force, with archers, infantry, cavalry-- or at least dragoons-- & a degree of discipline, even fanaticism. After a time, they are taken in to the fort of logs, to spaces segmented out by rice paper walls & folding screens. They are given handmaids to help them make themselves presentable, & given a moment to collect their thoughts & pray.

The leader of this warband is Goro Tako, who the players first met as children back at the Geiko Flower Town resort of Joko Izumi. When the player characters went deeper into the ruined castle, to rescue the apprentice Geiko Wakana & eventually met the naga, Goro & his compatriots ran...& that has haunted Goro, & driven him to make something of himself. He & the party have differing memories & interpretations of that night, but all of it is news to Amina o-Kistune, who wasn't there at all. The adult Goro isn't full of bluster, instead shooting for something more like sauve. No one asks him about the terrible scars across his face, but the court-trained Kuge & the polymath Mukade, Haru & Keku, both realize that "broken hearted" is a play on words-- really, a play on characters, on logogram-- involving the word "scar." 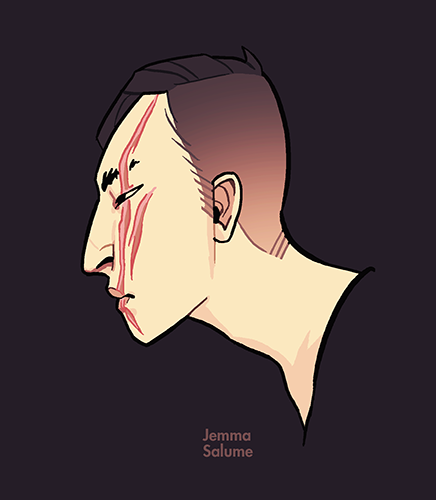 Though Haru & Keku have each been cagey about their agenda, Goro isn't so coy. They are here to bid on his...well, his weapons of mass destruction. He doesn't have such loose lips about how he came by...well, whatever it is he came by. In fact, let's fix that; Goro wants to take them out to see the merchandise. Out in the middle of the troops impromptu barracks, there is a round wooden table. Next to the table is a tangle of brightly coloured but faded metal, in gold & blue & red. Like Optimus Prime was run through the wood chipper & a trash compactor. On the table are ten jars, ceramic jars; not ceramic as in, clay pots, but rather hardened military grade ceramic. Each has a design topping it; they are Al-Kem canopic jars. Red skull, black frog, white scarab, black scarab, red lion, black lion, white falcon, green scarab, black skull, white skull.

Between Haru's delving into forbidden lore & Keku's technical skills, the group probably knows more separately than it does together; will they work together or compete with each other? Amina, boldly, decides to physically handle some jars; Goro had said earlier that he didn't gamble any more, having found a fondness for higher stakes, & they joke about that now, as she picks up the black lion, the red lion, & finally the white scarab. It leaves her feeling...off. Itchy. The group retreats to discuss their options & Amina o-Kistune is doing a bit of a junkie shuffle. Starting to worry, they argue; should they put her in the water? Will that taint the water? Should they even be touching her? Goro suggests priests-- there are some in that skeleton temple, after all-- but doesn't think doctors will help. Collecting herself, Amina does some unfamiliar yoga on the ground & seems centered, fine. Goro announces that the next group will be here tomorrow, & when they & everyone else has finished arriving, he'll start the bidding...
Collapse