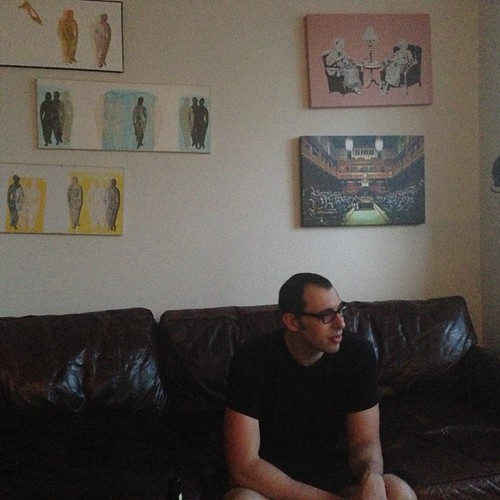 Alright, just a sloppy run-down of what I've been up to, since I've been bad at that. That picture above is from Jennifer; she took it at a Taco Party I had with a bunch of Gothamist friends, which I thought was what I did on Saturday, but then I realized that I had Book Club on Saturday, & that I was a whole week off on my catch-up post. Not that I could tell you what I did two weeks ago, otherwise; my brain just doesn't work like that, which is why having a place online that I keep current is helpful to me. What did I do last week? So here is the placeholder for the last week or so, so I don't find myself in this position again. Alright, last Friday was seeing Monkey, then the aforementioned book club. On Sunday we took the train to the beach with Kira & Olivia. I'd never been to Long Beach; we had some curry & bratwurst first which was...really good in fact. We met up with Donna & Frank there; we are going to their wedding in San Francisco next month, but we haven't really ever hung out with Frank. We swam & bodysurfed so I guess that is a form of bonding. Olivia, despite being a baby covered only in a diaper & sand, didn't burn, which is crazy, since she sure wasn't good at staying in the shade. The work week was not so jam packed with action; I mostly came home & continued to blitz through The West Wing. Terra, who has the advantage of being pregnant, has actually caught up to me & Jennifer, though at this point she might have passed us. Yep, I just checked, she's in season five now. Friday I spent hanging out with Matt; we met Kat for lunch, goofed around in Alphabet City for a bit, met back up with Kat & with Brian & Jocelyn & Henry for a bit. What is the name for that, when you use serial conjunctions? In this case because "Brian & Jocelyn" are a couple, it is a discreet unit. Anyhow, we ended the night just watching The Avengers because they hadn't seen it & I am lame & didn't feel like going out for drinks. Saturday...hey, that was yesterday! We babysat for a while, did laundry while doing so, came home, tried to relax for a bit-- Jennifer had a barnburner Friday night herself-- before I went out to meet up with Gothamist trolls again. It is like, the year anniversary of us meeting up. Burgers & beers was the solution. I left there-- more Alphabet City-- & headed to Williamsburg to go to

ranai's birthday party at the Counting Room. It was a nice time-- I ended up talking about The Protomen & I didn't start that conversation!-- but we left just as it was starting to heat up, because I am an old fuddy-duddy who turns back into a bat & a pumpkin if I stay out too late. Today I actually slept in, which never happens. 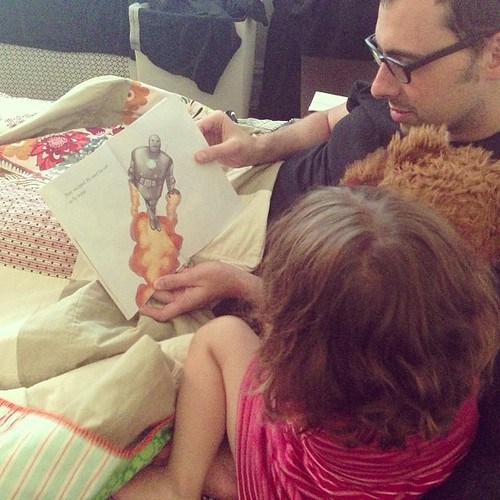 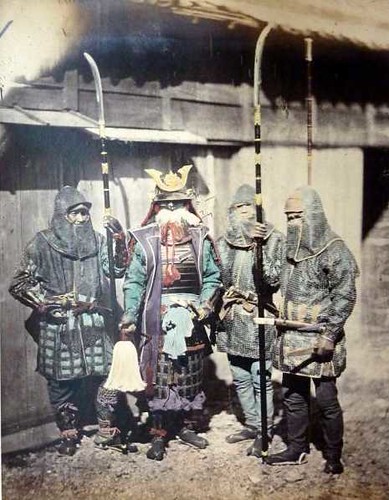 I mentioned when I discussed encumbrance in Oubliette that I wanted to move toward a generic armor system. Generic is probably the wrong word for it; abstract would be better. The difference between a chain shirt & leather armor is largely situational; better to make the back-end math transparent & broad, to make it low friction. I decided to do the same thing with weapons (& other equipment, for that matter), which is already the direction World of Darkness tends towards, with the Armory books excluded. I decided to make the katana, or long sword, the sort of default; a +3 attack bonus. That said, there are elements about a particular weapon that would lead you to choose it; a warhammer to fight the guy in heavy armor, a dagger because you can smuggle it in between your breasts, whatever. Some of that can be covered in Encumbrance & Concealment, but some of it...well, I think the best way to use something very much like Character Traits. I've gone ahead & given them a rough gloss of mechanics, but really the hook is more that the trait exists; the math is there more as a guideline than anything else. My basic rule of thumb is that a better concealability or lower encumbrance can be "traded" for by lowering the attack bonus...but not vice versa. In the same way, attack bonus can be "spent" on a trait or two. What follows are some quick weapon mechanics that I whipped up using that method. This is the first real draft, however, & I don't know how the math will actually play...but I think the balance is pretty good.

Light: Use better of Strength or Dexterity
Sneak Attack: If target is denied Defense, add Wits or Manipulation to attack roll.
Reach: +1 to Defense, & can attack one hex or square further.
Disarm: Can be used to disarm; compare successes to targets Dexterity rather than as damage.
Two-handed: Off-hand cannot be used.
Armor Piercing: Ignores armor bonus equal to wielder's Strength.
Collapse