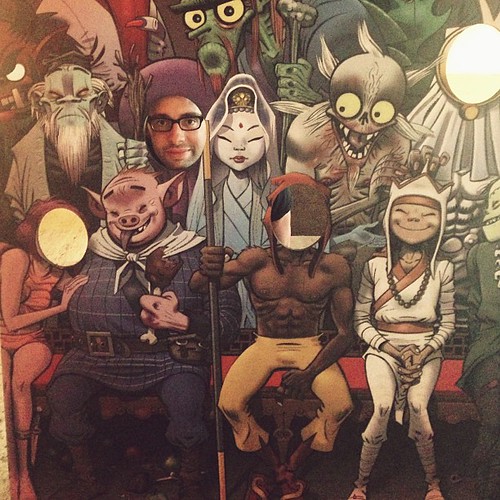 Last night I went to go see Monkey: Journey to the West with Jennifer. It has been pretty thoroughly advertised in the city, but in case you don't know what it is-- it is basically Chinese opera & acrobatics, filtered through The Gorillaz. Chen Shi-Zheng directed it & Damon Albarn & Jamie Hewlett did the composing & visual concept work; the three of them really created a pretty great pitch. Maybe you know the story of the Monkey King, Sun Wukong, who hatched from a stone struck by lighting & immediately declares himself blasphemously to be the Great Sage Equal to Heaven. It is an intensely Chinese story while at the same time being an intensely archetypal story; it is a story of the clash between Buddhism & Taoism & temporal politics, as well as a story of a mythic trickster...who learns a certain kind of enlightenment along the way. Relatedly, this is why when Gene Luen Yang Christianized the story in American Born Chinese I sort of struggled with it. On one hand, the fact that it is a very adaptable story makes me want to consider adaptation to be a good thing; on the other, it is an intensely Buddhist (& Daoist in trappings, but mostly Buddhist in message) story & making it Christian sort of feels like missing the point.

As for the production itself, it is a lot of fun. The first half is much more "Gorillaz-y" & the second half is much more "Chinese Opera-y" but the best parts of it, by far, where when those overlapped...which was quite frequently. I liked it a lot. We had "nose bleed" seats pretty high up, so let me get that out of the way first. Being up high meant I didn't get to see the costume design as much as I would have liked, but part of the point of opera & acrobatics is to telegraph your performance, right? The action on stage was pretty intelligible, especially the Monkey King's antics & the acrobats. There was some action high up on the stage that the angle cut off, but thems the breaks. When we saw Uncle Vanya up in the tippy-top of the audience, it was a pain in the neck-- literally!-- but here because so much of it is song & dance & contortion, it wasn't as big of a hurdle. Seriously though, maybe I should get opera glasses, some classy binoculars.

The star of the show-- obviously-- is the actor who plays Sun Wukong, the Monkey King. His acting is...predominantly primate pantomime? A lot of monkey-like chirps & hisses, scratching & stomping. Very fun; I started cracking up from the first moment he was on stage. My favorite parts of him were his entrance-- I just think it is hilarious that the Monkey King hatches from a stone & then is like, "I'm cooler than Jesus & Buddha! Oh no, I need to be immortal!" like, first thing. Cracks me up. That, & I really liked his "rap battle" with Princess Iron Fan. Oh, & I really like that after the boy-monk Tripitaka exiles him from the adventuring party-- what, you don't see a high level cleric, a goblin warrior, a pig-man & the Monkey King as a Dungeons & Dragons group? I did!-- he goes off into a side stage & sulks & smokes cigarettes. When the goblin Sandy comes to get him, they break the scene by speaking in English...& the monster chides him for smoking. Apart from that I would say that over-all my favorite scene, & side character, is White Skeleton Demon. Her glow-in-the-dark costume & lilting paean to cannibalism was spooky & wondrous. Me, I liked the first half the best, when Monkey King is mostly just a real jerk & there are plenty of animated interludes; Jenny liked the latter half better. I have to admit...I'd slept poorly all week & woke up at five in the morning, so as things slowed down & the amphitheater heated up, I had to pinch my skin a couple times. Not flattering but I should be honest about what might be biasing me.

The Hum and the Shiver by Alex Bledsoe.

People of Danu,
sing your songs in Tír na nÓg:
The Appalachians.

This was my pick for Eleven-Books Club, my third pick after China Miéville's Kraken & the first volume of Invisibles. Why did I pick it? Well, I'll tell you why: because Alex Bledsoe's Eddie LaCrosse books are a bucketload of fun. I really like them-- you should give them a stab, really-- & I knew that other people similarly really liked his Tufa novels, of which this is the first.

onatopofthings in particular. There was no doubt in my mind that I'd read them sooner or later, but when my eyes fell on the spine of The Hum & the Shiver while I was trying to think of my next pick, I knew I'd hit on something. A favorite around the office, I knew it had a pretty diverse fan base, which meant it had a decent shot of being well received by the group. We can get to that later though. Let's talk about the book itself. The deal is: what if one of the small towns of the Appalachian mountains wasn't just full of meth & Mountain Dew, but instead was the last bastion of fairies?

Oh, Bledsoe underplays it-- he doesn't quite comes out & explain the plot through exposition until the fringe right wing blogger starts acting a damn fool-- but that is what it is. The Tufa are the Tuatha Dé Danann, brown-skinned & white-toothed, secret-songed & music-winged. Speaking of which, brief side note: when Andy Silliphant says "skin that song iron," & they joke about his weird attempts to coin a catchphrase, all I can hear is a skald's kennings. I liked this book but...I don't know that I liked the protagonist? Bronwyn spends too much time doubting & denying & then...that denials just becomes her...answer to everything? I mean, the final compromise with Terry-Joe & the pastor I liked because it is messy, which makes it believable, but Brownyn's triumph is ultimately one of fate-- a fancy word for deus ex machina-- not character.

You know who I do like a lot though? Don Swayback. He's the real story, if you ask me; he overcomes. I also liked the mention & brief appearance of the Sin-Eater. It is a favorite trick of Bledsoe: he imagines a full world, & then as he writes, he gets along to filling in the blanks. You'll find out his deal sooner or later, I'm sure. & while we're talking about things I'm sure of, I sure did hate Pafford & Dwayne; Bledsoe knows what he's about when he builds characters, which makes me think that it isn't a failure on his part to make me like Bronwyn...I just don't like her. Personally, I was hoping she'd start a third clan, or sing some new songs; all that talk of destiny, but what do we get out of it? She does her own thing. It isn't systemic, either; if she'd broken the hold of the pure-blooded, that would be one thing. See, I don't know if it would be the right thing-- would the Tufa just vanish, then? Or would they, like Don, still hear the night wind?-- but it would be a thing.

I also...well, I also didn't care for Pastor Chess, though I didn't mind him when the other Tufa were lecturing him. When the haint tells him in a dream "you are more than your job. The preacher doesn't have to be right. Craig does[,]" I was like, right on. Then again, when Pastor Landers tells him "[w]e also have noses that run & feet that smell. Sometimes the universe just doesn't make sense[,]" I had to grit my teeth. More "tides come in, tides go out" nonsense. Noses run because they are dark, moist holes that go into your body, & so you have defenses ready to flush stuff out of them; feet smell because bacteria eat foot sweat. These are not mysterious ways. Then again, the pastors bugging the crap out of me may be my own baggage.

I guess my thesis here is: I liked this book! I didn't particularly like the main characters, though, which means...well, it means maybe I'll like the second book better? My issues were largely personal preference, so hopefully Wisp of a Thing will be right up my alley. I like fairytales, & I like faeries. You know me. The strange elves of old, your Tolkien elves, your Book of Invasions, that is how I roll. There is an issue of...exoticism? That is, an insular ethnic enclave of...magical people can be problematic. That is something I'm eager to talk about with the book group; I think Bledsoe didn't map the Tufa onto Native American issues, but I want to hear the thoughts of those that did. 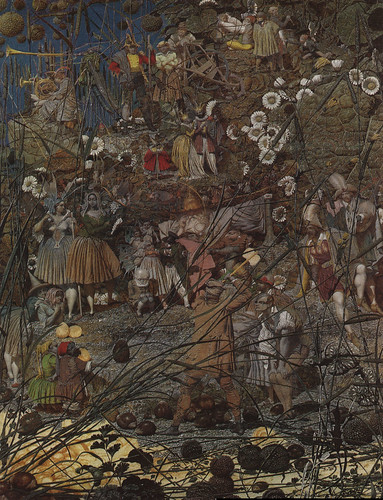