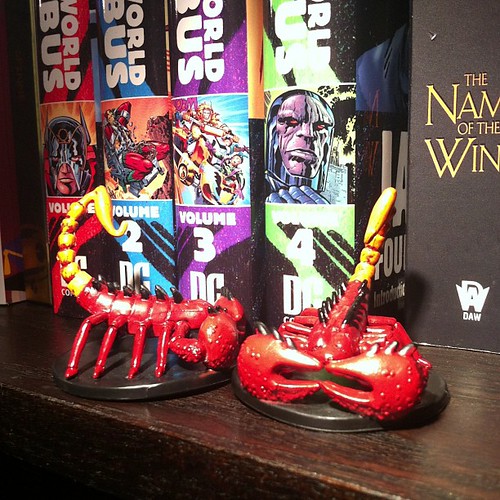 After far too long of a hiatus-- in large part due to Strange Tales of Preston Stagger & general lazybones-- we finally met & resumed the current Oubliette campaign! "We" is a slightly different group of players; Silissa just had a baby, so she's out & she took Eric with her. Our intrepid gang now includes Nicole's cyborg corporate climber, Keku Kin, the Kin Mukade. She represents a lone faction, while the others have, interestingly enough, evolved into another. Luke plays Haru o-Kitsune, the clever diplomat Kuge, with Mollie as Mio Yudai, his Sohei Yojimbo bodyguard. They are newly joined by

fatbutts, playing Amina o-Kitsune, the noble Bushi with an interesting past. The session starts with the players being giving their marching orders; go to an auction! A small man with alopecia & reversible knees asks Keku on behalf of the Kin's investors, while the Kitsune daimyo himself-- who has a very "working class cop" look, with, oddly enough, bright red hair-- orders Haru & Amina to go. To go where? South, to the far south, down into the Usagi badlands, the Suffering Lands. Why? Because a local warlord, a criminal in charge of a mercenary gang, has come into possession of some ancient Al-Kem weapons of mass destruction...& is looking to auction them off. Who? Why, Goro Tako, the bully from their childhood adventures at Joko Izumi!

The players meet in the Suffering Lands, a cold, orange, hilly desert populated by two-humped Bactrian camels...& giant scorpions! The latter perhaps most germanely. Starting the scene in media res (you know you are supposed to say the s?) with a scorpion having killed the palanquin bearers Keku hired. The nobles, with Mio & the manservant Gong, come just in the nick of time. The fight isn't easy; Mio flips it & people get stabs at the soft underbelly, another scorpion burrows out, cuts the legs off a horse with its claws & drags it screaming into the sand pit, & eventually-- between Amina's katana & bow, Mio's naginata, & even Haru's wakizashi-- an opening is left for Keku to use the clever spring loaded dagger & cut in through the scorpion's book gills, finishing it. The party sets up camp & gets to drinking, hardcore; there is a drinking contest & the group is drinking tea from hallucinogenic herbs, more over. Amina ends up passed out, owing Keku a favor, but the essentially sober Haru-- whose time in the Toxic Jungle gave him a heck of a resistance-- corners Keku, grilling her & threatening her, to determine they yes; she is going to the same weapons of terror auction as they are...

You're All Just Jealous of My Jetpack by Tom Gauld.

I didn't have a lot to say when I blogged about Goliath & I don't have a lot to say now. These are really really funny; conceptually & in execution. Except when they are poignant instead. Except when they are poignant & funny, at the same time. I wanted to write something more, because I don't want my brevity to see like a lack of enthusiasm but really I think the best way for you to experience what Tom Gauld's cartoons are like are to go to his Tumblr & see for yourself. Visually they aren't anything like it, but in tone they kind of remind me of xkcd, only instead of being nerdy in a science & computers way, Gauld is nerdy in a literary way. Anyhow I really like it, & I also really like the list of characters for an epic story, so I'm going to post it again. Stock characters are my favorite! Which probably explains why I like superhero comics, come to think of it. 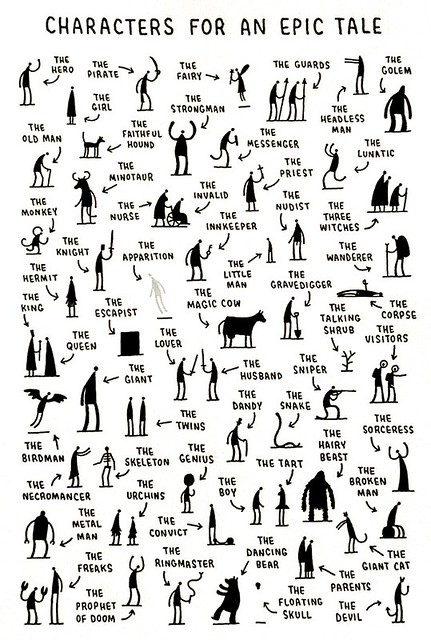