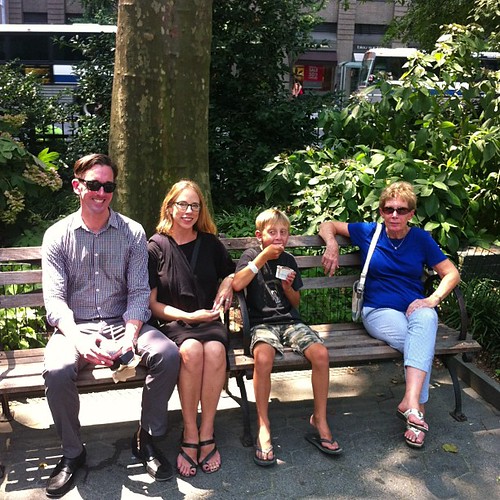 Well! The last time I saw

scythrop was shortly after having three titanium plates put into my skull. He was the first person I saw after I had "recovered," though if memory serves, I was already exhausted by the time I got there. Still, I didn't know when the next time I'd get to see him & the lovely S would be, so I kept calm & carried on. Turned out to be the right call, since then I didn't see him for a decade...& then it was so hot outside that I was basically immediately exhausted. A note on the weather: climate change is real & Metropolis is going to be hit by hurricanes & heat waves with increasing regularity. Get with the program. Anyhow, Scythrop brought with him S & Wm & W, & we had fried chicken & ice cream. Oh have I mentioned that my gym routine has been pretty crappy, more like two & a half times a week lately? I have to step up my game. Then home, home &

ranai's birthday with the crew,

fatbutts & James & I mean obviously Jennifer. We rocked out to some Drunk History-- you are all heroes to me-- & then to the finale of the second season of the Australian Beauty & the Geek. Fun times! The other day, what, Jennifer & I had a very nice dinner date & hung out together watching season four of The West Wing which has moved up from pretty good to pretty great. Really though that is about it. I did a bunch of writing & not enough reading. Nor enough sleeping. Now I'm looking at the clock & seeing that it is time for me to jump in the shower & go on into work. In other words, everything is fairly mundane, but my rich internal life keeps banality at bay.
Collapse