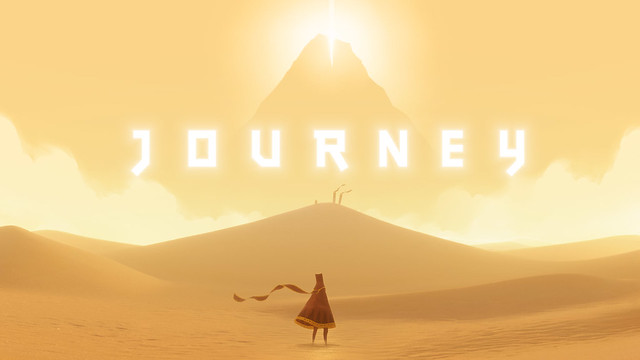 The first time I played through Journey, I had no idea what to expect. I was first made aware of it by seeing cosplay of the Pilgrims; who were those guys? I looked into it & saw that it was really well regarded, so I downloaded it & when I finished utterly beating Skyrim I gave it a whirl, with no preconceived notions. I found it really captivating; the storyline is alternatingly intuitive & symbolic while the game play is limited to movement, jumping & flying, & singing chirping notes of music. You just...travel toward the mountain, interacting predominantly with magic carpet creatures, & other Pilgrims like yourself. On my first play through, I found the AI on the other Travelers to be really random; some would show me an optimal path through a level, others would show me secrets, but others would stupidly stand in my way when I was trying to go somewhere. Anyone who has played a video game with a sidekick has gotten frustrated at the AI always being in the way. "I am shooting at them, stop walking in front of me!" So I pushed the NPC out of the way, because a horrifying enemy-- the antagonists are scary!-- was on the way; I escaped but it got my Companion. Then...at the end of the game, there was a little "Companions encountered along the way..." part of the credits. Oh no. The other Pilgrims weren't AI, they were other players, cooperative players! I totally pushed my friend out of the way to escape, tossing them into the lion's den. Oh no! You are anonymous-- no names till the end-- & communicate only through musical chirps & touch. Touching fills up your flight meter-- your scarf-- so the buddy system makes a lot of sense. Yesterday I went to play a level...only to end up playing the whole game again, because my Companion stuck with me. I didn't want to abandon them first, so I ended up skipping the gym & trekking to the Mountain. After the game, someone sent me a message about our shared game, but it is in Japanese, & my Kanji skills are...pretty much non-existant. I mailed them back in Romaji telling them my Japanese is terrible & that I'd had fun sharing our "journey."
Collapse