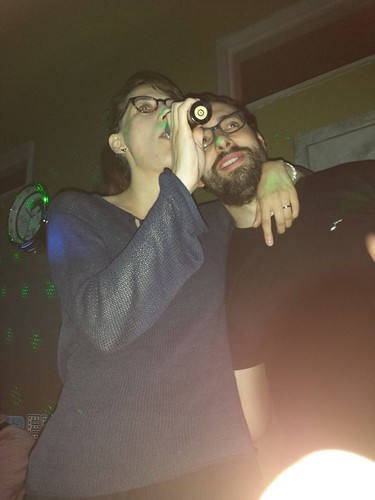 Well, "Strange Tales of Preston Stagger" is concluded! Hooray for me, & hooray for resuming a life where I don't obsessively go over my lines in literally every moment of my free time. Seriously, that is how my brain manages anxiety & stage fright, by becoming a little bit obsessive about making sure I have my lines memorized. Frankly, I think it is a pretty rational response, so I over-indulge in it. It paid off, too; three shows, zero dropped lines. The show was super fun, & a lot of people came...& I think they had fun, too. The first night, Sherene was super effusive, but I think it is because she expected that she was, you know, doing a friend-favor, you know? Like, she was going to suffer through her friend's terrible play. Surprise! The play is actually good! Ha ha! Joke is on you! It was good enough for

onatopofthings to come three times! So that is that. A bunch of my co-workers came the first night, then a few the second, then a few the third. A bunch of my gaming group came the second & third nights. The Television Night crew came on the last day, as did the Gothamist crew. That was a smart night to come, on account of...then I was free! There wasn't a cast party-- sad!-- so we all headed out to karaoke! & by "we all" I mean the Gothamist folks & the Television Night folks. About twenty of us. I tried to rope more people in but nothing doing. Anyhow, we tried going to the place where we had the first Trollathon, but they weren't ready, so we ended up at the place I went with Jennifer's co-workers. I like that venue but they don't have any songs in their library that I want to sing! Either I'm old, or a hipster, or both, I guess. So, we had a nice night, & then