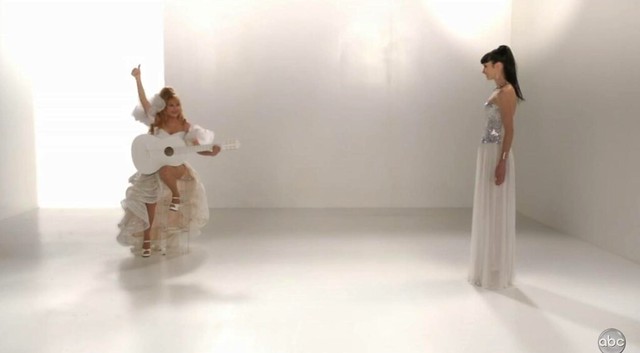 ABC canceled Don't Trust the B-- in Apartment 23, but at least they had the good graces to dump the last few episodes online for us to watch. I don't always fault "executives" for canceling shows-- Dollhouse needed to go, for instance-- but we also live in a world where a Harmon-less Community got renewed & Two Broke Girls is filling in the void of Two & a Half Men. So...yeah, I'm a little upset that Don't Trust the B-- was cancelled. Not Firefly upset, or anything, but disappointed. It was a pretty great sitcom; it added a psychopath to the "hardbitten New Yorker & naive Midwesterner" formula; it is The Odd Couple plus Anna Wintour or something. Jennifer says it is House of Yes-like, which is true, too. Not to mention that the parody fourth wall angle of having James Van Der Beek play "James Van Der Beek." It was never an A+ show, it never really challenged your New Girls or Parks & Recreation but there were definitely vignettes & moments of it that did. We have been filling in the corners of our weekend with the last few episodes, & I'm bummed there aren't any more. I like my middle-brow television, it is like a comfort blanket. There is that Marina & the Diamonds song, that I know about because of that Vriska fanvid: "TV taught me how to feel, now real life has no appeal." Anyhow, I blew off the gym today so that I could make beer with Jennifer, & we've only got a few minutes till the next step!
Collapse