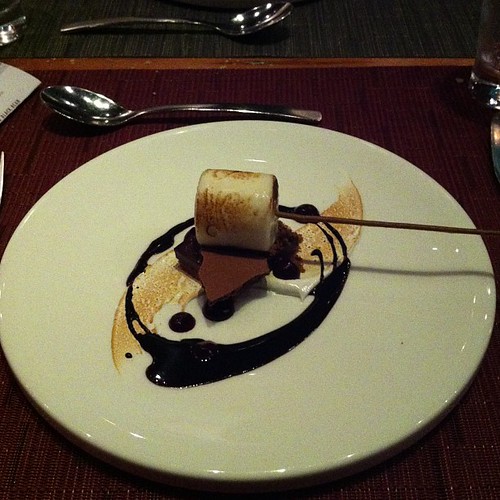 May Twenty-Fifth, you know what that means! Wedding Anniversary. & a whole bunch of other geeky holidays like Star Wars' anniversary, & Towel Day, but most importantly, I got married to Jennifer! What did we do, what did we do. Well, I gave her a beer brewing kit, since she'd been talking about wanting to do that-- a gift for her, but for both of us! Right? Then I popped over to the gym for a bit, came back & then we went to go say sayonara to

fordmadoxfraud (again) & Edbury. I actually didn't know that was what we were doing, so it was a fun little surprise. Drank a glass of "Stillwater Import Series Vol. 3: Jaded" & "Barrier Cairn". There was a whole crew of folks there-- the old AD&D gang, the Thunderdome crew, other Kit Marlowe people, etc-- & it was fun to put in an appearance. After that, we jaunted over to thah theatah to see Iron Man Three. That was pretty good! I mean, it was part of the franchise, so it would be hard to blow me away-- you know that smarmy thing Robert Downey Junior does that defines the modern Tony Stark? Yeah, he does a lot of that! It really works but it is what you expect. The anxiety attacks were a nice twist-- & better than alcoholism-- so I don't mean to act like the acting was flat. I like Paltrow as Pepper Potts; I don't get all the hate on for her. Don Cheadle was...jacked! I found him really plausible as an action star, & a fun contrast with the slightly bumbling Stark. What the did with The Mandarin was kind of cool, but I have to admit...the comic book logic behind the traditional Mandarin's power sources, magic rings cut from the engine core of a crashed spaceship? Awesome. Even better that it is a dragon's spaceship. Even more better is that it is the same alien dragon race as Fin Fang Foom. Still, it was a good call, since other than having cool rings, The Mandarin is pretty racist.

After the movie, we went to drop a couple of c-notes at WD~50. We had the tasting menu, & so the first thing I should do is say...it wasn't nearly silly enough. I wanted like, when Tom Haverford had a party in that Parks & Recreation episode, "Two Parties." Or at least that is what I was expecting from "molecular gastronomy." That said, instead we just had like, a Second Wave molecular gastronomy dinner, where the gimmick is used to make good food instead of its own sake. Okay let me do the rundown, starting with cocktails. I had a "Pastrami & Rye" cocktail to start with; I wish I could find out what was in it because it was...potent & tasted...well, pretty much as described. After that I had a couple of "Oliver Clothesoffs" which is a centrifugal mixed gin & kalamata olive uh...well, sort of martini? Jenny had the "Chlorophyllistine" which is vodka, Chartreuse, cucumber, champagne. First course was a red snapper nigiri with salsify & sesame to evoke sushi rice. Next, shrimp in pine nut butter with pine needles & chesnuts. I want everything in pine nut butter. Soup course was a chilled egg drop soup with sea urchin & such. I preferred the "egg on egg on egg" we had at SakaMai.

Next up was the dish I was most looking forward to, sweetbreads with cucumber-lychee & fermented black bean cakes. Thymus, you taste good. I think the next dish, sea scallops with Berber granola, was my favorite. Really clean & zesty. That was followed up a pig tail & artichoke sort of fritter, which was also pretty spot-on. The walleye pike with celery & grapefruit paste I think Jennifer liked, but I've never been crazy about walleye. Squab came next, with tzatziki chips, sun-dried tomato hummus & pickled turnips. Then after that-- there were thirteen courses, but we're past the half-way point!-- was Wagyu flat iron beef, with mushroom jerky. That was nice, but I think Jennifer liked it more than me, again. Now we've moved into the dessert courses, though. Rice wine sorbet with honey-milk crisp & tarragon, yes. Then an American cheese cake. Wait, how do I hyphenate that? American cheese was the type of cheese in the cake. I liked the tamarind-cola foam, but the cake was...too American cheesey. The last dish was marshmallow flavored ice cream or meringue in the shape of a marshmallow, with a stick made of...beer, somehow? On bitter cocoa. A S'more, basically. Oh, well, there was also a beer, malt & pretzel bite, to finish things off. In verdict? It is nice to eat at Michelin starred places. I think we both preferred Blue Hill at Stone Barns though.
Collapse