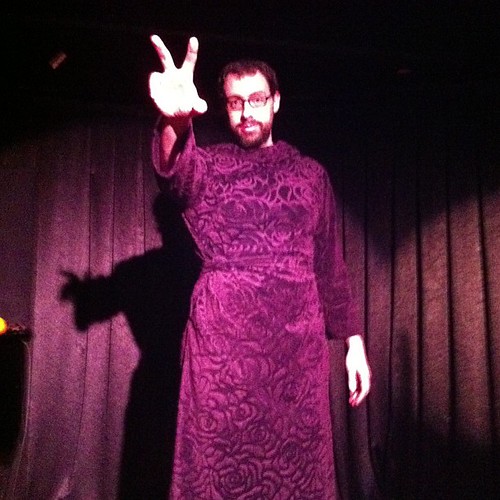 In rather uplifting news, I had a great rehearsal last night for Strange Tales of Preston Stagger; I'm sort of off-book! Or at least, I can do my lines off book, more or less, if the only thing I need to do is focus on remembering them! Still, that is a piece of good news...I'm always anxious about putting these plays on. Doing them is far less enjoyable than having done them you know? I like the accomplishment of it far more than the stress of doing it! Anyhow, I've gotten to the point where the words live inside of my head, so now all I have to do is make sure the spells stay in the right order, that I know when the right time speak the incantations are, & that I do do it all while walking & chewing gum. So! Fun times are on the horizon! Then after rehearsal I came along home for Television Night! With...the cast of characters I had seen the night before! Me, Jennifer,

ranai (with Dennis, last night). My apartment is a much nicer venue than Commonwealth, though. We ended up...watching a Korean soap opera called I Summon You, Gold! Oh that is just the most recent volley in my social life; Monday was hanging out with Matt, Kat, Jocelyn & Brian. I totally ran into a bunch of people I only know through Twitter at the bar, too. Busy little bee, lately. Today has...already been weird. I went to the Container Store & when there was an empty lane, the stranger behind me said "they're ready, Mordicai." What! Who was that! Did I snub someone I should have recognized? Did she hear someone say my name? Who can say. A true mystery.
Collapse