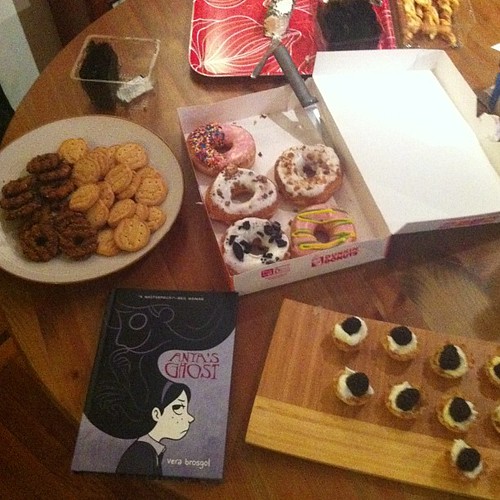 Yesterday was the Eleven-Books Club meet-up for

fatbutts' first pick, Anya's Ghost by Vera Brosgol. I didn't re-review it; in fact, I more re-skimmed it than re-read it. Guilty, guilty, guilty! Still, it left me pretty conversant. We decided on the three themes as "immigrant story, sexual awakening & the supernatural" & argued over whether they should have been more interwoven or if the compartmentalization of them reflected a sort of "home life, school life, after-school life" division that had a certain verisimilitude. The art was roundly applauded & the font being called "helverica" was groaned at, once the confusion was sorted out. Siobhan was a favorite, as was the fact that the "popular girl" was not painted in start moral black & white. The biggest flaw, people said, was that once the supernatural elements turned "bad" the book was pretty clearly laid out with no surprises. The ghost was just a "psycho" with no real empathizable motivations...& then Anya gets self-confidence & stops smoking. A little pat. The book is on an interesting line between middle-grade & YA, & straddles it well, but some people thought maybe it was the middle-grade part, influencing the ending, while others thought there were plenty of middle-grade books with more ambiguous endings. I mostly compare middle-grade endings to A Wrinkle in Time personally, & I thought while it was a little "tied up in a bow" that I was okay with it. Let me see, rolecall; Beatrice was first, with Girl Scout cookies. Then Lilly came, with doughnuts.

carmyarmyofme brought beer with her. Jennifer was next; well, she was just out buying yogurt & berries & phyllo shells & seaweed.

fordmadoxfraud showed up & probably brought something, but I think we ate most of his hors d'œuvre at the big AD&D finale. Terra was awake over in China & so we dialed her in. Mostly so Lilly could booty dance for her, I think. Next time we'll have new members, oh la la, & Jennifer already picked the book: Art Girls are Easy, by Julie Klausner.
Collapse