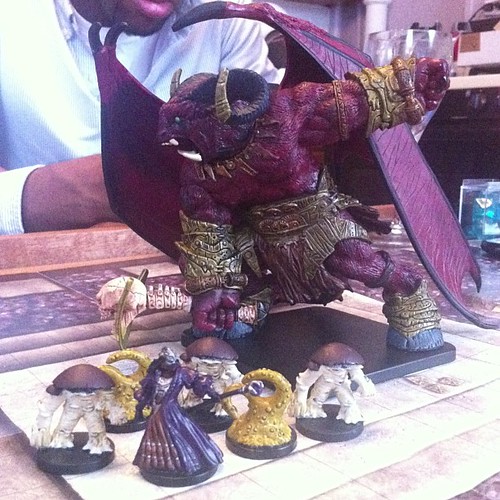 This is it. The final session of

fordmadoxfraud's Stories of Our Youth Advanced Dungeons & Dragons game. The climax of The Temple of Elemental Evil. We've mastered the Elemental Nodes, & we are ready to put an end to a Demon Queen. Aeryn Prow, Alicia's human thief, has the Crown of Zuggtomoy, & is trying not to fall under its sway. Harlow, Ken's half-elf cleric/thief, has a belt of giant strength & a maul of the titans, powerful enough to destroy it. His colleague, Karai,

skycornerless' elf fighter/cleric, has traveled from Kara-Tur to help us destroy the temple. Raz Jericho, Rasheem's human bard, has been touched by wild magic & sprouted dragon wings. Gilda, elf druid, has been tempted by Zuggtomoy's evil, & has taken the elements of air, water & fire inside of herself. Curulókë, my elf thief-archer, has rescued mushroom babies from slavery to evil, rescued jelly babies from slavery to evil, & stolen the divine portfolio of Queen of Fungi from Zuggtomoy for himself. We are a tough, buff crew. Everybody is around level ten & we are ready to do this.

Well, we are almost ready; getting Players to commit to a course of action can be like the proverbial herding of cats. I have two pre-game questions; can I use my skill at fletching to make a harpoon-like arrow out of the +1 dagger of poison that I have, & use the roc feathers I have as fletching? The answer is yes, & I fill the reservoir with the potent draught of paralysis poison I have been saving for a special occasion. Smoke if you got 'em, right? The other thing I do is head to Volgo, the King of the Earth Titans & ask him if he can use some kind of shape metal power to turn the sword Icefang, that I got from the treasure horde of the white dragon, into a recurve shortbow. He does so, but it is infused with wild magic! You remember Volgo; the Earth Node's gem was his heart, but we convinced him to let Curulókë cut it out & sew in a black dragon heart...which had been killed by Raz's rod of wonder. The resulting alchemy of the supernatural caused Volgo to sprout tentacles, & pipes from his chest crooning musically, & lets those around him levitate. The new bow casts dispel magic on its targets...but on the roll of a one, it polymorphs the user into a rabbit. Tempting, but far to risky; Harlowe breaks that curse & I dub it Icewing.

Then we have...arguments! Aeryn, who has a pet goristro demon named Warimere now, who follows her as the bearer of the Demon Queen's crown, wants to find the head of the cult of Iuz, Hedrak, to go free the white dragon. Um...what? We don't have time for that! Also muddying the water is Ziz'zerat, the drow that has been shadowing our party through the Temple. He's approached basically everyone except Curulókë-- which is probably wise-- & now he makes a move to swing Aeryn over to his side. Aeryn is probably planning a double-cross, but this is the drow-- this is the old school, AD&D drow!-- & they are probably planning triple-crosses, quadruple-crosses. As Curulókë is trying to explain-- "He worships treason. His god is literally treachery. He worships Treachery!"-- & things are messy until...out of nowhere Gilda throws a poison dagger at the drow, turns into a bear, & starts mauling the crap out of him! Aeryn uses her rod of passage to teleport Ziz'zerat...to Kara-Tur? See you later, spider-man!

Other things: Harlowe & Karai were gone last session, putting Vigda's body in the Ice Node, sealing it with a wall of ice, & leaving as the frost zombies gathered around it...in reverence? Doing a ritual to make her their ice zombie princess? Who can say. Gilda goes to Volgo & they bond over neither of them having a family, since the Earth Titans are extinct except him. He is a king with no kingdom. Curulókë doesn't care-- being a monarch is a strike against you!-- but Gilda does. They have some like, romantic talk, watch the sunset, that sort of thing, & she convinces him to come back with the party & confront Zuggtomoy with us. Aeryn also sends Warimere into the Fire Node, telling him to rule there in her name, taking the possibility of his betrayal off the menu. Curulókë told her he was willing to support her "experiment," to try to turn the demon "good," but Warimere just talks about eating souls & ravaging babies &...no. & so we begin our last bit of planned. We hide in the secret room we found, & rest a day. Heal everyone, cast some divinations, take a sabbath, & then we sleep another day, so we are all fresh. Good to go. Batteries full, spells memorized, clear eyes, full hearts. It has been tense, & we've labored under the psychological pressures of this place for who knows how long, but we're ready to bring it to an end. Mostly with shooting arrows into things' faces, for Curulókë's part.

We sneak into the Throne Room-- where Curulókë first carved his name in Zuggtomoy's throne, paving the way for his usurpation of Fungi-- & the Crone is there. Probably an aspect of Zuggtomoy, as we've been thinking. She'll probably turn into the giant monster thing, that is our thought. Gilda, with her elemental eyes, can see invisible, sees the creepy bearded Saint Cuthbert guy, hiding. I've been thinking he's an avatar of Saint Cuthbert, but then Harlowe shouts "it's a trap!" & we realize that-- like the fallen paladin Ser Joofer who we are trying to save, like the cannibal Ashram-- he's just defiling the holy order's symbols. I get that; I've been doing the same to Zuggtomoy's unholy symbols. He is the aspect of Iuz, the bridegroom of Zuggtomoy, we find out later. No time for that now; we assemble the crown & destroy it, before anyone can interfere. The Temple of Elemental Evil begins to crumble & the Crone shouts "NO!" before darting into a gate with the avatar of Iuz. & we follow. Into the Pit. The Abyss. A throne, surrounded by an infinite screaming horde of demons & the damned, writhing in a literal pit around the throne. 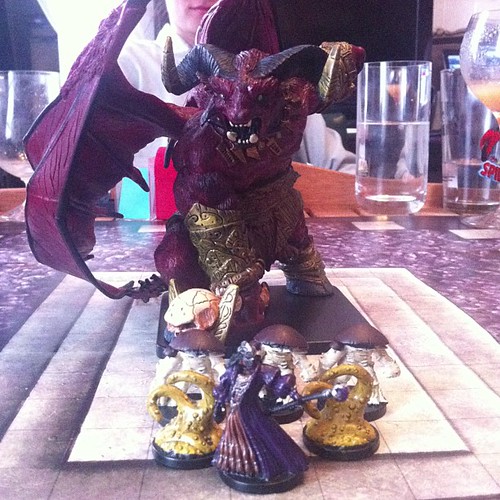 The Crone screams as horns...pierce her eyes from the inside out, as she begins to swell. Her hair falls out & the top of her head splits like rotting fruit, revealing savage jaws. Arms rip from her breast as she grows into a vast, humungous demon. Her divine aspects stripped by Curulókë & Gilda & the party's efforts, she is reduced to just her demonic form. Let's do this thing. The first thing that happens is...magic beans! Horrible, terrible magic beans. Gilda throws a handful of them into the pit, thinking they will grow into Purple Worms, like last time, & they...don't. Some sprout into shrieking fungi-- which the myconids dog whisper into silence-- & some sprout into trees with ruby fruits, but two...grow into ice storms. Curulókë makes both saves but that is still half is hit points, gone. Raz & Karai are both in single digits, & Harlowe & Aeryn take the frost pretty badly, as well. Curulókë's special roc-feather-&-magic-dagger-&-poison arrow...misses, & he spends the rest of his action...getting out of dodge, climbing onto a giant pillar...which, it turns out, is magical, & floats him all the way across the map! Out of the range of the unholy word & related spells thrown at the rest of the party. The myconids scamper away in the other direction.

The battle is pretty intense. Zuggtomoy is not at full strength; only one of the Seals was broken, so she is weak. That is a stroke of luck for us. She keeps vomiting up fungal monsters...& Curulókë keeps freeing them from her control, sending them away from her, to take refuge with the other mushroom babies & slime babies. Volgo uses his earth bending to make a bridge across the demons...& is power word: killed by Zuggtomoy, exploding into a shower of stone & dragon's blood, his music muted forever more. Those flecks of granite embed in Gilda's eye, as he gives her domain over the earth, completing her elemental eye collection. She's...pretty bummed. We all are. Curulókë is shooting arrows from hiding-- with his new magic bow, Icewing, & a x4 backstab multiplier he brings the pain. Aeryn, invisible, is too! She's backstabbing like crazy, so much so that the Iuz aspect uses limited wish to break her invisibility. Aeryn uses her rod of passage to try to make Zuggtomoy fall onto the Iuz avatar, but the demon queen just hovers, instead. Karai has summoned the lightning, & she throws bolt after crackling bolt into Zuggtomoy, the aspect of Iuz caught in the aftershocks. Harlowe tries to get clear of the party, of where Zuggtomoy is targeting, & jumps to the flying tower that the mushroom babies have commandeered. With his belt of giant strength it should be easy, as long as he doesn't roll a....twenty. Of course he does. He falls into the demons & they do enough damage to kill him. No! Or, no wait! Harlowe cast protection from evil on himself! They can't touch him! He still takes falling damage but is alive!

Really, though, this is the Saga of Raz Jericho. Hear his tale! Raz Jericho, who though there was a bridge of stone & though he had dragon wings, chose to crowd surf across the demons. Hear his bard's song, Back Sabbath's "Iron Man!" See...as the crowd turns on him, stomping him out, down to zero hit points. Witness! As Aeryn prow tosses him a mystery potion with a green cap! That we hope is a healing potion, though we found it on an assassin with red capped potions that we assumed were poison. Watch! As Raz drinks it...& the DM opens the Dungeon Master's Guide & we all groan, thinking it was poison, that his dying character drank poison. Hear! The roar of the crowd when it is revealed it is a potion of super-heroism, healing him & empowering him & making the demon audience go wild! Watch! Him fly into the sky, while the druid Gilda shapeshifts into a bat & lands on his shoulder. See! Him draw his rod of wonder & aim it at Zuggtomoy & roll...

Zuggtomoy is dead. The drow come in through the gate & acknowledge Gilda as the Queen of the Temple of Elemental Evil. There is temptation there, Gilda wants the demons to bow-- most do, except the ones that are throwing the sign of the horns at the most metal Raz-- & everyone else, which, no. Curulókë & the mushrooms & slimes don't do kneeling. Still, the drow do, & that is what matters. Instead, we leave through the gate & Gilda closes it behind us, trapping the drow. The Temple is crumbling, but as the master of it, Gilda stops it, the bricks paused in mid-air. We leave; some though the elevator-throne, but me & the new Toadstool Cabinet fly out on the magical tower, through the hole Volgo burrowed out. On the surface, the world is on fire-- Armageddon was midway through, but we've struck a wonderful blow against the end of the world, here-- but in the sky there seem to be giant flying islands, & enormous dolphins, & huge insects...Spelljammers! Even though Encre Panache died, I still feel like his backstory of wild magic & Spelljammer mattered to the campaign. One lands & a anthropomorphic hippo (a Giff!) in a very imperial officers uniform, swarming with medals, a pistol at his side gets out & says, "Aeryn Prow, your mother sent us...." 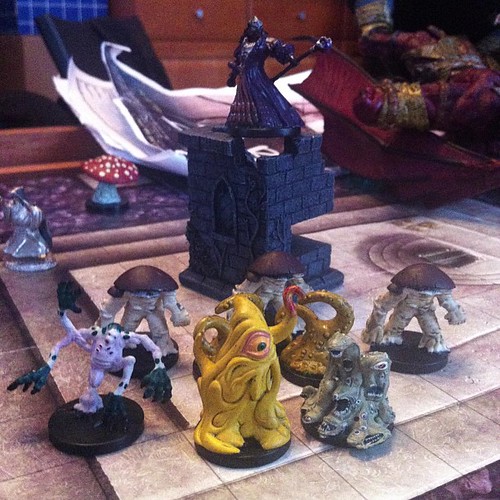