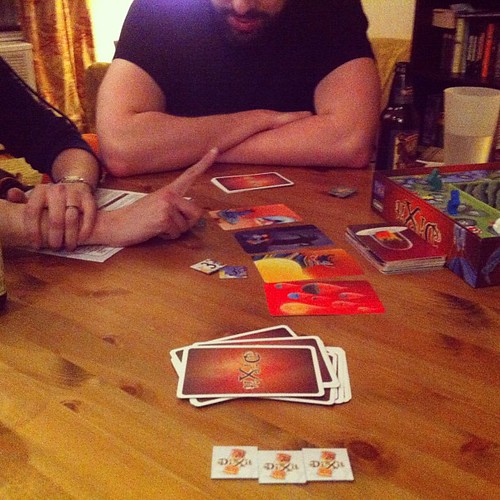 I don't have any particular updates, but I'm going to ramble, since I want to be a little more dedicated about this thing here, & just spare musing on my life oughta provide some kind of opportunity for that. I had another Strange Tales of Preston Stagger rehearsal, this time just me, my scene partner-- I play the crime fighting magicians, Preston Stagger, & she plays by faithful anthropomorphic rabbit sidekick, Rabert-- & the director/villain of the piece. It was a lot of fun; they both have acting backgrounds, so I occasionally feel like a dunce when they break out shorthands or what have you, but she's very funny as Rabert, so yay! Not that I was worried, mind you, but it is fun to be around people who are good at things. Also, we had Television Night! Me, Jennifer,

fatbutts (she took the picture above), James &

fordmadoxfraud was on vacation; I mean, them splitting up wasn't particularly acrimonious, she just left TV Night to give him some space, you know? Anyhow, no drama or anything. We didn't watch anything though; instead we played a French story game called Dixit. There was a TableTop episode about it with Beth Riesgraf from Leverage! That is about it, though. It rained a lot. I went to the gym in the morning; just a short workout but I pushed fairly hard for it being seven ante meridiem. I got to say "I'm two steps ahead of you" to my boss at a key moment, that was fun; I've actually been pretty busy & super helpful at work, in the grand scheme of things. I don't know what else. I've been trying to go out with Jennifer more often, whether just to dinner, or meeting in the city for drinks, or hanging out with friends together. We even watched a basketball game with people! Well, on television. At a bar. But a sports bar! Oh, & I wrote a happy birthday post for Gene Wolfe at Tor.com. 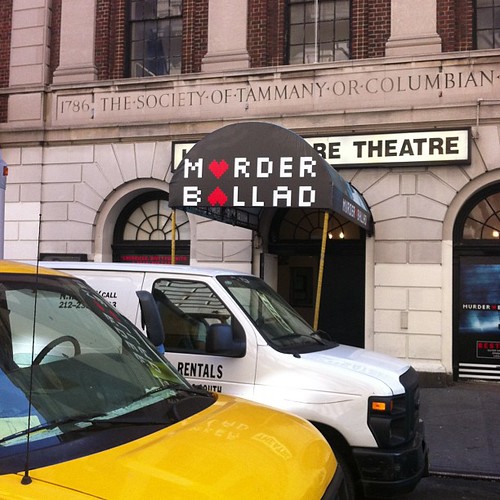 Oh, so I've been sleeping terribly for like a month now. You know, I used to have terrible nightmares; well, I still do, it is just that when I start whimpering in my sleep, I now have someone to protect, or more accurately, kick me. Jennifer's theory is that my bad dreams tie into my sleep apnea, but I still favor my hypothesis: spiritual warfare. I don't remember most of them from this month, but I do remember the two most recent, so if you are one of those crybabies who loves to complain about how they hate hearing about people's dreams (& what's the deal with airplane food, anyway?) consider this your invitation to am-scray. In one, which was more a real nightmare, I was an archeologist with

fordmadoxfraud. We were at an archeological dig, I don't know where but I sort of feel like I want to say that it was a site of Roman occupation in North Africa. I don't mean that factually-- it was dream logic, after all-- but just in terms of character, just descriptively.

We'd gotten some artifacts & gone back to the apartments where we were staying. Sort of a combination of like, those tiny cubical "grandma" apartments of the 70s with lots of terra cotta. Tattooine meets tschokes. The one I was staying in had the shower stall at the foot of the bad; one of those tile squares with one glass door. The wall of it opposite the glass door was mirrored & both had been smashed, crinkling like safety glass. As if someone had punched them, right at head-level. I was sitting on the bed & starting to feel like...well, a serial killer. Just murderous urges. I hid my face in the lined up shattered halo, then took it out, then put it back in. Luckily, I totally know how to handle feeling like the Joker, so I swallowed it, & got up. It was a curse, a curse to kill, but I'm a hex breaker. FMF wasn't so lucky-- he came in with one of the Damascus knives we'd found, trying to kill me with it! & I found out I had been cursed-- I could only call him "Ted." As in "Ted! Wake up! You're cursed! Dammit, I mean Ted! Ted you're cursed!"

The other dream wasn't really a nightmare, but just a large, long, languid dream. I know what it stems from-- I am going to Washington, DC this weekend-- but it didn't stop the dream from being beautiful. The sort of washed out palette of the Númenórean ruins of the Lord of the Rings movies, or Skyrim or Shadow of the Colossus, only more so; you know, the kind of thing that the CGI in those movies & games are trying to evoke. It was the ruins of Washington, DC, vast aqueducts & arches, huge things that spanned miles, and thousands of them. A river the size of the Amazon running through "gates" of sugarfloss stone, skyscraper tall & miles long, arch after arch, some crumbled, some fallen, most standing. Dotting the river were fountains, turbines, spinning flowers of the same stone. Just gorgeous, & for some reason Jennifer was dressed up like Catwoman from The Dark Knight Rises. Just gorgeous. We were exploring around, sometimes on the roads, sometimes clamboring around on massive toppled monoliths, sometimes getting in the water.

Siege and Storm by Leigh Bardugo.

The Wolf's jaws chattered,
gattling a song of lead death
amongst the witches.

I've been sitting on this for a while trying to find something to say about it but it is hard! I liked it a lot; it is the second book in the Grisha Trilogy, an evocative young adult fantasy epic with a sort of Russian bent. I've always been a sucker for the word "darkling"-- talk to a junior high Mordicai & he won't shut up about it-- so I'm a fan of the series, right there. The thing is, it is a very plot driven series! I have a hard time, you know, having anything to say about it on a critical level. I guess the big addition in this book is the addition of a romantic rival-- you've gotta have that triangle, right?-- & I guess I'm rooting for that guy? Yeah, Sturmhond is my dude, I'd put my chips on him. He's the only one with an agenda! Well, & the Apparat but like, a lesson to learn from history: don't bet on Rasputin. He's only like, 75% bulletproof. Hey, do you remember that time Bridget said I danced like a young Rasputin? Of course, now I'm older. & I have a beard. So I guess I'm like a regular Rasputin? Anyhow, so...yeah, like I said. This is a plot heavy book, & the middle of an arc, so it is tough to have something concrete to say. Shadow monsters & machine guns, okay? Not quite "vampire in a rocketship" but it'll do, pig.
Collapse