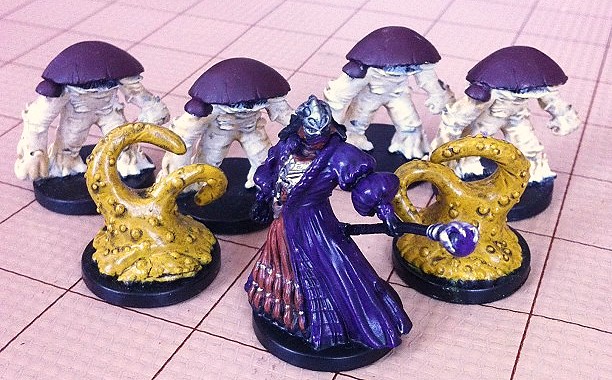 fordmadoxfraud's Stories of Our Youth Advanced Dungeons & Dragons campaign wasn't chockfull of a series of events. Rather, it was taken up by a few, critical, interesting stories. Well, that & eating lots of cheese. The crew from last session was me as Curulókë, elf thief-archer; Alicia as Aeryn Prow, human thief &

fatbutts as Gilda, half-elf druid. The cultists of Johydee, Harlowe & Karai, have disappeared-- maybe to tangle with their arch-rivals, the drow?-- but they've been replaced by Rasheem as Raz Jericho, human bard, who comes back with black dragons wings growing from his back, from eating a dragon heart. With him comes Sargen, deposed priest of the Temple of Elemental Evil, who we met in the Fire Node & then...abandoned in the Fire Node. He's bound to Grizelda Gilda by a wish. Emma is here as well, as Dilly Turduckener, halfling psion, whose malfunctioning dimension door spits her out with us again. She says there is a village of halfling psions living on the petrified body of a dead god in there!

I have a new miniature! Since I took off Jaer the Tailor's padded armor +1 & replaced it with Gramag's elven chain, I figured one was due. I kept the Air Node mask to replace my old veil. After we're done looting the crew & sussing out the poisons-- we're all poisoned, it is no good-- Curulókë looks down the grate in the room where these streams of blood are pouring down. There is a jeweled throne, an exact duplicate of the one in the Crone's chamber. Here is the thing; you know Curulókë has been embarked on a theosophic agenda, a gnostic heist, a thaumaturgical caper, a blasphemy against the profane. He's been carving his name on Zuggtomoy's Thrones & Idols; at first as an attack against her, but with the advent of the mushroom babies & the jelly babies he's specifically decided to rescue them, to steal them away from Zuggtomoy. There is nothing inherently evil about fungi, whether they are slime-molds or toadstools! So, while everyone is arguing over how we should get down-- Raz can fly, Sargen can fly-- Curulókë decides to just climb down. It is tricky-- the chainmail gives him some penalties to his thief skills, & we don't have any rope-- but with Aeryn & Dilly's help, he managed to swing to a wall & climb down.

From here things get... psychedelic. The Throne is surrounded by a pillar of light-- "like that one Crow poster!" I say-- & as soon as I enter it, I'm filled up with psychic power. True seeing, ESP, that sort of thing, usable at will. I know a little bit about mental powers, from Dilly & from the Darkstrider Medal. That is two saves versus spells, that I rolled really well on. When I touch the throne to tag it, ZAP! I'm thrown inside the mind of Zuggtomoy! The Throne is a conduit of divine awareness! I felt something very much like this already, when I defiled the Purple Throne. This time, I'm prepared. I've been working toward this, I've been laying the groundwork, I've been preparing the contextual elements, I've even been psychologically preparing. I decide to give Zuggtomoy a spiritual lobotomy. I try to steal the Platonic concept of "Mushrooms" from her. You know, if the "Fungi" of "Demon Queen of Fungi" in her name is the Platonic ideal of "Evil" joined to the pure notion of "Mushroom", I want to pickpocket the latter. Hey, I'm 10th Level, I'm a master thief, this is my whole deal in this place. Okay, so...all that remains are dice rolls. Constitution, Wisdom & Intelligence. My three worst stats. I roll a exceptional success, a success, & I fail by one-- the curse from the cursed Tome did me in! Still, it is enough to steal it! Curulókë, elf thief-archer, Saint of Mushrooms. Think of him in your hour of need, thieves, whenever slimes or fungi get you down. The divine backlash is rough, though-- one of the mushroom babies explodes, dying for my hubris. Well, hubris? No; we all share the risks on this adventure. Spent, Curulókë passes out.

I'm not the only one wrapped up in spiritual warfare. Gilda has Sargen fly her down & then she pushes his arm into the circle of light. Krakka-doom! a bolt of lightning flies from the throne, just massacring him. Frying him. Dead. Okay. Gilda still goes to pull me out of the circle; when she enters it, she too goes "Avatar state." I don't know what she saw, but I do know this. As Curulókë stole "Mushrooms" from Zuggtomoy, Gilda-- & Grizelda-- have been stealing the Elements from her. With her roc eye & the efreet blood & elemental water the only thing left is to claim Earth. Dilly, too enters psychic combat with Zuggtomoy, through the conduit of Curulókë's mind. It is a lot of back & forth, Dilly against an impossible intellect, halfling versus demigod. Ego whip, tower of iron, id insinuation, thought shield, Raz singing encouraging songs to Dilly's catatonic form, mushrooms helping her build sand castles; back & forth until...against all odds, with her psychic recipe filibuster, Dilly wins! She is able to glean Zuggtomoy's secrets! Most notably: if we assemble the Crown, putting in the Gems from the Nodes, then & only then can we destroy it. Doing so will weaken Zuggtomoy, but it will also allow her to incarnate in the Temple of Elemental Evil, though she will be trapped within. We'll need something powerful enough to destroy it-- the maul of the titans should do it-- but that object will itself be destroyed in the act. Good news!

While this is going on, Aeryn plants a magic bean that she found in a sack; one of a dozen. It...becomes a...purple worm? Yikes! Thinking fast, Aeryn dumps Sargen's body into it's hole. In the creature's scales we see a ring, & Gilda hops down, cuts it out, & hops back out before anything can happen. Good thing, too: she has like nine hit points. In fact-- remember the gem curse on Aeryn? Well, on Gilda & Dilly, too, but Aeryn most germanely. That at the least inopportune moment, at her weakest, a demon would appear? Well, it is that time! & it isn't a scrub demon, either; it is a Goristro! A twenty-two foot tall servent of the Abyss specifically bred from the chaos & evil of the afterlife over eons to be an unholy living siege engine. It isn't good; Curulókë & the surviving mushroom & jelly babies are hiding in a secret passage that he discovered already, sheltering from the purple worm, so he's hidden & ready to go all sniper on the thing...but instead Aeryn talks to it. She's Chaotic Good; she's had a soft spot for the Chaotic Evil creatures she's been charming with the false Charisma 20 that the Crown of Zuggtomoy gives her. She's been all "aww" over the balor, the white dragon, the red dragon. Now is her chance to really use that "we have Chaos in common, anyhow!" attitude. See, at level ten, thieves get followers. Curulókë's will be based on the mushrooms & jellies...but Aeryn (with Raz serenading them with "Rainbow Connection") convinces the demon to follow her, naming it Waromere!
Collapse