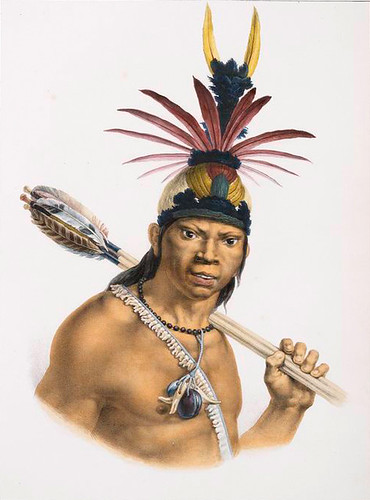 "Well, shee-it. I grew up, well, mebbe round-about-those-parts, you know, over yonder, back where the big old Muddy pulled back her skirts n' things went from under-bubble to up top, you know what I mean? Nowhow, 'couse you don't, you loud folk bein' how you do, with no sense of dreaming memory, 'couse. Well the Temple-- didn't I say there was a temple? 'couse there was a temple, that's what I'm saying, there was a temple, used to be under the Big Muddy Water betwixt Here n' There. Things as good as dried out, gettin' colder all the time-- here now, sees how there is less scaly n' more hairy, mostly?-- n' it took a while but before you know it, Sharky couln' get in to his chapel no more! Couse it was all up in the bayou anyhow. So the real folks moved into it, little by little. Real little by little. It was all full of poison spears n' pufferfish bad, but that's okay, on account of you know, I got frog power from the Plump-Animal-- hallowed is the Croak-- so we were moving in. Sure some real folk died here n' there but real folks had many real babies, anyhow, so the dream was winnin' out, you betcha. We got our own powers, we got mudskipper power, catfish power, sloth power, all kinds. Even family kinds, like we got crystal power.

Well here is the thing, boy, n' listen up. That shark folk temple weren't no shark power temple, you feel me? Shark folk went there n' I guess it works sorta like the shark folk think they are real folk, instead of dream folk. All you loud folk, dream folk, you gotta all pray to your folk-kind, mebbe, more or less have a totem all dressed up like you. Gots to keep your dreams alive, I don't hold it against yah, hoo-whee. I'd sure be all making real folk idols n' hallelujahin' up a storm if I was a dream folk, n' maybe that is what you loud folk do. Shark folks are dream folks-- I'm pretty sure, could be wrong, ain't no shaman but my mama told me so n' my mama Chanda is a heckuva folk n' she said ain't nobody but us n' the orcses real folk I guess-- but they act like real folk, they got themselves temples sure but inside it had real power. Slime-Manta, he's all full of manta power and slime power, or she is, anyway. Bad stuff, but we stole it out of the temple n' sold it back to the shark folk n' Sharky was up to no good but we were clever n' our potlaches with 'em went pretty good, mostly. The gobblers, they do the same thing, but they ain't no good at it; they might as well be alive, blood in the water like.

So that there was my thing, my sitch-ation. Living in the parts of the Slime-Manta temple we're made safe, filled up with our powers and dreams. I lived in the frog place, where Plump-Animal was strong, where we rafters slept on our balsa flats. Therebouts it was near to the manta-places, where it was still bad n' dangerous...which you gotta figure means loot, means stuff for sharky, still. My problem was, though, I ain't got no sense. I never had a lick of it, now I ain't got spit. Just the same, I ain't never missed a meal for trying, so I do okay, that's why they call me Map. My sister, she was Vanna, they called her golden 'cause of how she was, she took after our mamma, she's the best of the real folk. Just golden, everything she do, she wins, it's pretty great n' she looks out for me. Or anyhow she used to, I dunno, I dunno what, I just don't.

Part of some damn bad juju, some manta-dream, some kind of slime-dream, it was...it was no good, I still got the hex on me, you know? All bad. So I talked to mamma Chanda about it, her baby boy n' baby girl. 'cause on no accounts do I have any idea 'bout sister, but me n' Vanna we got into the same trouble. All of mamma's kids, all grans kids, we are the Keo, 'cause that means jewel, n' that's what we have. Mamma says crystals are just solid parts of the dream, n' that account is why folks are so goo-goo for 'em. Sure, well, our crystal, mamma's crystal, it sure is dream-power. I don't know about dream power, just real power, but mamma does, & she said I gotta go, come 'round these parts, maybe change my luck. So I will, see, & I'll keep my eyes open anyhow. I'm a fool, but I ain't always been n' I ain't always gonna be. Jus' you wait n' see." 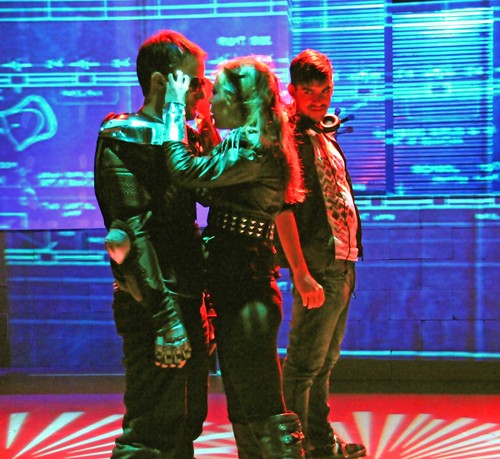 Last night, after drinks & tapas with Matt, Brian, Kat & Jocelyn at Poco, Jennifer & I went on a How About We data to see Goldor $ Mythika: A Hero is Born, a play with a...lot going on. It is based on a true crime story! It is about Dungeons & Dragons! It has a non-linear story jumping from out of order flashbacks to modern day to the near-future. It has a DJ who functions like Cabaret's emcee. Not just high concept, but high concepts. Backstage reviewed it by saying the chaos undercuts the story-- & made some alignment jokes in the bargain-- & that really hits the nail on the head. The Village Voice called the script "exuberant if unfocused" & again, yep. Time Out puts it on the director, saying she "cranks the pace and gimmickry to a humor-and-comprehension-killing level." Well...they all are really...pretty much spot on. I don't know whose feet to put that at-- not the actors, because I enjoyed their performance, particularly the three leads-- but it really did make things a hectic soup pot, though the DJ, played by Bobby Moreno, did his best to keep it in check. The plot is based on a real life couple from the Wasteland who became the "Goth Bonnie & Clyde," kludges DnD in there in a...well, a complicated way. On one hand, hearing people make jokes about eagle's splendor is fun-- oh, so they are playing Third Edition!-- but on the other hand, it wobbles near a sort of hand-wringing moral panic.

The lovers-- Jenny Seastone Stern as Mythyka/Holly & Garrett Neergaard as Goldor/Bart-- empower themselves through the game, but then...use that empowerment to rob the armored truck company that just laid off Goldor & whose owner just sexually harassed Mythyka. It could have been a sort of economic revenge fantasy, it hints that it might be...but I guess the fact that it is anchored in a real life crime meant it had to come crashing down. I for one would have enjoyed Goldor $ Mythyka as a prequel to a cyberpunk revolution-- hey, you don't have to try hard to look at the world right now as a cyberpunk dystopia-- but that isn't what we get. Instead, the house of cards comes crashing down. There is an arc of redemption at the end; I don't buy Mythyka's easy "& then I became a combat medic & everything was wonderful, but Gerri (played by Kristin Griffith) ended up coming full circle, & Goldor's coda had promising verisimilitude. Bubba Weiler as Zeus really has to hold up the future storyline on his own up until then, & he did a great job, but the interweaving was what we were waiting for. Sure, it is easy to see coming, but it is well done. In the end verdict, I liked it; I had complicated feelings about it, it was imperfect, but I liked it. The flip side of that? It was twenty-five bucks. I have no problem trying to sell my friends on an imperfect play that costs ten or fifteen dollars, but twenty-five becomes fifty-- you aren't going to go alone, are you-- & at that point, it becomes harder to really tell your friends to risk it. Sort of academic; today is the last day.
Collapse