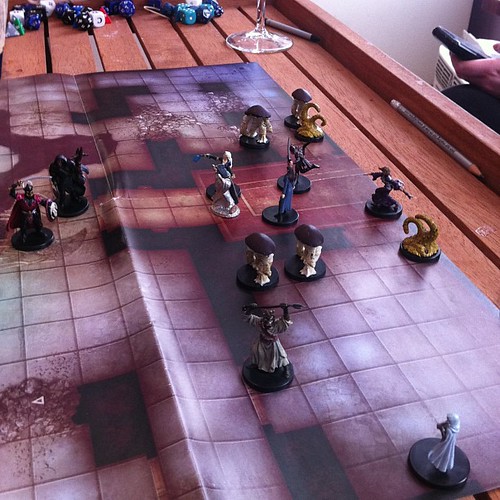 fordmadoxfraud's Stories of Our Youth AD&D campaign. Mostly because the session was a big fight! Not a big brawl, but a more confusing fracas. Spies! Thieves! Assassins! The invisible! We skulked around & then struck! Okay, let me just get the facts down; we left the Earth Node after wrapping up last session, & the first thing that happens is a group reunion! The Earth Node crew was the Thieves Three; my elf thief-archer Curulókë & his adopted mushroom friends & jelly babies, Harlowe, or Hazatsu, the half-elf cleric/thief played by Ken & Aeryn Prow, the human thief, played by Alicia. Leaving the Node we met

skycornerless' new character, since Vigda died, a half-elf cleric/fighter from Kara-Tur named Karai. She's part of the same order as Hazatsu, so we take her in. The King of the Earth Titans, Volgo, has been mutated by the wild magic infused black dragon heart Curulókë & Aeryn sewed into him, but we brought him to the Prime Material Plane with us.

Curulókë is still poisoned, & despite the players & the dungeon master pouring through the text, we can't find a spell for getting rid of poison. There is a cure disease & a remove curse, even a slow poison, but curing it? Gilda makes a check on Curulókë but things are bad; just as I botched Curulókë's roll with the throne that poisoned him initially, now Lilly botches Gilda's roll. Not a good turn of events; that luck holds by the way, for a while; I keep rolling low for the rest of the game. Sometimes, when it is my thief skills, that low roll is great! I sneak like a ninja, I find traps like a sapper. When I attack, however, it is whiff, whiff, 1s & 2s. Which is what happens; the Volgo, the Mutant King of the Earth Titans, decides that he's parting ways with us & just starts punching his way out of the temple. Oh, okay! We'd talked about hiding in the wizard's secret passages so we run off in that direction. Only to be brought up short by a confrontation at the crossroads!

By Gramag, the assassin from Hommlet who killed the wizard Rufus, & was working with the town tanner-- & agent of the Temple of Elemental Evil-- Ramos Davil. Gramag is accompanied by a broken man, a brainwashed former paladin of Saint Cuthbert, Sir Joofer. Before the fray is joined, Gilda-- with her roc-eye-- sees the invisible cleric & Curulókë spots another skulking assassin in the side room. Hey, flanking enemies is my signature move! With that, the fight is on. Like I said, I miss with my attacks for most of the fight, though one of the slime babies makes the female assassin blind & then I put arrows into her face, dealing buckets of damage, killing her. I also managed to use my body as a shield to prevent Gramag from escaping while Gilda turned into a jaguar to fight him. Aeryn knocked out the Stockholm Syndromed paladin, hoping he can be saved, & Hazatsu is just a dangerous thug with his maul of the titans. & Karai's AC is a zero! I'm so jealous of that, but I think I'm going to get Gramag's elven chain & the other assassin's magical buckler, which will both be great. New mini time! 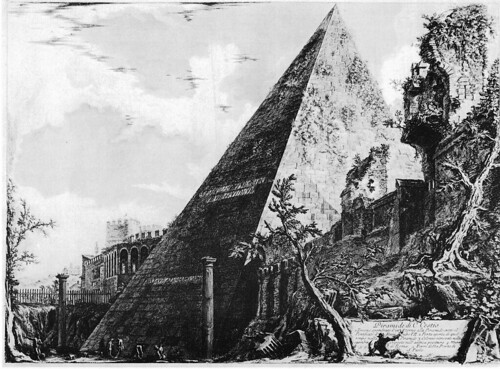 For no particular reason I was flipping through the Pathfinder GameMastery Guide today, & I decided to play with some of their random tables. Just see what sparks happened to fly. I didn't even get past the first chunk of it, though; I rolled up some urban locations, & then decided that what I rolled would inform the setting for the next Oubliette adventure. Well, what I rolled up was actually super campaign appropriate, which is fun, on account of how my campaign isn't your typical swords & sorcery setting. I know quasi-Japanese isn't so radical-- that is partly why I've adopted it this go through-- but things are a little more layered & more complex than they appear at first glance. The random tables still had plenty of room for interpretation, though, & they suit my game really way, by happenstance. Here is what I got, from the tables on page 211, the "Urban Toolbox."

Unique City Decorations:100 City Locations:So, with that as my starting point, I'll get cracking. First step is use a little very basic research to come up with a name. I'm generally in favor of super stupid names, because in reality places have dumb names. "New York," what is that even? So, banal & obvious, huh? So let's look at Japanese. My easy rule of thumb is to "translate" the language of the Shogunate to Japanese, the old Imperial as Chinese, & then the pre-cursor, Al-Kem, into Ancient Egyptian. Linguistic drift though stealing. Anyhow, Japanese for "pyramid" is "kakusui" so that is the first part-- a giant pyramid tomb from Al-Kem sticks out. The fountains & parks of the place lead me to drop the suffix "-en" for garden. So, Kakusui-en is the Pyramid Gardens. Easy enough. Now, I already have some designs on the next adventure, & I'll just say that this fits them pretty perfectly. I see three or four layers of occupation here.

First, the pyramid obviously dates back to Al-Kem. The Shogunate is 300 years old, dates to the fall of the Empire which stood for 900 years; there was a millenium of tribalism & city-states before that, which were the result of the decline of the Kem...which means the pyramid is probably around 3,000 years old. So, that is the earliest apparent element. The fountains are maybe the next oldest piece of the city; I'll say that their construction dates to the Empire. Using some persistant ancient technology from the pyramid that pumps water, the Empire made themselves a city of fountains & gardens. Those will be functional-- the 100 fountains & the arboretum-- but ruins. The more modern element will be the church & the water fountain that has been turned into a trough. A crossroads temple, with a place to water your retinue & horses; the landscaped park will be kept up by them. Given that Joko Izumi, the town from the last arc, was a town founded around hot springs, that means there is a "water" theme, huh? The newest element is the longhouse; a very recent occupation, put there by a warlord who is using it as his temporary headquarters, as the fountain & gardens are a good place for his troops to provision themselves.
Collapse