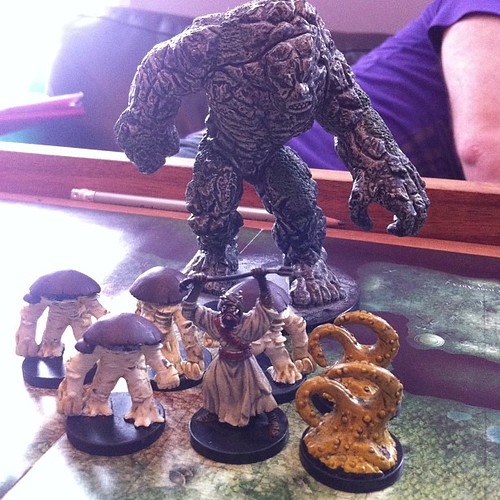 Well, from my admittedly narrow & biased perspective, I have to say the most important thing from last session of

fordmadoxfraud's Stories of Our Youth AD&D campaign was that my elf thief-archer, Curulókë, added a couple of Jelly Babies to his entourage. You remember when he got his Mushroom Babies, right? Well, when we found the weird carpet of ooze trap, Curuloke's idea was for his myconid friends to "touch rhizome to rhizome" with the slime & see if it can't be "saved" in some way. He's all about suborning Zuggtomoy's control over Neutral slimes & fungi; that isn't Evil! She doesn't get to just claim dominion over stuff unopposed. There was a risk to the mushroom person involved, but I think they've learned to take risks when appropriate, & so-- success! Slimefriends. They look sort of like the kodama from Princess Mononoke, but made of goop. If they ever make a Thieves Bible, I want to be the saint of slimes & toadstools. Thieves totally need a patron for that. Weirdly, remember how in in David's Orrery campaign I had a gelatinous cube familiar for Bogey Noodlewriggler, my goblin mage? I even called it my "jelly cube." Anyhow, yesterday's game was a small group, what we call the Thieves Three; Curulókë, Alicia's human thief, Aeryn, & Ken's half-elf cleric/thief, Harlowe. We mean business! That business, on Saturday, was a very Old School Rennisance meets the New Weird, as it turns out.

First, I should point out that I was wrong about the art objects. The dragon's horde had six art objects in it; a gem necklace, a jeweled goblet, a finely wrought snuff box, crystal dining settings, a statue of Iuz & scrimshaw of a black dragon. I thought that scrimshaw had to be whale, but I was mistaken! I also thought the word for a walrus tusk "scrimshaw" was a tupaliq. I was halfway wrong about all of that. Scrimshaw can be ivory or bones from anything, but is mostly nautical, & a tupaliq is actually a little revenge totem or puppet monster, which is often made of walrus tusk, but sometimes other stuff like narwal horn (!) or antler. Alright then, so noted. The other notable "treasure" was the sentient sword that Vigda was carrying. See, that sword caused quite a few problems along the way last night. Almost as much as the Throne we found. Curulókë has been carving his name as "blasphemous" graffiti on Zuggtomoy's Thrones & Zuggtomoy's Idols. It can't hurt to be blasphemous to the unholy, for one, but more importantly, he's now explicitly doing it to deny her claim over mushroom babies & jelly babies, & to assert his own. Even if when he's doing so he gets too clever & tries to cannibalize a trap for venom & then fails his roll & poisons himself really badly. & then there is a clock hanging over his head for the rest of the session.

Speaking of a countdown, we're all still deaf. No kidding. & when I got poisoned, I removed the option to just stop & rest till the ringing in our ears left...so we pressed on. We found the aforementioned ooze nodules-- half trap, half terrain feature-- & while I was messing around with granting them sentience, Harlowe used stone shape to make a path right through, over to a...face? Dilly had found a human face, detached skin, in the Spider Cave & somehow tossed it here...& oh my gosh, it landed on an Earth Titan! The Last Earth Titan, the King of the Earth Titans, to hear this giant clod of dirt tell it. It tells us it wants revenge on Kaanan Bel Cannon, Countess Telahi, Sir Joofer, Scorp the giant, Falrenth the wizard (who we've definitely killed) & Smigmaw the Red Hand. We deduce that the Earth Gem is its heart-- it tells us as much-- & my notion is to try to find something we can substitute in! (Actually, now that I think about it, the Mud Elemental Egg would probably have worked) Our ideas were two-fold; dead Vigda's magic sword, which seemed to have a "gem thing" going on or...oh wait! As soon as the magic sword hears us mention using it as the Titan's heart, it flips out! It makes Harlowe insane! He attacks Aeryn, doing a bunch of damage, jumps in a pool of slime, making himself blind as well as deaf, & then stabs himself really badly! It is...spooky!

Eventually, we take Harlowe back to the cave with the dead dragons, & I set the mushrooms & jellies to look after him. Then Aeryn & I cut out the heart of the black dragon, the one that is left. We bring it to the Titan & say we are going to operate & substitute in the dragon's heart for the crystal. Curulókë has been thinking about making flesh golems for a little while now, so the idea is ripe. We melt down a bunch of silver coins, silver arrowheads & a silver sword in order to use molten silver as a sort of "blood transfusion." Sounds good! In we go, Aeryn & Curulókë, & I think I'm going to have to take a proficiency in Healing now because we did it! Only to watch in abject confusion as the Titan...changed. There was still Wild Magic in the heart, from the rod of wonder, & the Earth Titan...grew tentacles, its humanoid body becoming a strange quadrupedal arrangement? & then it sprouted fleshy horns, a full brass band, playing what sounds like African dance music. & anyone hanging around it? Can levitate. Personally, I hope that the trumpets spew acid, in a callback to the black dragon. Um, okay, so we made a sort-of benevolent Lovecraftian deity, I guess?
Collapse