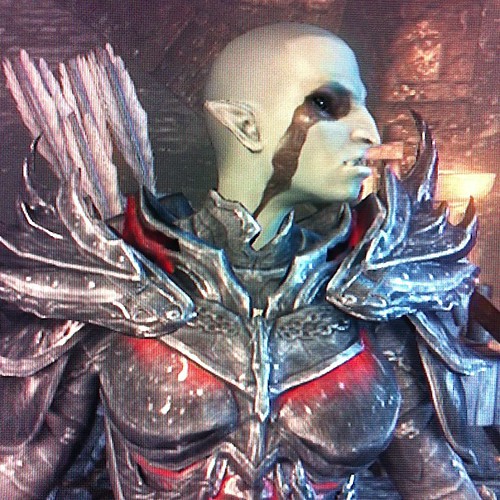 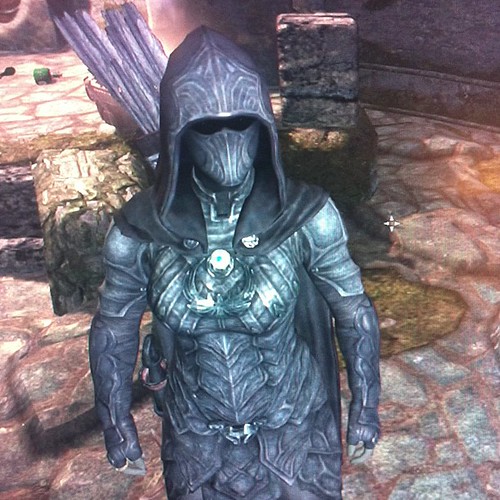 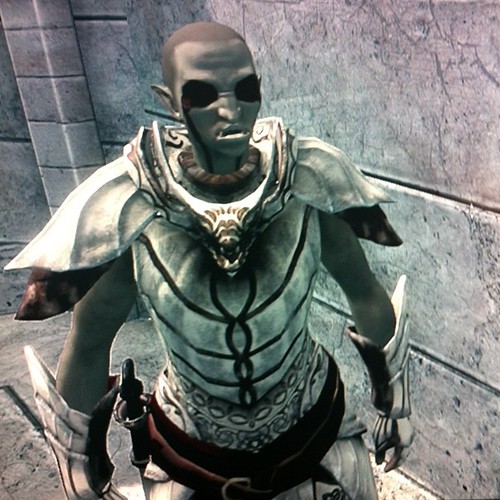 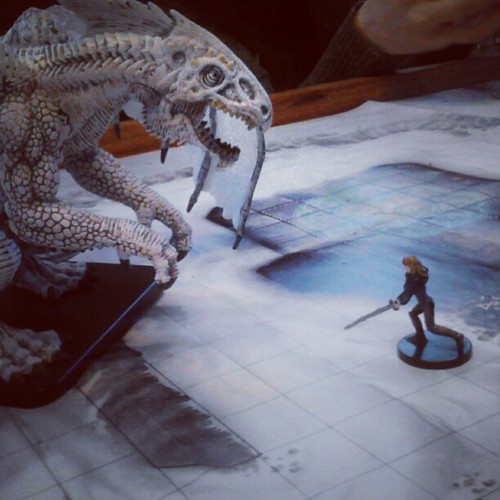 We haven't had a player character death in a while in

fordmadoxfraud's Stories of Our Youth game, but last night changed that! The last one was actually one of

skycornerless' characters, too; Nara the elf druid died fighting lizardfolk. Then the time before that was my character, when Encre the gnome wild mage died. Vigda the elf fighter/mage got a pretty fitting death, though, which is more than a lot of PCs get, I think. Let's rewind a bit; I'm going to hit the highlights. The party consisted of Curulókë, the elf thief-archer; Ken's half-elf cleric/thief Harlowe; Alicia's human thief, Aeryn, Rasheem's human bard, Raz & of course Vigda. Last session we had dealt with the Fire Node of the Temple of Elemental Evil; Curulókë had the Air Node jewel, Vigda had the Water Node gem, & the Fire Node gem was set into the Crown of Zuggtomoy, that Aeryn carried. We teleported back to the Prime Material Plane...only to be confronted by Darkstrider, bloody swords in hand! Darkstrider was Master of the Hunt back in Daggerfalls. I'd pickpocketed a medal from him, a medallion of ESP, & when I used it I had some weird side effects that, paired with Darkstrider freaking out in Daggerfalls, made me think there was a bit of a curse going on. I'd seen visions of him cutting his way toward me, so I knew there was a confrontation coming.

Except instead he...pledges himself to me as my...slave? Oh great, that is just great. Apparently he had a slave, the previous owner of the medal, who he stole it from. That guy had a slave, who was the guy who owned the medallion before him & so on & so forth & all of them are trying to find me to be my slaves. Ugh, so stupid, I don't want to deal with all you evil NPCs through coercion! I'm trying to set a good example for my mushroom babies, I'm a role model now. Sigh. Anyhow, I at least think of a way to get Darkstrider out of my hair for now; he says that the world above is "burning" from coast to coast, as the Temple has gone to war with the world, & is winning. Well, it just so happens that I have a copy of their battle plans! So I send Darkstrider to deliver the maps & documents to General Greatshout at Illefarn & King Melendryk of the Laughing Wood. Hopefully that will help earn some "Victory Points" in the war above; that was my hope for arming Hommlet & giving them the siege engines, too. Anyhow, we're in the guts of the Temple gutting off their access to the source of their elemental troops, so that counts for a lot; at least, that is what I'm counting on.

Mischief managed, for now, we find a hiding place & rest for the night! Finally. The two elves, Vigda & Curulókë, are up, since they both "trance" rather than sleep, & having bonded in the Fire Node, Curulókë does a Kara-Tur style tea service for Vigda, & plays Go with her, losing badly & stupidly each game. Practicing keeping sharp. In the morning, it seems someone has booby-trapped the Elemental Nodes; my guess is Ramos David &/or Gramag-- the assassins from Hommlet. Bleary-eyed Curulókë almost springs the trap, but with Aeryn's aid, Harlowe disables it. Into the Earth Node we go! Tumbling, immediately, rolling down a dark dirt ramp. Those with elven blood-- Curulókë, Vigda & Harlowe-- can see that they are in a flat pancake shaped room, only a few feet high, but Raz & Aeryn can't see till she pulls out her rock with continual light. There is a...giant claw sticking out of the dirt? Before we can really figure things out, Raz uses a rod of wonder (R.I.P. again, Encre!) on it...clapping himself in an iron cage! Curulókë picks the lock & Raz tries again...BONG! DONG! BONG! DONG! Bell, ringing bells, deafening everyone in the party for hours, except Aeryn. Curulókë can at least read lips but everyone else is screwed!

Vigda just decides, the hell with it, & casts flame strike on the claw. Oh, okay, it is on? It is on, because sure enough, the claw belongs to a giant black dragon, & her mate. They are guarding two eggs & after getting attacked, they are pretty unwilling to listen to Aeryn's trickery, even though that worked on the white dragon & the red dragon. (The picture above was taken by Emily, & is from the white dragon, but it has the right emotional connotation for her fate this game, so here it goes.) No, this time, it is a brawl, but at least there is enough confusion at the outset for Curulókë & the myconids to sneak out of the cramped chamber & into a wider cavern. The male dragon vomits a pool of acid around the eggs, to protect them. Vigda uses a rod of terror causing everyone to flee-- everyone! Dragons & fellow party members. Raz uses the rod of wonder again, attacking the eggs...& the acid turns to honey! Curulókë is the only one unaffected by the terror & he runs forward & scoops up both eggs, getting honey everywhere. Meanwhile, the mushroom children are gathering new spores-- glowing spores & earth node spores-- & elemental loam, like the elemental water we'd found. Between Curulókë's arrows & Harlowe's maul of the titans, the female dragon goes down. Curulókë's caught in the acid blast when the male dragon shake off his fear, & then when Vigda uses the rod of terror again, he is forced to flee, as well. With the party driven away by the fear effect, Vigda is left to face the dragon alone. He kills her, even as Raz Jericho cuts out the heart of the female dragon, eats it...& sprouts a pair of scaly black wings...
Collapse