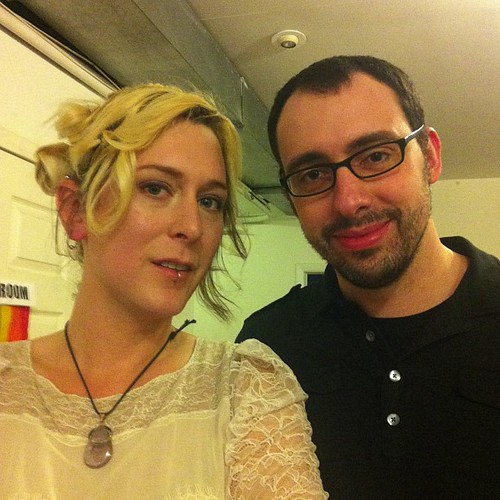 Oh, sorry, I've been bad at talking about being alive. I've been fine at doing it, but not at like, a meta-awareness of it; that would have been asking too much. So here is what my situation is. Jennifer has been out of town all week, which is a big bummer, since I need affection to relieve stress, but more to the point a bigger bummer for her because her grandmother died. I don't really know how to relate to that, except cerebrally, so I've tried to be available for her but I doubt I've been any help. This comes right in the middle of her being all anxious over her job search, which I do get, because yes, that absolutely is the worst. Always performing, always being rejected. It is over now, though, because between hymns or viewings or whatever funeral stuff, Jenny got a new job. So that is positive news! While she's been gone, though I've been bouncing between super introverted & super extroverted. Everyone is at a conference at work-- before, I would have gone to the conference, because I was small potatoes enough to go & go grunt work, but now I'm medium potatoes enough to fall between the cracks-- so it has been me bugging Brian & Kara at work, & otherwise a ghost town. Um, no, of course now that I say all that I realize that it isn't exactly true. I went out to a diner for lunch with Bridget one time, & I got a lamb cart with Mollie & then we went inside a giant camera obscura.

In fact, here is where we get into the extrovert part of it! Tuesday I went to

iphisol's book launch party for Nevada! Which hold on, first off, I'm halfway through & it is really great, you should get it for sure. I mean, I knew it would be great because I've been reading her writing on blogs for years, but when she actually started doing the reading at the book release party I was like "yeah, this is pretty intense." Sherene & I got macaroni & cheese & wine before going, headed over, & met up with

ranai there. There was also whiskey there. I got a little drunk, Sherene got a little tattoo. She had talked about wanting one at book club & the set-up was all professional, so she went for it! Then we went back to her apartment & stayed up too late smoking hookah. The fallout from making friends at this party was that someone asked me on a date over text, & I was the biggest square in the world about saying no, 'cause I was married. I just was clumsy! In person I can be self-deprecating or whatever, I don't know! I use being married as a shield because I flirt a lot; normally that works out fine but I am pretty artless at turning people down in text form, it turns out.

Then the very next night was Television Night!

fatbutts was here first, & she's been pretty jealous of all my pretty Skyrim pictures, so she made a dark elf character while we waited for the others to show up. Then David & James rolled in & why got the show on the road! Firefly! We knocked back a couple of good episodes-- the train robbery one & the abandoned ship one. I'd just seen the latter at the gym but David's Firefly lore was totally better than mine. Then Thursday! Terra flew in from China! So that is good news for the rest of the month, right? She took a cab here & we did nothing. That is totally our friendship mojo, not having to be "on" all the time. She is pregnant & jet lagged, so my solution was Justice League Unlimited cartoon episodes. I thought I was going to go to the gym in the morning-- figuring she'd be out-- but she was awake from intercontinental shellshock, so more JLU. Lunch with Mollie & JJ & Vicki at Hill Country Chicken; I used a gift certificate that

onatopofthings gave me for my birthday! & then Friday night, nothing. Just the gym, then Skyrim. Waiting for some inspector to come check our pipes or something, this morning, then David's game then Jenny comes home!
Collapse