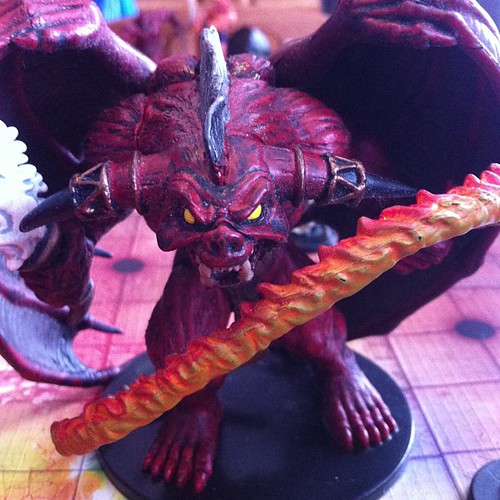 Alright! I spent all morning writing up my game, then hanging out with Jennifer & Olivia. After that, though, it was time to saddle up & giddy up! Over to

fordmadoxfraud's apartment for his Stories of Our Youth AD&D campaign! Alicia, Ken &

skycornerless were there already, playing a shorter make-up session with their characters Aeryn the human thief, Harlowe the half-elf cleric/thief & Vigda, the elf fighter/mage. They finished up their adventure in the Air Node of the Temple of Elemental Evil right as I arrived, & so I used the Air Crystal to blip! them into the Fire Node-- unfortunately, Raz Jericho was sucked out by the backwash, lost between worlds. They joined Emma's halfling psion Dilly & my elf thief, Curulókë but really, the star of the session was

Last session ended with Curulókë just...well, killing everyone, in the middle of everyone else scheming. We were talking to an adventurer, Tacky-- good or evil, it wasn't clear-- trapped in the Fire Node, when efreets attacked. The party tried to negotiate with them, which led to the fire genies saying that they had to "punish" Tacky. Grizelda was angling for a wish, Dilly was sitting on an efreet's shoulder, Raz was confused...& the efreets were attacking Tacky. So Curulókë shot them in the eyes with arrows. At which point Tacky understandably turned on the others...so Curulókë shot him in the face with arrows. Listen, I'm not eager to kill everyone-- but I'm willing to. We'd just looted the bodies-- only a bandolier of blood & tears-- when the others showed up, along with Grizelda's creepy new side-kick, the nearly-nude & deposed priest of the Temple, Sargen.

We caught up-- Harlowe has a belt of giant strength & a maul of the titans now, & Vigda has an intelligent sword, having killed the Air Node giants-- & we were off to the brass obelisk to see a red dragon about a Fire Gem. Harlowe imparted to us the wisdom that a giant had passed along to him; the putting all four gems into the evil crown would turn it into a sphere, & crushing the sphere with the enormous mattock would be a massive blow to Zuggtomoy's power. Good to know! We talked among ourselves-- Good & Evil, Law & Chaos; Curulókë still thinks that the Lawful Good & Chaotic Good party members are dangerous-- & then...Grizelda drank some efreet blood? Causing the roc eye she'd replaced her own eye with to become Sauron-like, ringed with fire, & her alignment to become Neutral Evil. Oh, so it is going to be one of those days, is it? 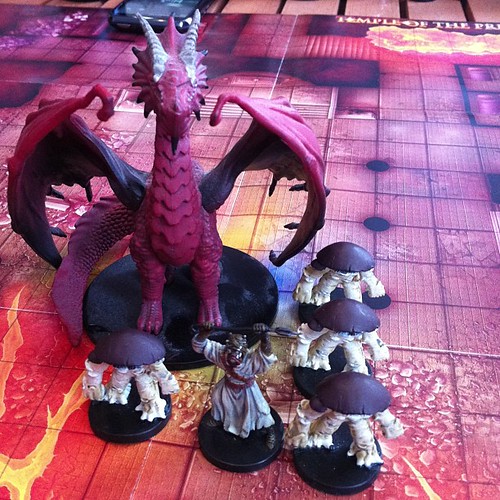 Curulókë sneaks around to flank the dragon at the brass ruins, & the others approach. Dilly, first, makes contact with its mind: FIRE. GOLD. DEATH. Yeah, that's a red dragon alright. Aeryn goes up to sweet talk it; the corrupting power of the crown is clearly taking a toll on her, but it still makes her irresistible to creatures of Chaotic Evil, & so she tricks the dragon into flying away to loot a caravan. Well, that wasn't so bad! There are idols of Iuz & Zuggtomoy here; Curulókë carves his name into it, as he did to Zuggtomoy's thrones. "Desecrate all profane idols!" was the original intent, but now that he's looking after the Mushroom Children there is an element of stealing Zuggtomoy's dominion over fungi, of uncoupling "mushrooms" from "evil" in her portfolio. The greatest heist in history...stealing from the very essence of a demon princess. Harlowe smashes the statues, later, but I ask him to leave the feet, to leave my blasphemy.

There is a crystal vortex in the room, & touching it releases...A BALROG! Well I think they are technically Balors now, but as a wise elf once wailed: "Ai, ai! A balrog, a balrog has come!" it is all beaten up, & not at full strength, so...people want to...try to talk to it? Oh, well...oh. I guess these are the people Curulókë adventures with. Note: Curulókë's plan is to shoot arrows into this thing until it stops moving, but also stay hidden so it never notices him. This is a good plan, I think. Aeryn finds out that it is the Fire Node crystal! Things are looking topsy turvy so...yeah, I fire off a few arrows. Hey! David decides to give me the "Archer" kit! +1 to attack & damage with bows, -1 to attack & damage with everything else. so make that Curulókë, elf thief-archer, in the style of "thief-acrobat." Anyhow, Aeryn presses the evil Zuggtomoy crown to the Balor & it implodes, crumples, crams into the crown. Alright; platinum & silver pieces-- looted from a chest-- for all!

Which you know, is when things really go side-ways. There is a font of water-- I think elemental water, purified elemental water, but it could be something else-- & we drank from it without ill effect, & I watered the myconids with it just to make sure they are hydrated. When Grizelda drank, she freaked out; the statue of Zuggtomoy starts screaming & Grizelda's face breaks out in whitecaps, mushrooms like pimples. Her response is to dump blood on her face. That was when Harlowe busted up the idols. Now, though, with the Balor gone, we find her cradling the Zuggtomoy idol's face, being all demon cultist as heck. Oh no. Vigda is swords out at her & frankly at this point, Curulókë is too; he draws down. My actual plan was to shoot the marble face of the idol, but you know, I'm content to let my reputation as a stone-cold killer remain. Harlowe casts remove curse &...it doesn't work. Eventually, though, Vigda & Curulókë drag her to the water font & "baptize" her in it. The water roils, filthy, suddenly stagnant, bubbling, hissing, but...it washes Gilda clean! She's no longer vampire toothed, but still salt & pepper haired. Now her eye is deep blue; she's been touched by Air with the roc eye, Fire with the efreet blood, & now Water from the font...& the Earth Node is next! 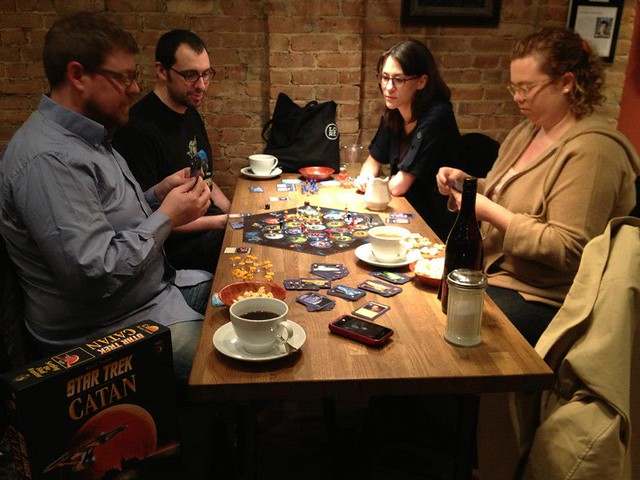 Well, International Tabletop Day, I think I did you proud. Deconstructed my last game session in the morning, then played AD&D in the afternoon...& then I came home to pick up Jennifer to go on a game-night date! Another of those free How About We dates; I think Jennifer really found a cool service. We went to The Brooklyn Strategist & got coffee, cookies, popcorn & enough boardgames to shake a stick at. Also, it is BYOB, so we split a bottle of wine that we'd brought, to boot. How About We For Couples isn't a double date service, I've gotten asked that, but we did end up partnering up with Sean & Lauren so we had a foursome for gaming. We played Tsuro first, because I'd seen it on TableTop & it looked fun & fast. Lauren won, & I came in second, establishing a pattern that held for the whole night. We played the Star Trek Settlers of Catan, which I guess Wil Wheaton & Felicia Day were live streaming simultaneously. Hey, we're part of the broader geek context! Sean won that...& I came in second. Last we played Snake Oil, which is kind of like what would happen if Apples to Apples & Balderdash had a baby. Plus, there is a recombinant element that means it has a lot of replay value; it is both fun & well designed. I...I came in second, & Lauren won. We hung out with the staff afterward, looked at some old Chainmail miniatures, & then we headed out to meet up with

fordmadoxfraud & Libby for a drink. Not a bad nerd date! (Top picture by The Brooklyn Strategist.) 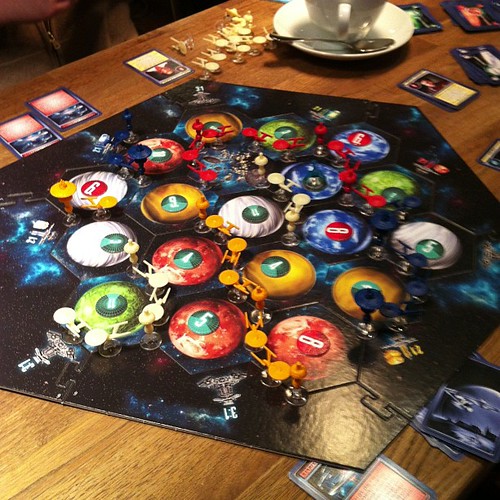 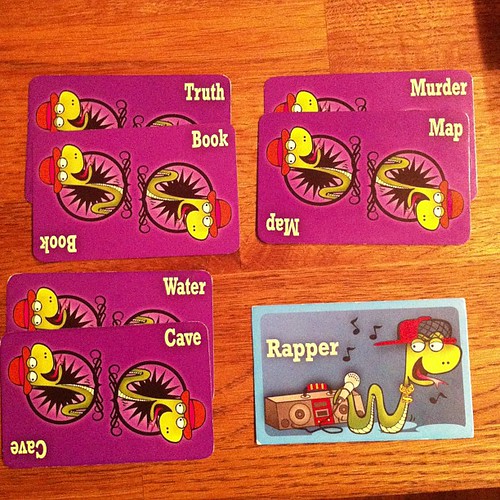 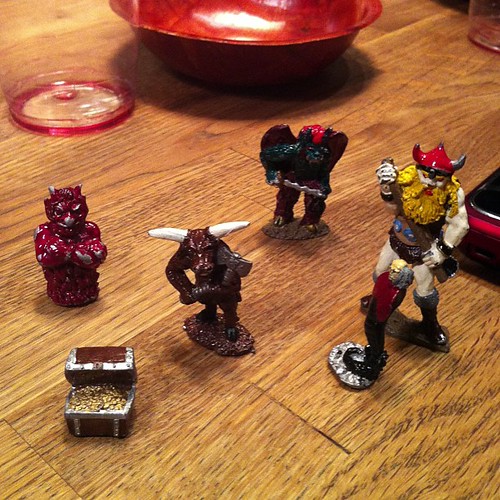