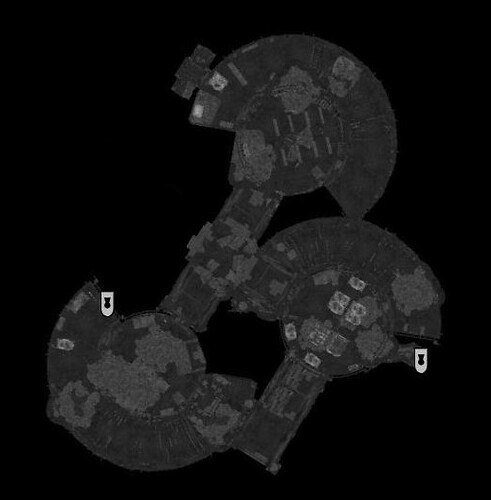 This concludes the first story arc of my Oubliette campaign! I was shooting for it to take about three episodes, but between not knowing how long a "after work" session would be & not knowing the quirks of my new group of players, I think I did pretty well with the timing! When next we meet, everyone will take their teenage character & make an adult version. They actually started out making adult versions, & then I told them to imagine the childhood versions; now that they've played the teenage versions, & played with the actual mechanics of the game, I'm going to give them another draft. Thesis, antithesis, synthesis. The first session was a trick I learned from

kingtycoon, bringing the player characters together in a situation outside of the usual context to bond across class lines-- spring break! Session two was loosely based on my adolescence at Squire's Castle: don't teenagers just want to sneak into abandoned castles, get drunk & make out? Then last session was sort of an Oubliette standard; the dungeon as weird fantasy set piece.

This session was another Oubliette classic; creeping psychological horror. When we'd last left our intrepid kids, Eric's Geiko student, Ren, had just discovered some antique treasures: a Tsuba & a Netsuke. He'd been led to it by the snake-with-a-face that wriggled out of Haru, the Kuge aristocrat, Luke's character. He'd sung the "Kagome, Kagome" song ("Kagome kagome, the bird in the cage, when, oh when will it come out, in the night of dawn, the snake & the monkey slipped, who is it in front of behind!") with Silissa's bumpkin herbalist-- we decided "bumpkin" summed it up nicely-- Moe sang with him. Mollie's novice Sohei Mio sang too; she's been developing protective feelings for Haru & her pet wolf Tokka has been sticking close to them, & Ren too. Keku, Nicole's cyborg girl, stands at a distance, with her pet snake wrapped around her arm. The group passes the objects around, examining them. Haru, exhausted from vomiting up the serpent-thing, drinks some of the mineralized spring water dripping down the wall, & the group resolves to go onward, into the next chamber, the one adjacent, not down a hall, where they'd felt wind coming from.

The Curse Ouroboros! I had everyone roll the Humanity to judge how the effects would hit them; Haru & Mio were affected the least, with Ren in the middle & Moe & Keku rolling no successes. Well, it is Keku's lucky day; Nicole & I had been talking about her backstory; she had drunk poison in her backstory, necessitating her cybernetic throat, & in subsequent discussions she decided that she's actually drank the poison willingly, as part of an extremist snake-handling cult of the snake goddess, Nagini. Well then! That puts her squarely aligned with the nagas, then, & so safe from the curse. The Curse Ouroboros! Quite simply, the idea of the curse is thus: the literal ouroboros. Not a metaphor for a time-loop or eternity, but literally eating yourself. In Mio, it manifests as wanting to eat her shoes, first. She's licking them, chewing on the leather. For Haru, it is just a hatred of shoes, for everyone. He takes his off, & is subtly encouraging everyone else to do so. Ren is hit a little bit harder; he has a scrape on his finger, a hangnail that has torn as they've been clamboring around the cobblestones & masonry, & his blood tastes...delicious.

Moe ends up cutting off her pinkie toe. I count it a victory for Oubliette & Silissa! A little body horror really sets the tone. I've been passing her notes, about the alien feeling of having too many toes, about how it feels like a scab over a pink, healed wound; a scab that needs peeling. Like a scab, cutting her toe off will hurt, but the pain will be almost a pleasure, will be satisfying in a fundamental way. & so, as the group goes into the next room, Moe darts into an alcove &...slice! & then, for extra oomph, she can't deny the succulent little morsel she has in her hand, & so, pop! She gobbles it up, the raw flesh chewy & wonderful in her mouth, bones crunching. She is hiding in the sub-chamber as Ren enters the room, with Keku behind him, & Haru & Mio still in the hallway, fussing with their footwear. Ren & Haru have the torches, shedding fifteen feet of light & then another fifteen feet of flickering shadows beyond that. The space is big enough that those two circles of illumination don't overlap. 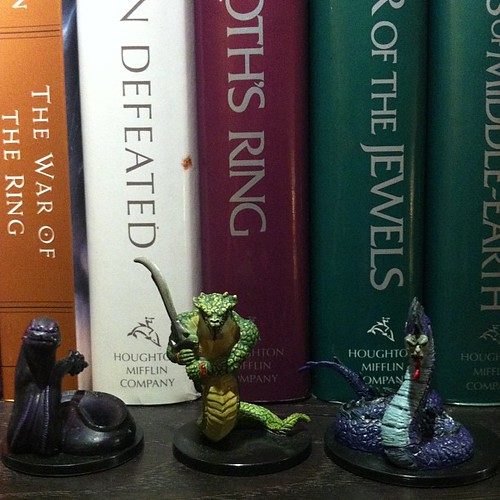 The others in the room start seeing...something...huge. Moving in the room. When there is a gust of wind, they hear a rattle, not a tik-a-tik-a-tik like a rattlesnake but a thoom-a-thoom-a-thoom, a bigger, lower register. There is a feeling of primal terror, of prey-animal, gut wrenching fear. You know the feeling of being in the water, & feeling the water deeper than your legs seethe, move, change temperatures, as though something vast swam below you? & the small fish part of your medulla oblongata freaks out, thinking "shark in the water!" Well, in the dark, they feel that. Ren feels something lick him, fast like a snake-- of course-- but large, like a...well, like a wet, giant camel, or something. Mio & Keku see a gigantic loop of a sinuous body slither behind Ren, with scales the size of bricks. Haru throws his torch into the room, end over end-- & it collides into something with a jangle! It looks as though a Monk's Staff is propped up in the middle of the room. & something is...coiling up around it.

The naga-spirit-- or whatever it is, is it a ghost of a dead adventurer, cursed by the naga? Does that make it a naga?-- has the face of a beautiful woman, but emotionless, cold-eyed. The face is so much bigger than a human face, twice the size, but has the same proportions. Ren goes up to it, & it bears its fangs. Mio throws her shoe, missing, & Ren goes in &...kisses it?! Players can sure surprise a Narrator, & that is one of the unique joys of the game. Snake spirit totemic of fear? Suddenly, make outs! Ren is kissing the humungous face, something growing in his thoughts, worming the monk's staff out of the rocks it is wedged in, the snake-thing piling up on him. The others are confused; what should the be doing, should they tug Ren free, should be be using this as a distraction to escape to the door at the other end of the room? Keku actually breaks the kiss-- only to go in for one of her own! What is going on! Locking eyes with the thing, she hears the name "Natsumi" in her head & sees her in the room, cutting off her entire foot, tourniquet around the knee, ready to eat it.

Things are clicking more-- another group of people, of "adventurers," tomb robbers-- broke into the castle, years ago, & looted these objects. The staff, the tsuba, the netsuke, all grave goods, stolen, & repaid with a curse, the Ouroboros Curse. The others never made it out alive; they devoured themselves, piece by piece. In fact, oh my gracious me, Moe just cut off her other pinkie toe! They see her do it, this time, & as they notice she pops the toe into her mouth before they can stop her, eating it with a guilty look. Keku, unrelenting, calls the naga-thing "Natsumi" & its face breaks, starts sobbing, crying tears of blood, body clutching & heaving with sounds of sorrow. Haru convinces the others she wants to eat her tail, so they feed it to her. She swallows is, broken with sadness, shrinking smaller & smaller, till a tiny little snake is left squirming on the ground, choking on itself. Haru admits that he knew she didn't want to eat her tail, but just wanted to see what would happen. He's pretty sad too; they're all pretty sad, & they pick the lock on the other door glumly, but so successfully-- using the lockpick they found in the castle, a lockpick left behind carelessly by the adventure seekers-- that is raises their mood a little.

The corridor beyond is zig-zag black & white tiles, Lynchian, with heavy black curtains, velvet drapes covering the walls, the ceiling. They follow the hallway about thirty feet, where it comes to a yellow curtain...& then another corridor of gold lamé covering the walls & ceiling. Another black curtain to pass, & another thirty foot hallway...but then! A forked path; red curtains & then next to it, yellow curtains. This tickles something in the back of their memory-- a mnemonic about venomous drapes-- but they can't quite remember it. The group chooses to walk into the yellow curtain, but Haru elects to stay behind with a torch. I send Luke into the other room, & the group goes on. They've chosen...poorly! A poison seems into them, sickening them, harming-- someone, I think Mio?-- but not killing them, not yet. Ren, behind everyone, feels the sort of migrane he developed when kissing the snake-woman "pop" almost orgasmically, & a giant Black Pearl tumbles into his mouth. You know how you can feel that a pearl is real by rubbing it on your teeth? That feeling dominates. At the end of the hallway, another choice: black or red curtains. They choose black, & I call Luke back in, telling him that he hears someone enter the corridor behind him. He freaks, setting the curtains around him ablaze! Before realizing it is the others, who have looped around somehow! They run from the fire! Into the red, then-- out!

The hallway is rough hewn; an escape corridor from the panic room construction of the under-castle? They follow it-- carefully, carefully-- & resolve to just bum rush whatever they find. Which turns out to be...a large cavern, a chamber lit by candelabras, with a huge multi-headed naga statue in it? Wakana-- the Geiko girl they've been looking for, to rescue-- kneels in front of a folding rice paper screen painted with snakes whose scales are the colour of koi. Behind it there is a serpentine shadow, a silhouette with a legless lower half but four arms. It smokes a water-pipe & when the silhouette smiles, there are green jade teeth, as clear as anything, as though embedded in the shadow. It preens at them, "hello brave children," & it calls Keku "sister," happy that they've brought her things back. The Naga, properly, the Hebi-no-Hime, the Snake Princess. They banter, they bargain, they flatter, they cajole. The curse is off them now, & she offers blessings for those who will take them, & for the rest, gifts. Strings are, of course, attached, but then, they aren't invisible, at least. Haru keeps the Naga's Tsuba, & his wakizashi will hide, & find him if they are separated. For her "sister" Keku, who already has Nagini's blessing, she makes her pet snake a Familiar spirit, awakening it. Moe, the herbalist, she offers the gift of Poison, turning her blood to venom. Mio will accept no gift but demands Wakana's release; Wakana clings to her & the Naga relents easily, though she wanted to keep the girl as her handmaid. Ren she saves for last; he wants to keep the Pearl but she offers him a Kiss, which he accepts, his tongue forking as he gains sensual knowledge. Leaving, the find rescue workers digging at the stones, saying they have been missing for a week... 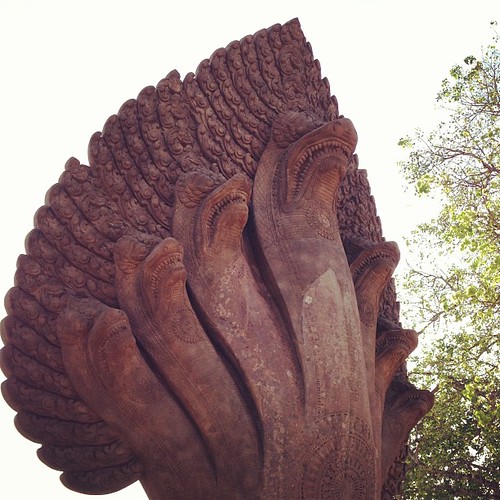