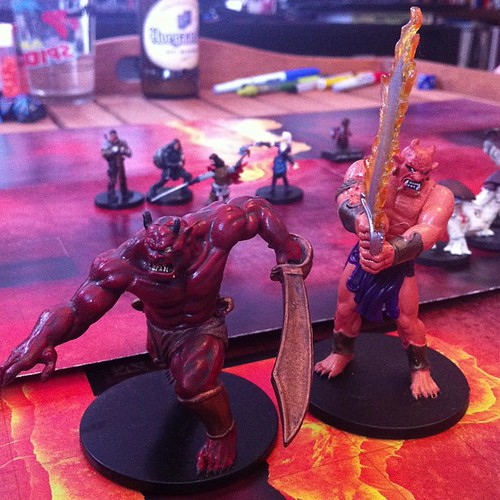 fordmadoxfraud's Stories of Our Youth was attended by yours truly, playing Curulókë the elf thief,

fatbutts playing Grizelda the half-elf druid, Raz Jericho the human bard, played by Rasheem, & Emma's halfling psion, Dilly. A pretty chaotic group; when Curulókë is the stable one, things are going to get messy. Here is the group. We've been dealing with the Nodes of the Temple of Elemental Evil, the demiplanes being used to produce the various elemental underlings. The Air Node-- more like the Dust Node-- took two sessions, but we dominated the Water Node-- more like Ice Node-- in just one. Next up, I guess? The Fire Node! More like Magma Node. I don't know the quasi- or para- elemental planes, but I think these map onto those; that is my metagame theory anyway. First there were some plot shenanigans-- the characters who were here last session but whose players couldn't make it this time had to be swept under the rug-- so half the group decided to...go back to the Air Node. Have fun storming the castle!

First up, creepy bearded guy in the raiment of a paladin of Saint Cuthbert. So when a guy like that shows up, all like a white bearded Gandalf, you have to wonder: high level NPC or avatar of the god? & at what point is there even a difference? Anyhow, he directs us toward the Fire Node, saying that the red ruby that Dilly found in the spider cave had attuned her frequency to the Fire Node. Alright then! Grizelda asks if he can help her with her Zuggtomoy Curse-- no dice. I ask if he can help protect my adopted myconid tribe from falling under Zuggtomoy's sway, so he puts a permanant bless on them. Then off we go to the Fire Node, blip! Flames, lava, hellish landscape, about what you'd expect. The rebreathers from the Air Node help, but my armor hinders; I'm tough enough to bear it, but Raz is all messed up until Grizelda & Dilly give him spells & magic waters. Oh yeah, because Raz & Dilly pop out of a dimension door that malfunctioned a few sessions ago (& was the MacGuffin to get them out of sessions that they couldn't make it to).

Raz showing up means it is time for "oh my gosh the DM won't give us the identify spell so maybe the bard can figure it out?" where we all rush Raz & have him roll his (now) 35% chance to identify an item. Notably, he is able to deduce that the Roc Eye, Freely Given, works like the Eye of Vecna in that you have to have an open eye socket for it. Gouge out your own eye, in other words, pending previous trauma. Grizelda wants to, but doesn't have the stones. It is hard to cut your eye out! Curulókë is wary of Grizelda-- she seems like Gilda just vampired out & she's way too far under the sway of Zuggtomoy-- but this seems fine to him. This kind of DnD crazy is Curulókë's bread & butter; it is the Evil crazy he is leery of. Dilly uses her psychic powers to make Grizelda feel like cutting out her eye is the same as cutting her hair &...slice! Pop! One brand-new gold rimmed eye that can see in the dark, see invisible, see like a telescope & grants +1 to Wisdom & +1 to Charisma. See invisible? Hey, I have an invisible page from way back! Grizelda reads it & it is a manual of flesh golem construction! We have a fight slash bonding moment slash Curulókë is cold blooded & prioritizes his mushroom babies. He is teaching them to be sneaky & to be True Neutral. Important life lessons.

From where we are-- a roofless stone structure of some kind-- we can see a brass obelisk guarded by a red dragon to the "north" & a capering madman to the "west." Dilly reads his mind: the madman is "Sargen," & he is dancing to keep the "devils" away. His friend is "Tacky," & Tacky drinks his blood sometimes. Curulókë, sole survivor of a failed assault of Castle Ravenloft, is put into a murderous mood, with that. We head that way & low & behold, Tacky is there with Sargen, a giant of a man with what essentially amounts to a buster sword. We find out that he drinks blood like a Dark Sun character, as it is a rare fluid in the burning Fire Node. Well that isn't so bad! Sargen is a broken priest of the Temple of Elemental Evil, who knew Ashram from the Air Temple; Tacky is an adventurer who came on what he thought was a suicide mission to the Node, only to be trapped here. Alright, so far Tacky checks out okay. Grizelda-- who has a habit of grabbing people's faces & staring into their eyes-- is kything with Sargen or whatever, & that doesn't check out; he is responding to Zuggtomoy's Curse on her, & she is encouraging it.

Since Sargen has stopped dancing though...well, the devils are coming! Or more specifically, the efreets! Spirits of smokeless fire, wicked emirs & beys of the City of Brass, trapped here in the Fire Node by, you guessed it, the even-more-evil magics of the Temple of Elemental Evil. Oh, Curulókë is hiding, & shooing his toadstool toddlers to hide as well, but Dilly is psychically communicating with one, while Raz & Grizelda try to reason with the efreets...who are busy trying to murder Tacky. See, Tacky drinks efreet tears, extracted under duress, & Raz drank some too. They want them to "punish" Tacky. Raz, dear sweet innocent Raz Jericho, is like "you mean, like throw his sword in some lava?" Grizelda gets it but wants to barter; "we need him to find the crystal," but also "will you grant me a wish?" while Tacky battles the spirits. Curulókë has had enough; while Sargen turns invisible & flies away, Curulókë puts a couple of arrows into one of the fire-devils. The efreet tell Grizelda they'll give her a wish if she "punishes" Tacky, & well-- she gives into the temptation of power & tries to stab Tacky with her ceremonial elf dagger. The efreet says "your next words" but more arrows from Curulókë kill both of the spirits. Tacky turns on the party-- I mean, they tried to stab him-- so Curulókë puts him down too. Die die die! Grizelda-- who can see invisible-- looks at Sargen, who is startled that she can see him. She says "come to me..." & blip! There he appears. See, the efreet might be dead but the wish remained. A classic DnD experience! Getting screwed over by your wish is right on, that is legitimately a touchstone of the game.

littlewashu's pick for Eleven-Books Club was Journey to the Center of the Earth. After

fordmadoxfraud's AD&D game ran late, we had to hustle. David,

fatbutts & I jumped on the train & popped over to

carmyarmyofme's apartment. Jennifer & Beatrice were already there, & Tony was around & about taking care of Hazel, who I found out is named after Hazel-rah from Watership Down, which is a hell of a pedigree. Kerry couldn't make it, so we piped her in via Google Plus, & as usual Terra lives in China, so she had to telecommute, too. Google Plus wasn't working for her but we had spotty success with FaceTime. Why isn't my free intercontinental video conferencing better, future!? All in all, the reaction to Journey to the Center of the Earth was pretty tepid; either tepid dislike (on mostly everyone's behalf) or tepid enjoyment (for Jennifer & Beatrice). What did David say? That it's identifying quality was "banal," or something insightful like that. My thesis remains unchanged: Twenty Thousand Leagues Under the Sea is a good book & this is like that, only without characters, scenes, or even a plot really. Then we discussed some "club business," including who is going to pick the next few books. On deck I think we have Evelyn Waugh's Handful of Dust, Beatrice's pick, then Lilly will pick one, then hopefully Jenny E. will pick. Hrm. The meeting was also bouyed up by camaraderie; Lilly is new so we talked about official rules (the only really official rule is "you can't have read the book first," designed to keep me from making everyone read Gene Wolfe all the time) & the unofficial rules, like "don't pick a hardcover," "don't pick a long book unless it is like, YA." James picked us up afterward & drove me & Jenny all the way home before I realized I'd forgotten my bag at Carmen & Tony's, but then he just drove me back & Tony ran it down! Crisis averted.
Collapse