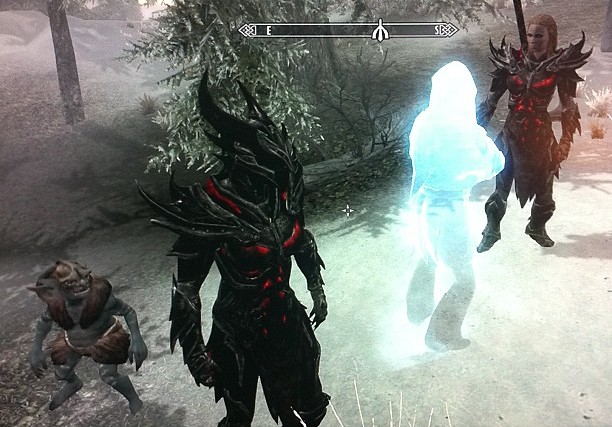 So that is my posse; Mauga, her wife Mjoll the Lioness, a "pet" Riekling warrior, & a spectral assassin bound to my will. Not pictured is my horse Shadowmere, who goes berserk all the time & tries to kill everything, even if I'm in the middle of trying to pick their pockets. Mjoll is kitted out in Daedric Armor, as you can see, which I made for her as a wedding present; the goblin is similarly equipped with Daedric arrows, which he uses as spears. I rounded up my hard crew to run roughshod over the Ebony Warrior. See, in the last downloadable content they added a "super tough" challenge; if you are level 80 or 81 (it doesn't go higher than 81) the Ebony Warrior will show up in White Run to challenge you to a duel, if you find him high in the mountains. Heck yeah I will! He's all "I've done all the quests, killed all the monsters," & I'm like "I know that feel, bro." Anyhow, he's supposed to be an epic challenge, with even badass players having to fight him a couple of times before winning but...I didn't experience that. I picked his pocket first, until his noticed me, then I equipped my Dragonbone Mace, put the healing spell that heals me & those around me at the ready, poured some paralysis poison that I'd alchemically prepared on my weapon, used the Dragon Aspect shout-- feel my Thu'um dude-- & used Orc Rage. I hit him...maybe three or four times? The whole fight was over in ten seconds tops. I think I broke Skyrim. I mean, to get to level 80 you kind of have to have, though. I guess I was hoping for more of a challenge, but I'm perfectly happy having bragging rights, too.

We are sort of caught up with television. I know all I do is talk about media & role-playing games, but then...so what? That is what I like, & if I've had one rule on this dang diary for the last...thirteen years? It is that I'm going to do whatever I want, na-na na boo-boo. Yeah, my wife is unemployed but she's unemployed like a boss, so deal with it. Sorry there isn't an awesome sob story post about that, but my life is pretty great actually; having to go on a budget isn't even a problem because now that means I have an excuse to eat shawarma every day. A lot of white sauce, a little bit of hot sauce! So anyhow, uh. Bunheads. I was pretty ambivalent before-- it was so much like Gilmore Girls that I was mad it wasn't Gilmore Girls-- but then the show started focusing on the girls & it found its footing. Plus, Michelle is basically the anti-Lorelai, I realized; Lorelai got pregnant when she was a teenager & then never stopped throwing punches, but Michelle is like, all sad about life still. Not too sad, & she's doing something about it, but she's not like Lorelai at all, patter & quips aside. Anyhow, if Bunheads can use this "teenage sex" plotline to be like "oh we had sex & maybe there are emotional consequences & maybe one of us likes it & one of us was like, was that it, but there is no cheap soap opera pregnancy scare or STD morality play or anything like that" then it will be a Good Thing™. Uh, what else. Gravity Falls; I like it but I don't get all the hooplah. I mean, it is a fine, fun show, but it isn't melting my face off or anything. Um, um, um. Oh! Elementary. It doesn't take itself as seriously as Sherlock, & that is a good thing. Plus, it actually addresses issues of gender, which is nice in light of the fact that they went with a Joan Watson. I'm hoping for a Mychelle Holmes as his sister. & then The Joe Schmo Show. I like Joe Schmo. The whole idea of an inverted reality show, as a massive prank. Fun. The "deaf girl" thing is offensive, though, & undercuts the good natured spirit of the joke. Tonight though, instead of Television Night, I'm going to go see The Protomen! But first, the dentist. Sigh. I hate needles.
Collapse