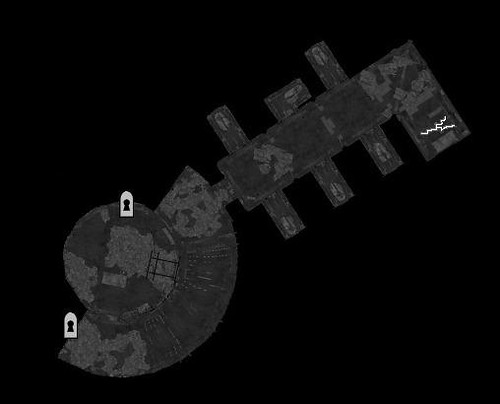 I learned a lot about running my new homebrew World of Darkness system running my new Oubliette campaign the other day. Like, for instance, I learned that if I draw a map too big, it will make the fight drag out too long & give players "bummer" turns. A turn spent double moving that doesn't get you to your destination? Is probably a good indicator of that. At play here is the fact that all the characters are young teenagers, with hamstrung stat blocks (4/3/2 instead of 5/4/3) & a bias from my last group of players, whose characters all had really high move rates. The fight at the front end of the session ate up more time then I'd meant it to, but I think that is a feature of the same problems; the characters are all children, with less points in their statistics & skills, & less plausible reason to be armed. Again, after the last campaign where everyone was basically a special forces wizardninja, shooting lightning, whipping out vibroblades & riding a deathtiger...yeah, I've gotten used to player characters who just disintegrate whatever I threw against them. The threat level wasn't too badly off-- maybe a little tougher than I'd intended, but within reasonable tolerance that is a good problem to have-- but it just ate up the clock. The one lesson I'm most paranoid about my players taking away is that they need to heavily invest in combat skills. It is fun having a party that isn't full of bruisers, & I like to think that I run a campaign where a character with no combat ability is just as valid as a swordmaster or gunslinger. That is the big concern when a melee sprawls over the session, but then, on the flip side, combat is fun, so it is going to happen occasionally. Or at least chase scenes are; they could have decided to flee, after all.

Luke, who plays the young noble Kuge scribe Haru, was the first to arrive, followed by the rest in one fell swoop; I keep confusing Nicole & Silissa's character names for some reason, but Nicole plays Keku, the girl with the cyborg eye & pet snake, & Silissa portrays Moe, the herbalist savant & country bumpkin. Mollie is Mio, the Sohei trained on a mountain top with a pet wolf, & Eric plays Ren, the street urchin taken in by the Geiko to be trained in the arts of beauty. Last session ended with Haru chasing a glimmer of light into a dark chamber of cells...with skeletons, held together by serpents, the snakes seething on the bones like muscles. The fight with the mockery of men was brutal; Ren took a clobbering from a cobblestone slamming into his shoulder, Mio was hit in the head with a femur & bit on the face by a snake & Haru...Haru got it worst of all. See, the skeletons fold after a stiff hit, the snakes unable to hold the bones together, but then a seething swarm of snakes is still left. Haru is bitten & constricted, & as he hacks it off his body, it clenches it its death throws, the snake's fangs digging into his thigh, nicking an artery. Haru has no medical training, so he...pulls it out! & there is blood everywhere. Mio runs over, & tourniquets the leg. Keku is dragged into a cell by one of the skeletons, which throws the barred door closed behind it. Terrifying! Her snake was whispering clues to her before, but now it shuts up?

Eventually, the skeletons are all smashed, & the remaining snakes slither into the walls, retreating. Is it related to Haru singing "Kagome, kagome?" Who can say! I'm but a humble Dungeon Master. ("Kagome," it is worth noting, is the word for both a pregnant woman; Ren figures that out, & a few others wonder if the naga troubles started after dark, at the witching hour, as the calendar moved into the Year of the Snake.) Moe runs over; her fingers are deft & adroit, even though her kit of alchemical reagents & herbs was smashed up in the fight. She's able to stitch the artery! Haru grits his teeth bravely & hugs Mio's wolf, Tokka. Keku's snake finaly whispers: "...they sssstole from her..." A shame they all rolled so well; I was totally looking forward to his adult character having a prosthetic leg! I would have totally taken it. Patched up, bandaged but not healed, they go over to the flickering light-- it is coming from a massive crack in the floor!

The crack is about four or six inches wide in places, & at the bottom, about sixty feet below, in a globe of light shed by a lamp is...Wakana! Their guide, the Geiko girl assigned to them, who was dragged away by...something. They talk about her, at first, rather than to her, but she heard them & confused (& with bloody hands) she calls out for them. "Mio? Keku?" She was whisked away in the dark, & in in a wet sort of subterranean vault of a similar archeological provenance to the dungeon they are currently in; she got the lamp from one of the wall scones below. "I'm so afraid," she keeps repeating. "I'm so afraid of it." Mio asks "who are you afraid of?" & I've snuck around the game table to lean in close & whisper in Mollie's ear "ME!" just as Wakana's lamp is snuffed & she disappears into the darkness with a shriek.

& so, to the hidden door they'd discovered previously. There is a false wall in the antechamber to the cells, that leads to a secret passage. A panic room, writ large; a series of hidden chambers for the castle's aristocrats to hide in in case a siege goes badly. A place where they could live in secret even while the castle was occupied (an idea inspired by Castle Waiting. There is a round turret of stairs to descend, as there was coming down from the ruined castle up top; the wood & brick construction of the "Haunted Castle" clearly a remodeled addition to the stone floors & walls of the older, lower levels. Here, however, the elements have begun to take their toll. The stairs are half ramp, as fallen dirt & crumbling rock have turned sections into uneven piles of debris. Down they go to another circular antechamber, & they listen. From one direction-- the way that Ren's sense of direction indicates Wakana was-- they hear dripping water; from the other, the faint brush of a breeze. (Mio & Haru have both been poisoned, & I've been having them roll a d10 periodically. If they roll a 1, they get a point of damage, if they roll a 10, it clears from their system; they both roll 10s before rolling a 1.)

The room they choose is the one with water. Down a hallway, walls slick with moisture, into a room which, lit by their torches (cobbled together from bones & burlap) & a lamp, they see...letters, scratched into the walls, covering the place. A brief note on written language: not everyone is literate, but those that are largely use the "Woman's Kana," a phonetic script. This is in the "Imperial Ji," the logographic script that the ruling bureaucracy use. The Kuge caste exist in large part to fill this role, so Haru can follow along. Strangely, the characters seem to be...fluid, evolving, mutated. New, alien radicals infecting the symbols, strange characters imbued with a cold reptillian logic...Keku's robotic eye starts singling out these strange bits & pieces, with a running commentary in the hieroglyphic language of Al-Kem. An infectious language (a la The Invisibles) that is merging with the host language of the Imperial Ji. The two of them are able to piece it together, in parts. "Pistomere" it says here, which is the smells of a crushed ant. "Formic acid" says Moe. (Perhaps inspired by "petrichor"?) Then a name, a Shogunate name, "Kaito." The word "widdershins," & seeing that Haru turns counter-clockwise, to see a "✡" a hexagram shape. "Kagome" means "basket," in particular a certain woven basket, whose slats interlock in a hexagram.

Haru starts singing "Kagome kagome, the bird in the cage, when, oh when will it come out, in the night of dawn, the snake & the monkey slipped, who is it in front of behind!, & the rest start singing with him (except Keku). As they sing, unbeknownst to Haru, they start seeing his belly swell, as through he was pregnant in fast-forward. Judging from the looping coils pressing against his belly, pregnant with a stomach-full of snakes! "Uh, Haru..." say Ren & Moe, but he ignores the, still singing...until the sound of the song is cut off by retching & he vomits up a snake, tail first (to Luke, I whisper, "as the head finally comes out at last, you see that it has a human face.") The serpent, slick with bile & mucus, slithers quickly for a crevice in the wall; Ren darts after it, all quickness, & grasps it, only to have it slither slickly out of his hands. The crack it crawls away into seems to be stuffed full of something, however-- a tsuba, the hilt of a katana or wakizashi, made of twisting snakes, & a netsuke, a sort of pouch fastener that traditionally are created as objects of beauty; this one a spherical mass of entwined serpents.
Collapse