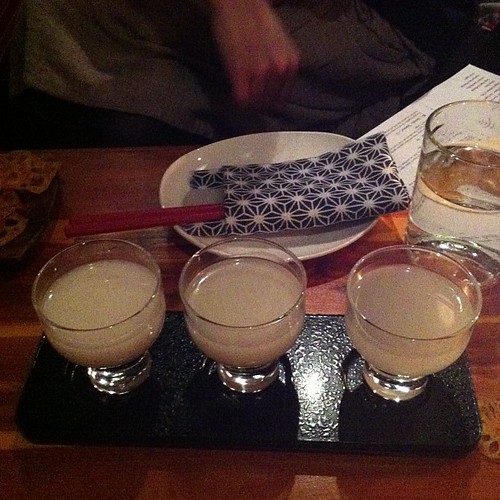 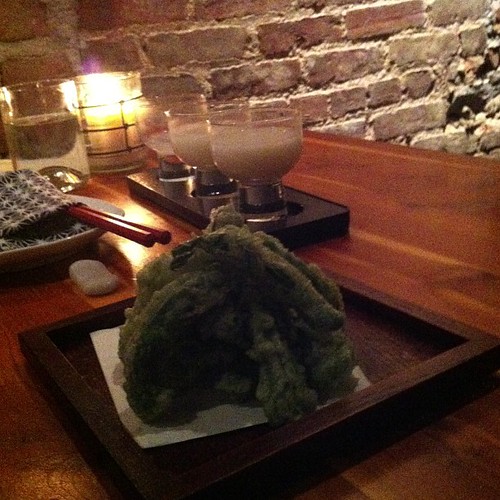 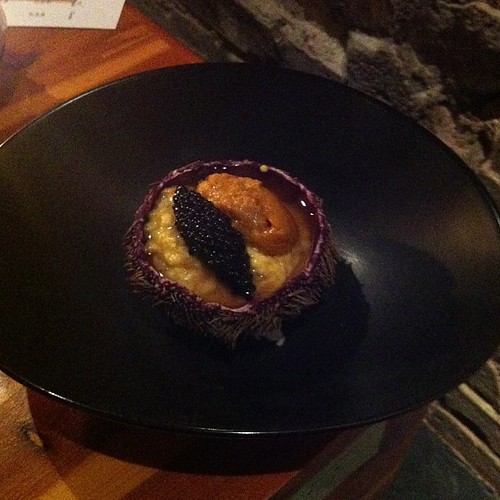 Last night I met up with Jennifer in Chinatown for another date night! Did I mention that Jennifer is a thing I'm trying to make happen? Her co-workers call her Jennifer, & throwing in a "Jenny" can be confusing, so I'm just practicing mix it up so that I am better at code-switching. Our date was at a place called SakaMai on the Lower East Side, & it was pretty freaking nice! First, we got sake flights. I drink a lot of cheap unfiltered sake, so we each got the nigori flight. Dassai 50 Junmai Daiginjo was the lightest & most refined, "Shichi Hon Yari" Junmai Ginjo was next, which is like an extended "middle part" of the brewing process, if I understand correctly, & Kiksui "Perfect Snow" (Doburoku Style) was just raw & granular. All were really good; Jennifer thought the first one was very drinkable, & the last one was so thick it took her forever to drink. Our appetizer, up above, were shishito peppers, which were battered & fried. Then our "small plate" was "egg on egg on egg"-- sturgeon caviar on top of sea urchin roe on top of a custardy scrambled eggs. Fatty & great! At the end, we realized we knew our waitress from Blue Ribbon, & so we talked to her & told her the story of how we got engaged there. Turns out, the ex-chef from Blue Ribbon is the person who opened this spot! Fun coincidences. Then we went over to Kat's & met up with her, Matt & their friend who we annoyed by hijacking the conversation to talk about some phone app we like.

Journey to the Center of the Earth by Jules Verne.

The ancient giant
leaned against his stone-tipped spear.
Nearby, mammoths grazed.

littlewashu's pick for Eleven-Books Club. So this is...well, I didn't like it. I like Twenty Thousand Leagues Under the Sea a lot, which...which I thought would mean I would like this, but instead all that happened was that I got a chance to see Verne use the same fomula over, to less effect. Or well, Journey to the Center of the Earth came first chronologically, so I guess I should phrase it as a less refined version of the same formula. Our protagonist-- Axel "Rose" Lidenbrock-- is a vacant character, little more then a viewpoint with legs, in both cases. The problem comes when you look to the rest of the cast. There is no Captain Nemo analogue, for one; Professor Otto "Slash" Lidenbrock's "mad scientist" act just reads like buffoonery, rather than the dark bipolar attraction of Nemo. Where as Ned Land provides a lot of colour in Twenty Thousand Leagues..., complete with striped sailor shirt & harpoon, his opposite number Hans is defined by being a cipher. What! That is terrible! What Journey... does have though is a rune puzzle! Rune puzzle! All day, every day. & some pretty stunning vignettes-- the ichthyosaur versus plesiosaur fight, the ball lightning-- placed in a couple of vibrant scenes. Unfortunately, the bits that stitch it together are dull, & the characters are banal & absent of any hooks; I thought Hans would be cool, as the eider down collection was a neat idea but then...nope. The weird Earth theories & the technobabble were way less compelling than in Twenty Thousand Leagues Under the Sea too. That comparison is damning. As it the other comparison, of course: to the play that I was in, Cocktails at the Centre of the Earth. 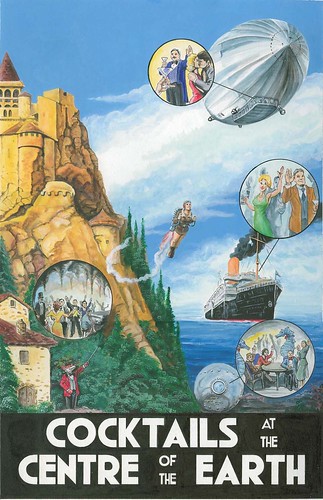