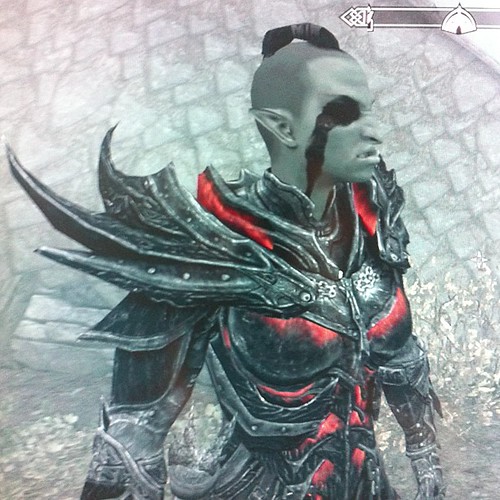 I wrote a post for Tor.com about Skyrim, mostly discussing how the things I value about the games, from a design philosophy stand-point, are the opposite of the things I want in a pen-&-paper role-playing game. It is neat; I guess sort of part of the "medium is the message" discussion, ultimately. Video games! I mean, playing Skyrim has also influenced my new Oubliette campaign, too; mostly through maps, but there is a deeper structural lesson I'm taking from Skyrim too, the idea of factions. Well, I always have factions, those are an old idea, but the sort of dichotomy of choices in Skyrim, the branching tree that starts from "you can join or oppose this, & also even if you beat the bad guy they might still bless you." I am not describing it well; I'm being cagey to not actually talk about my campaign plans, but that is making my signal to noise ratio terrible, so I'm going to stop. Anyhow, I'm level 75 in Skyrim; since you get experience from leveling skills & there are only so many skills to master, the cap is 81. What that means is I've played the hell out of this game. Miraak is dead, Alduin is dead, I'm the Archmage of Winterhold, the Listener of the Dark Brotherhood & the Harbinger of the Companions. I've still got Dawnguard to play through, & you know, endless missions of "go fetch" that I could play, but I'm definitely the apex predator of Skyrim these days. Anyhow, the post is here, if you get curious.

Dial Operator.
"I'd like to save my game, thanks."
Then start the boss fight.

I finished up The Invisibles & wrote about it over at Tor.com. In Supergods Morrison used non-fiction to tell the secrets of his magical initiation; The Invisibles is the same information, in fiction format. Just like All-Star Superman is the story of his enlightened Apollonian man; this the perhaps the Dionysian side of the coin. Anyhow, Volume Seven deals with the departures of several members of the main crew by...well, by jumping ahead a year, crashing in new characters, & not really scratching the surface of them? Whatever, the character I'm most invested in is probably Edith Manning, & she had a proper send off before Grant Morrison's hyperactive & information soaked near-future-- now the near past-- collapses in the ecstatic cataclysm of their enlightenment. Let it snow, let it snow, let it snow. An appropriately meta-text outro caps the coda off, too. My favorite Morrison? Nah, probably not. Important Morrison? Yeah, probably. You have the pan the river for gold, but brothers & sisters, there is gold in them thar hills.
Collapse