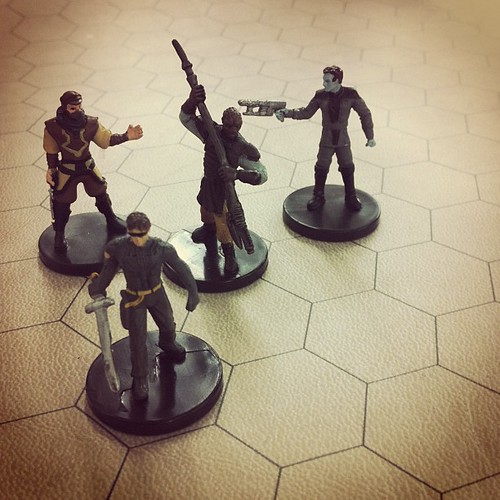 When I noticed that the map being used in Dead World was marked up with Umbrella Corporation trademarks, I sort of flipped. See, I know that Radarless, who was running the game, was using maps pulled from the real world, so why did it have their logo on it? "Oh, those are just outdoor gazebos or pavilions, Mordicai," he said, but I won't be fooled. Maybe he works for them. Actually, funny you should mention it...because my character worked for them, too. See, I really solidified my philosophy about this in the last one-shot. I want my characters to have a "stupid horror movie flaw." You know, it is easy as post-modern gamers to be obstinant. We might own swords, have plans for zombie apocalypses, know how narrative flow works...gamers can be the worst! Instead, I want to go with the flow! I want to use my knowledge of how the tropes & cliches happen in order to tell a better story, not sabotage the story. Last time was the zombie survival game, where we were civilians trying to escape New York, & I played the amateur film-maker who was trying to get footage of everything, so I stayed behind stupidly when we ran to get video, I used my camera in the middle of tense scenes, I audio bugged the bad cops who were taking advantage of the situation even though it put me at risk-- & I still lived in the end!

This time I played Newman, from Jurassic Park or Burke from Aliens. The soldier who has elected to nihilistically & selfishly go for the big payout. We were a special forces group going into a quarantined experimental hospital for the mentally ill; & had a secret, treasonous mission to obtain a sample of LAZARUS 8A5 for my employer. I figure that is a pretty great trope to bust out. James played my soldier buddy; I was the team engineer & demolitions & he was the heavy. Aaron Elvis Presley-- that was me, my parents were Presley-no-relation & named me after Elvis-- & Eddie Aluaia, the 6'6" Samoan dude with a heavy machine gun. Rock & roll, lock & load! We met the other characters-- patients & visitors trapped during the presumed terrorist attack on the facility-- inside of the hospital.

fordmadoxfraud took my backup character idea of being the serial killer who had been brought in to be operated on; he was the "Obama Mask Killer," a psychopath city councilman named Nate Hayes who used the "cash for guns" program to get anonymous guns, which he then used to kill, while, you know, obviously masked. We never found out his backstory but we did know that he was a friggin' cuckoo nutjob. Edbury played...crap, what was his name? Something Grimes. Jesse Grimes! He was a kleptomaniac kid who would come in to visit his "grandma"-- a random old lady-- & steal sick people's medication & jewelry.

The story actually moved with a purpose, because we were military; well, military & some tagalongs we picked up. All in HazMat gear & loaded for bear. We made first contact-- something like a facehugger latched onto Lieutenant Murphy, & then he was dragged off, the "tail" of the facehugger going off into the dark, like Scorpion & his "get over here!" spear. I grabbed the LT & was dragged to the stair well where something clobbered me, hard. Rejoined the group & found out we lost two other men. Yeah, this isn't good. Our objectives were as follows: turn on the power, initiate quarantine protocol lockdown, take the Colonel from the science division to the lab, & get out...& if we saw the previous team that went in & never came out, to consider extraction if possible. & of course me, all I heard was blah blah blah, go to the lab to steal a sample, blah blah blah, get out. Well the generator room is where we hit our second snag; a shambling starved zombie-like thing. I mean, rotting & cancerous, clearly nothing good. I snap off one round, center of mass-- doing something colossal like nine points of damage, when the average human has seven-- to no effect. Eddie, James' character, hoses it down with bullets, doing something more modest, rolling poorly, but still, no effect. We can actually see it regenerating, or something black & tumorous inside of it growing back, at least. It is dragging a fire axe & suddenly it sprints up to me & with an unholy potency, slams the axe down on me! A brutal blow that might have been the end of it for me...except for that I built my character to have a background in Spetnaz knife-fighting. That time embedded with NATO troops in Kosovo from the Baltic states paid off! Quickdraw & Weaponry Dodge give me a nice big Full Defense bonus, so I whip out my knife & redirect, phew! Spent, the thing collapses...only to explode in black maggots everywhere.

Great! We're out from there-- over a claymore trip mine set up by another team-- & moving toward the security room to put the place into lockdown, manually. We actually get there with no problem! Well, some scurrying & creeping, a freakout when my character Elvis sees a room full of dead soldiers. They got Charlie man, Charlie was literally the baddest dude I've ever met! They got Charlie man! Only steels him, ultimately, to check out; to get the sample, get out, get his. No redemptive arc is coming! The serial killer & the klepto pick-up guns; actually, David's character gets "into character" in a creepy way, play-acting a soldier. We shut the alarms down so nothing tries to escape as we put the place on, like, whatever, red alert total airtight lockdown. We've got two hours to escape; Radarless starts a timer in real life to countdown to it. So we get moving. To the lab in one big hurry. Things do go sideways here, terribly so. The "facehugger Scorpion arm" thing? Attaches to a sort of grotesque winged humanoid, like those things from Beastmaster. It turns out they grab you, envelop you in their wings & then...walk away. That is what happens to Lieutenant Mitchell, the second in command. & there are more, a lot more, & these tiny little desiccated munchkins, too! We pop grenades, fragging them, we spray bullets, we take a beating, but we're moving; someone might die but we're in motion! Clawed facehugger hands break the seal on Eddie & Elvis' HazMat suits; not good man, game over man!

Except the winged things...leave? Not a good sign, as the slapping of feet in unison heralds their retreat. All moving in unison, more of those skeletal things, but these have been...modified. The bottom of their face is flayed, & they have been scalped, with the flesh pulled over their eyes & stapled there. Teeth replaced by broken glass, nails, sharp rocks. Some hold steel rebar, some carry girders, others just have railroad spikes nailed through their arms. All shuffling like puppets. Yeah, we...we run too! I yell to the scientist colonel for the codes-- the code my Evil Bosses gave me doesn't work-- & he ignores me. I try to blow the door to the lab, but it is like, unbreakable adamantine or something. Eventually the colonel gets there & punches the number in & seriously, to hell with this guy. I look over his shoulder as he punches in the rest of the codes-- the lab is a sterile bulletproof glass vivisection lab, because of course it is-- because I'm over this colonel & I want that friggin' sample! We find props-- typed up, burned & aged by Radarless for verisimilitude-- of notes. I surreptitiously hide all the ones that say "Project Lazarus" for my own benefit. & then of course, the colonel-- seeing me, maybe, hiding something-- whips out his pistol & shoots at me, before making a run for it. Eddie guns him down; I guess he was planning on sealing us in, but I'd eyeballed the codes, anyhow. There is a big hellpit open in the lab, from the explosion, the bottom blown out-- I tell everyone to get down there, & I'll "bring up the rear." By which I mean, I saw the sample case, & I want to get a vial in secret. Objective retrieved, & on the way down I use some C4 to blow the hole, to collapse it so we can't be followed. Drat, says Radarless, since he planned on having them pour down after us. Ha ha!

Down in the guts of the building, now-- a different ward, where the power generator hasn't switched on. So much the better; we're on a short leash from the clock, but maybe this old quarter hasn't locked down, being without power. Oh & just on cue, the alert that the fuel-air bomb in the belly of the asylum is going to detonate in thirty minutes. No time for playtime! There is a chute of mucus, of zombie rot-shit-slime, but the time for squeamishness is past; down we go! It follows all the way to where there should be an exit, but instead there is just a thick wall of this Giger-esque resinous mucus. There is a nice slope heading down, though. No thanks; I climb along the ledge of the wall, whip out more C4 & blow a hole in the mucus. Boom! I'm out, & Eddie follows, as down David's sociopath; Edbury's guy falls. I'm getting out rope to help him up when he wanders away. He's shellshocked, gobsmacked, & I'm out; we don't have time to chase possible nutjobs down. (Below, the Storyteller tells Edbury, there is a bloated spider thing laying eggs, sucking up corpses, vomiting out maggots-- it is a whole unholy profane necrotic lifecycle down there, I guess. I'm out, Eddie comes & the Obama Mask Killer...turns on us to spray us with bullets! Emptying his clip. Luckily, we're both kitted out in full flak gear; three armor that downgrades lethal damage from firearms to bashing. Our return volley wastes the guy...after he gets in one more futile shot. Eddie sits down, wasted, in shock, thinking we're all infected, but I berate him, get him up & out...

...not before stashing the sample in an alcove. The explosion destroys the facility, but the old hospital, behind the mucus barrier, fares much better. Six months later I return, pick up the sample, & retire a very rich man from the sale of LAZARUS 8A5...
Collapse