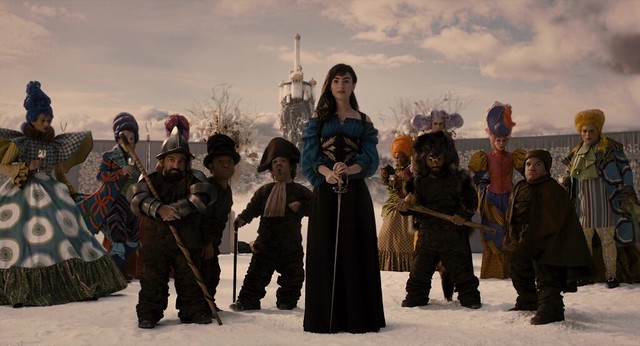 Jenny has been pushing this Movie Week pretty hard, & while Wednesday we watched television instead of a film, between Monday's Skyfall viewing & watching Aliens on Tuesday, it has been pretty successful. Thursday night was Mirror Mirror. You remember when there were all those Snow White movies last year? I sort of wanted to see all of them a little bit, so of course instead I saw none of them. Anyhow, this movie was directed by Tarsem, who directed one of my favorite movies-- we're talking Top Ten-- The Fall. Tarsem, however, also directed The Cell, which was...terrible, but pretty. His follow-up to The Fall was The Immortals, which was...a complete stinker. It had pretty moments, but the imagery was just not enough to override the lackluster script & story. A mess. Anyhow, what that has left me with-- & what Mirror Mirror reinforced-- is the impression that Tarsem is sort of a genius cinematographer, & that his role as director is just sort of so that he has enough gravitas to be given carte blanche to do what he wants. He'll direct something pretty no matter what the script looks like; great, good, bad or awful.

Mirror Mirror belongs in the "good" category. It is flawed-- crowded & badly paced, mostly-- but enjoyable. So first things first: Sean Bean lives through this movie! Okay, I guess that isn't the first thing I should talk about, really, & he lives through plenty! He lived through Silent Hill, although his family died & became ghosts & haunted him, or whatever, I guess. For real though, I guess the first thing to discuss is the cast. Julia Roberts is fine as the Evil Queen. Full stop, the end. I just don't have anything to say about that. Lilly Collins-- Phil Collins' daughter!-- is actually really fantastic. I mean, it will surprise no one that I like dark hair & bangs, right? Kind of reminds me of Krystin Ritter from Don't Trust the B... in Apartment 23. She has a really cherub-like demeanor as Snow White that works, from ingenue shyness to growing a backbone. The other stand outs were the little people in the film, who played the dwarfs. Note I said "dwarfs" & not "dwarves" here-- not magical subterranean creatures, but humans with dwarfism. The dwarfs of the film actually have pretty robust individual roles; I was really into it. The inversion of gender tropes is expected, but appreciated. I guess...B-?
Collapse