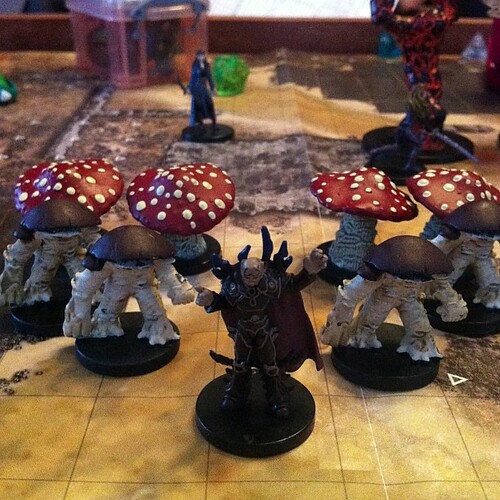 Look at my babies! But I'm getting ahead of myself. So, a gamer weekend! My Oubliette campaign on Thursday & then

fordmadoxfraud's Stories of Our Youth game on Saturday. I had to break away from babysitting Olivia, who is just getting to the point where she asks "why?" about everything, which is going to be my favorite phase, because I'm a knowitall. Oh man, here is why I love my wife in a nutshell: she was like "oh go ask Mordicai about Superman" & then Olivia came over & asked me. I said "Superman is the strongest & the toughest & he can fly & he helps everyone. That is what matters, that he helps everyone." Then I took a shower & went to game! The crew was four members, which is the "right" size I think; me,

skycornerless, Ken & Alicia. The other members of the crew just stepped into a dimension door &...never stepped out! We were about to fight a giant last session & we picked up right there! Well, more or less! First things first; there was a new NPC lurking around near us, Jaer the Tailor! A guy in a crazyquilt outfit with weird thread grenades...that he'd dipped in oozes? Alright! Spoiler alert, he gave his quilted armor to Curulókë, so now I need to find a new illustration...& I think I'm going to use a Tusken Raider mini from now on!

My elf thief Curulókë talked to him while Ken's half-elf cleric/thief Harlowe crept forward with Emily's elf fighter/mage Vigda & the evil cannibal Ashram to try to ply the storm giant (with a crippled & chain giant beside him) with deception. Aeryn overlooked the whole thing from a sniper's nest. Curulókë reads the giant's minds-- first, seeing Darkstrider through the medal, killing the druid Jeru Ashstaff of Hommlet-- & sees no reason not to assassinate them. Things were going great, with Harlowe convincing the giant to open the cave where the gem that contained the whole demi-plane was hidden, & also summoning an air elemental (David had a medium, large & huge set of minis, so it grew turn by turn), then suddenly...strife! Arrows, Harlowe frees the chained giant-- part of a plot by the drow-- & Curulókë runs forward & smashes the vial of green ooze-- stolen at great cost-- on the smokey air crystal! Only to watch it drip down & form a small grove of giant toadstools. Pay heed; this is a turning point! Because those mushrooms are myconids & Curulókë feels responsible for them. He created them! & as there is the "Laughing Wood" for the elves, & the "Bone Orchard" in Barovia & the "Lover's Fjord", Curulókë is going to start the Toadstool Enclave. He is going to try to rescue the mushroom people from the grip of Zuggtomoy, the Demon Queen of Oozes & Fungi.

"Bring me the crystal!" Curulókë shouts, & lo, they do! The crystal that, among other things, allows you to enter & leave the Air Node plane at will. The storm giant is throwing lightning bolts; he hurts Aeryn & Vigda & Harlowe keeps failing his Dexterity checks & falling on the scree & rubble of the wind-swept plane. So...ZAP! Curulókë wishes them back to the Prime Material, bringing Jaer but not Ashram, letting the two giants fight it out. & so! We escape, whole & alive. So close to the roc eggs we are seeking (to repay our avian friends) that we can almost taste it. Actually, Harlowe maybe can taste it, as he uses his magic to divine their location. The thieves are fooled by an illusory basilisk, but Vigda sorts it out, & we find...a creepy wizard with a quasit familiar! Aeryn, in the brown robes of the Earth Node, addresses him & finds that he is in league with the drow. The drow! Who have tempted Aeryn & Harlowe, tainting the whole endeavor. Ah but the wizard is in a vast library, a library that Vigda, with her rather modest spellbook, covets! Hey, you don't have to try too hard to convince Curulókë that anybody in this place needs to be killed. So we do-- after being elves saves Vigda & Curulókë from being charmed-- putting arrows & longswords into him. He teleports away but the elves are on top of him, following him, putting an end to his evil...& revealing buckets of loot. Precious, glorious treasure.
Collapse