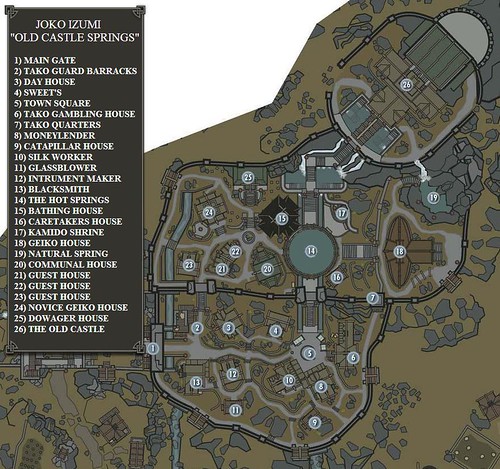 Yesterday we finally got my new Oubliette campaign started! We'd met to talk, you know, about games in theory & practice, then we'd made characters, but this time things got into swing for real! I decided to make the introductory adventure a sort of teenage spring break meet-up; everyone is meeting at Joko Izumi, "Old Castle Springs," the Geiko town. Geiko are...well, the Oubliette pastiche of geisha. I changed the name (to a lesser used synonym) in order to get rid of cultural baggage & to emphasize that this campaign is a fantasy game with Pan-Asian inspiration-- I'm not trying to culturally appropriate thing, & misinterpretation is purposeful, used for the purposes of fiction. The Geiko are the ultimate artistic commune; they are a group that sits along side the civilization of the Shogunate, while pursuing "The Flower & Willow World" of pure art. There are two types of Geiko, in practice; the "Flower Towns" where there is an entire village devoted to the Geiko, & "Hot Springs" where the Geiko are integrated into a community. Joko Izumi is a literal hot springs, in that there is an actual spring, but it is otherwise a flower town, built as part of the ruins of an old castle. If you look at the map, you can see; there is the castle ruins-- uninhabited & rumored to be haunted-- & then the rest of the town is divided into two parts. The lower part is the "town" as most people deal with it; there are Geiko who work as confectioners, glass blowers, silk workers, what have you. Apart from that, however, is the true town-- just climb the stairs, pass another gate & you are in the "resort" area, where the Geiko work their magic. Not just as entertainers, but as hosts & practitioners of beauty as an ethos.

Everyone in Old Castle Springs is technically "anonymous," as one of the things the Geiko do in their role as hosts & courtesans is allow the public "face" of the aristocrats & wealthy corporate zaibatsu members to slip. Of course, that anonymity isn't perfect; if you are paying attention it isn't that hard to pick out who is the rich scion of nobility-- like Luke's character Haru-- & who is the wandering mendicant warrior apprentice, like Mollie's character Mio. Mio also comes with Taka, the pet wolf. Silissa is Moe, the rural village girl whose family herbalism shop just got bought out by a zaibatsu, & Nicole's character Keku is a corporate climber, born into the rat race. She has a pet snake, a cyborg eye & nasty scars along her throat. Eric is playing Ren, the street urchin who the Geiko have adopted & are grooming to be one of their own. Here's my impression of Eric: "Is...is that a map of Whiterun?" Shut up is why, Eric, yes! Only Ren & Keku really have a head for the nuances of Old Castle Springs, at first; both of them are enigmas to the group, but can read the social standing of the others. Haru is the boisterous reflexively snobby big spender that is easy to make as an aristocrat; Mio is guarded but physically fit, always watching the entrances like a fighter would; Moe is smart, absent minded & a bit of a bumpkin. 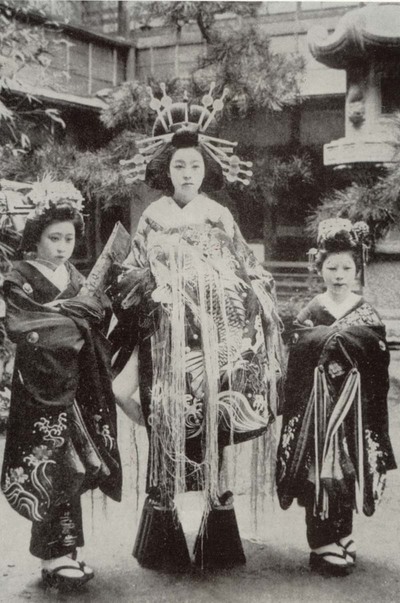 Week night sessions are shorter than I had planned for; we didn't do all that much adventuring last night, but that is fine with me, because we did plenty of role-playing, which is really the fun. First, Ren shadowed the group as Haru decided to use his "Pouch of Mon"-- Kitsune minted coins-- to buy sweets, trying to smooth Keku's ruffled feathers after he asked her point blank about her scars, first thing upon meeting her. Suddenly, a monster! Or well, the confectioner, a Geiko, who was in the back tending her apiary. Geiko are all about being artisanal locavores! Keku eats hers with class, being used to the finer things in life; Moe gobbles hers all up in one big mouthful, astonished, & Haru...well, he leaves a bite on the plate, unfinished. Well, the "plate"-- the taro custard, frozen mochi & fried banana were all served on banana leaves. From there, it is all "bumping into Mio & Ren," as she'd been stalking Ren from the get go! They are met there by Rio, a Geiko courtesan, & two novices; one of thee young Geiko is left with them, a shy but thoughtful girl named Wakana. Wakana takes them up the stairs from the lower city & into the resort proper-- to the hot springs! The center of the town is a huge pool-- actually many linked pools inside one pool, some cooled by ingenious methods-- & there is a "natural" spring that is more unfurnished up on the hill. Most everyone is topless in the hot springs; not entirely sexual, but not entirely unsexual, either. Risque is the word for it. A bit too much for Keku & Moe, who happily go in, but wear linen wraps; Mio is much more trepidatious, but eventually Ren coaxes her in...but she still wears her clothes. Goth teenager alert! In the water they meet Goro, a bit of a braggart & if not quite a bully then a bit over brash.

He wants to play games, & dares them all to meet him in the Haunted Castle at the witching hour!

The comet cried out:
"Fear not!" but in its black hands,
the sword "Extinction."

kingtycoon's meditation on brotherhood, which-- off the bat, let me say this book doesn't pass any kind of Bechdel Test. Heck, it doesn't pass the Bechdel Quiz. Now, okay, this is literally about fraternity among boys, but I don't know-- women are invisible in the story in a way that I think the book's post-modern construction could fix. The book has two stories in parallel, or rather, the same story from two viewpoints, with one appended as footnotes. I think that same schema could be used to tell the story of a woman-- or girl-- as well, showing that the textual invisibility is a matter of the characters' viewpoint, not the authors. I'm thinking of Windheart as proof that Kingtycoon can write a female character with agency; Alstacia is instrumental in making that book my favorite of the lot.

A word of complaint here: the font size in the print edition of this book is...ridiculous! It is a big, fat tome, like half a Song of Ice & Fire sized doorstop brick. This isn't because it is actually that daunting in length, but because it rivals-- nay, shames!-- large print editions. You may think this is a petty complaint-- I'm sure Kingtycoon does-- but it really hampered readability. Besides which, Gleameyes is a book that utilizes footnotes, different fonts & inline images in the telling of its tale, which I think makes print size fair game. You know, thinking of other books that have used the abuse of footnotes to good effect, I can't help but think of House of Leaves; Johnny Truant's interjections & asides might be a little dismal, but they aren't intrusive.

In praise of Gleameyes, let me say this: the story section in the middle is just great. You know the type, like Worlds' End, the Sandman arc where a bunch of people tell their tales. Here, the tale is that of the boys, &...others. The boys, well, the go into Baba Yaga's hut &...well, then they all wake up on other planets. John Carter'd, again! The planets have a really great ring to them, with names like "Black Calamity," as well as a neat mysticism to them. Something I share in my setting of Oubliette-- planets not just as balls of rock in space, but as something spirtually different. Each of the boys goes to a different world & comes back changed accordingly. Magical demi-god warrior, manipulator of probabilities, perceiver of harmonies...that sort of thing. The other stories, however, dig into Klial's mysteries. A lamia, one of the Pradaharadrim-- the ur-men of Klial, a great invention-- & my favorite, an angel-comet-spaceship.
Collapse