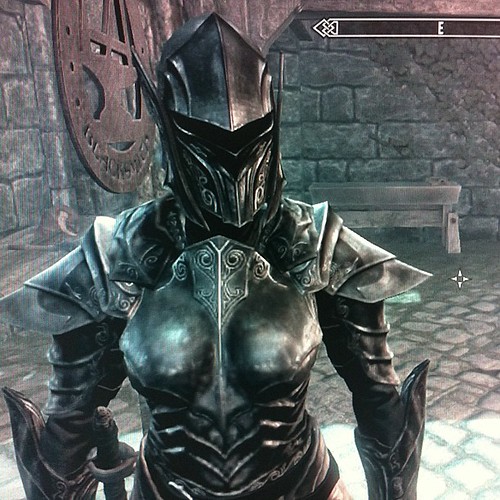 I continue to just buzzsaw through Skyrim. I was thinking about what I must be like, in the story; I have enchanted black Ebony Armor & a mace that steal souls when I kill with it; I wander around taking souls in order to make better armor...I'm totally like a Dungeons & Dragons rumor. Anyhow, those days are over; or at least, I'm now less enigmatic & more intimidating. I combed the land, going from alchemist to black market contact, collecting all the demon hearts I could, & I forged a set of Daedric Armor. I think I've been playing the game...interestingly. You gain Experience from increasing Skills, so while I have been Smithing & Enchanting (& Speaking while selling stuff,) I've been getting levels, without adventuring...so most actual missions aren't that hard for me, right now. I wade through with my armor-- the heaviest in the game, with the perks that make it twice (no, better than twice, like 250%) as good-- & might high health, using Restoration magic & my mace like a tank. I'm the Juggernaut! I can't be stopped. & I just took the "Alluring" perk, so I'm super attractive, now. I joined the Mage's College-- getting to Hogwarts was a pain in the butt-- & I was falsely imprisoned; when I fought my way out I was given quasi-"barbarian" Armor of the Old Gods. 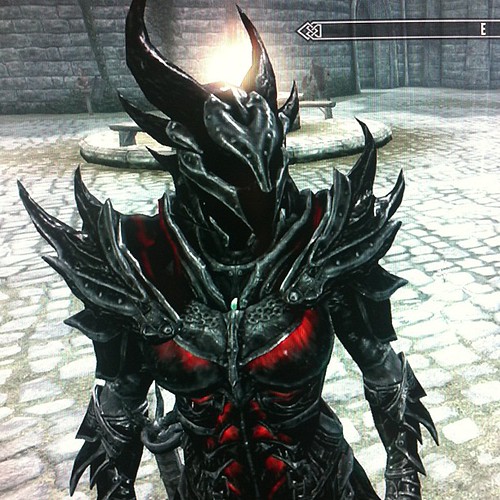 Lately I've been doing Imperial quests-- I'm a Prefect in the Auxiliary Legion-- & Companion quests. I have a lot of side quests to mop up, along with a bunch of demonic quests that I think I'll ignore. I decided that Mauga is a grim sort, but not a wicked sort. I'm not down with all the Daedra who want me to do evil missions to join them; I figure I can save that for my next play-through. Since I started a new Oubliette campaign, I've been thinking about what lessons I can learn from Skyrim. First things first: the beauty of decline. I decided that the Shogunate is, like Skyrim, past the age of expansion. That means there are lots of ruins dotting the land; as many as there are settlements. An easy trick, but after seeing how pretty & fun it made Skyrim, one I'm happy to adopt. The other is sort of just a simple binary on quests; that is, to look at every quest as though it could (eventually) go either way. Become a lycanthrope & kill the werewolf hunters, or become a Silver Hand & wipe out the shifters. Or if not binary, then trinary-- join, ignore, oppose, with each path branching out to mean something, & with some choices canceling out others down the road. I think that happens naturally in running a game, but it also provides a good sort of over-arching flowchart for things.
Collapse