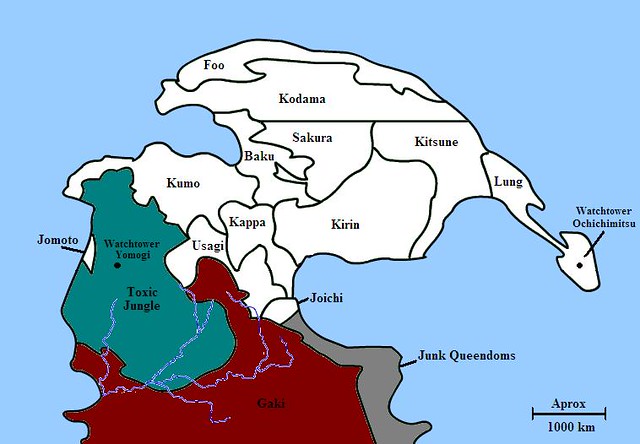 So the wheels of the new Oubliette campaign are turning in earnest, now! We got together a few weeks ago to talk about what sort of game we would play, & my Pan-Asian influenced campaign was agreed upon. So be it! Let the tale of Blood & Sake begin! Yeah, I decided to call it "Blood & Sake" because I'm cheesy as heck. A giant cornball. Anyhow, last night was character creation! Luke created Haru O-Kitsune, trickster member of the Kuge bureaucratic nobility. Nicole made Keku Kin, a Bucho boss of the filthy right & freaky weird Kin Zaibatsu. Mollie made Mio Yudai, a Sohei warrior monk from Kumo who is a Yojimbo for Haru O-Kitsune. Eric made Ren, a street urchin adopted by the Geiko courtesans & trained as a Taikomochi jester, the court wit. Silissa is playing Moe Hayashi, who is one of the Bucho bosses of the Cho Zaibatsu. That means we've got one aristocrat of the courtier persuasion, his former monk bodyguard, an entertainer from the Geiko, which fits neatly with that set, & then two corporate representatives. That is an interesting mix! Anyhow, the twist that I sprung on them after they generated their characters was that they were actually going to start by playing their characters as 12-14 year olds. It is an idea I am cribbing from

kingtycoon; the "we met on summer vacation" establishing adventure. It is a good way to get people from all walks of life in one location & with the stricture of class & aristocracy out of the way. The players are pre-teens, sent to a Geiko resort town to relax & recover. Ren, the Taikomochi, is still a street urchin, just recently adopted by the Geiko, just begining his training. Moe's grandmother's herbalist shop just was bought out by the Cho Zaibatsu, & she's here with that money. Mio has just left the monastary of the Sohei in Kumo. Keiku is here after a horrible experience of having drank poison. Haru...well, Haru has money, so he doesn't even need a reason, but he's struggling with stress inappropriate in a boy his age. So, with that all set up, the table is ready for an actual adventure!

This Book Is Full of Spiders by David Wong.

Spiders for faces!
It's what I've always wanted.
Oh & knives for hands!

You know, when I finished reading John Dies at the End, the first of these books, I didn't really know what to say about it, & I'm in the same pickle again, here. I liked it! This one is the "zombie outbreak" story, with the Lovecraftian & Whedonian twists you'd expect to it. There are anecdotes that really make it-- the miner's kid at the beginning during the establishing sequence about the history of the town of Undisclosed-- but that isn't really "it." There is Amy! Oh dear sweet Amy, I was just getting fed up with the "boy's story" when the novel veered off it's course of failing the Bechdel Test & was saved by having a female protagonist in the mix. The fact that she talks about Aslan & the Ents is just gravy. Ultimately though, this is a horror story about the sort of stuff I like talking about. Dunbar's Number factors in a major way, for instance, which is totally on my radar with stuff like the Prisoner's Dilemma. Oh, & I was really impressed with what happens when the Army rolls in-- short story, the Army can murder zombies like woah, because the Army is a modern mechanized fighting force. That bugged me a lot about Cloverfield, actually; if the monster in that movie is just a big crazy animal...well, then being shot with missiles would kill it. Seriously, without some kind of magical shenanigans or technobabble, shooting a thing with missiles will kill it. They are made for blowing stuff up! Flesh is softer than rocks & metal, is what I'm saying. Anyhow, these books! Are charming & are great page turners. Ali recommended This Book is Full of Spiders to me as "better than the first one," & I think that is true. I gave the first one to

fatbutts & she devoured it. We are supposed to watch the John Dies... movie together soon.
Collapse