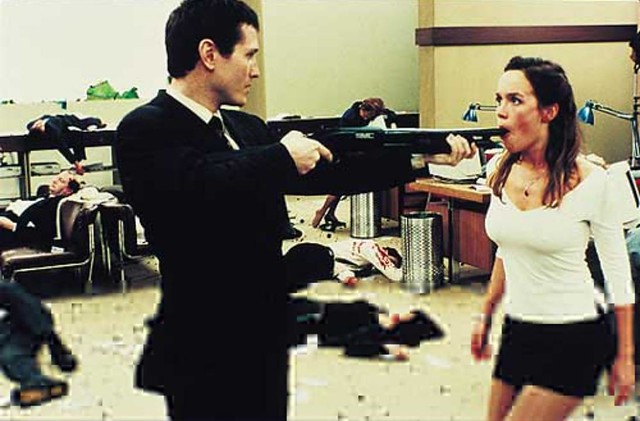 Remember how I was talking about the appeal of the ethical calculus of The Culture? Well that was sort of my problem with Christie Malry's Own Double-Entry, I think. I can't help but read the book at lampooning ethics in favor of-- what, morals? Then again, this is a contentious subject! The book was

fordmadoxfraud's pick for Eleven Books Club, & we all had wildly different interpretations. That is something weird; normally we all agree on the parts going into a novel, just differ in opinion on whether it was good or bad. During the discussion of This Dark Endeavor someone said: "This is just a boy's adventure novel," & those of us who liked it were like "Yeah! It was awesome!" Let me do role call, really quick, before I forget: me & Jennifer, obviously, then David, as I mentioned,

littlewashu, Jenny E., Beatrice & Terra piped in from China via the internet. Sherene was supposed to come, but had to bail, which is why we hung out on Monday. Or you know, is the impetus, not the cause, of why we hung out. We hung out because we're buddies. Anyhow! Very controversial meeting! David & Carmen were sort of the leaders of the faction opposed to me; I didn't really like the book, though I didn't mind reading it. I just found it ultimately empty of any substance, & not in a sitcom way, either. In a way where I think it put on profounds clothing to fool readers with a disguise. I won't say pretentious-- I don't think the novel was that-- but it read like a NaNoWriMo, all forward momentum with a sudden cop-out. Carmen even thinks that the end is divine intervention, which I think is heresy . It is the random stupidity of the universe, it is the opposite of heavenly judgement; it is deus ex machina, but the author is the deus. & not the literal deus! Anyhow, we wobbled back & forth from there, & then we tried to watch the movie version! Which is what the still above is from. It was...terrible. Did you ever see that movie for Irvine Welsh's The Acid House? Maybe I have fond memories of it because I saw it at the right moment of college, but it was that style, but none of the charms. Frankly, it was too much the interpretation I had of the book. I didn't dislike it, I just thought it rang hollow; this was that hollowness, dressed up in the sleazy clothes of that turn of the century "British Grime" tradition. It was shelved because of 9-11, which was probably the right call, since it was done in an obsolete hyper-violent style. Yeah, I get it, the world is dark, get on with it.
Collapse