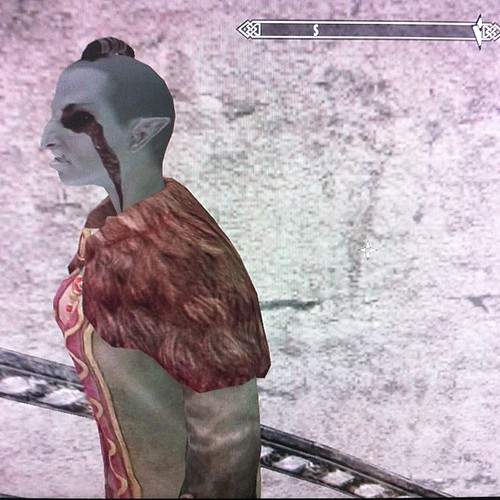 Last week was tricky because-- well, here is the thing. I scoff at "busy" people, as a rule. Yeah, I get it, you have a job & social obligations. Everyone does. You're "being busy" doesn't impress me; it just seems like you aren't good at prioritizing your time. I get it, though-- sometimes in the same situation I just tell people I'm not going to hang out with them, & I give the honest reason. Like "I'm going to the gym & I won't let you tempt me" or "nah, I am going to hang out with Jenny, I like her more than you" or whatever. So with that caveat, last week at work was busy, working through lunches & staying late. That is really only one of the excuses I have to being so absent from the internet, though, & it isn't really the major one. My lunch break isn't the lynchpin of my online life. The real problem-- as you've guessed, or if you know me, as you already know-- is Skyrim. Yeah, I'm addicted, sucked down into the quasi-Viking blackhole of that game. Yesterday-- on my day off!-- Sherene came over & we went to the gym together...& then she watched me play Skyrim. In my defense, she wanted to! I just took advantage of that. I have done other things with my time, like AD&D & book club, but I haven't wanted to put any thought into a real post.

So I've continued to get better at Smithing & Enchanting; I have a full suit of Orcish armor-- with greaves, boots, helmet, the whole shebang-- that I made myself, & then enchanted. Nobody in the game is wearing armor that advanced, really; I'm outclassing my peers by a wide margin. I also have all the Heavy Armor perks I can get; my heavy armor doesn't count toward my encumbrance, which is huge, & I get a lot of percentile advantages for it being a matched set & such. Oh, & the other piece of news: I'm a werewolf. I joined a Warrior Guild, the Companions, & it turns out to be a pretty great Carlo Ginzburg-ian pagan ecstatic cult! I swore the oath, but more to the point I drank the blood & became a lycanthrope. It is under my control-- I'm not mindless or anything-- & the side perk is the real advantage. See, while I can't get the "Well Rested" bonus from sleeping, I'm permanently immune to disease. In specific, I don't have to worry about getting vampirism. Plus, Mauga, I think the wolf totem suits her. Or like, Ankylosaur, with my mace & my armor bonus. When I told Brian & Jocelyn that I became a werewolf, they said, "oh, weird, we hunt werewolves," & I was like "with the Silver Hands? Yeah, I hunt them!" so right, the various paths of the game are crazy deep & overlapping.

A bunch of Demon Princes are trying to get me to run favors for them, but not the demon prince I want! Some of the demons are more evil than others; I ran a mission for the like, one who just hates undead, for instance. The Prince of Madness had a weird quest; like, I was trapped inside the mind of a dead, mad emperor-- think like, someone from the Middle Ages being trapped in Nero's ghost's brain-- & had to go do weird Jungian quests to help his like, confidence & paranoia. There was one where a woman wanted me to be a ghoul, & was all sultry; I went on her quest planning on clicking "You're mad! I'll stop you! Let's fight!" on the dialogue tree but instead I accidentally whacked her in a fight against monsters & she turned on me. So I killed her. All's well that ends well. There is an evil door trapping a primal evil, that is a whole thing, & then there is the guy who wants me to get demon stuff for his temple...come on guys! I just want to find the patron of the orcs! Oh well. My Imperial quests are going well, & I've been promoted to being a Prefect. & I finally own a house, in White Run! Which, thanks for reminding me, I need to start buying all the Ebony ingots I can find & stashing them at my place. I'm still poor all the time; I need to get better at Speech & Smithing so that buying raw materials & making magical armor & weapons is a net gain instead of a net loss; I'm working against the classic "buy for half price" logic of RPG games.

Rapture of the nerds,
The Great Singularity,
Uplift: The Sublime.

So it is no surprise that I like these Culture novels. I mean, I like them a lot! They are sort of Star Trek, done better-- hey, meddling utopian civilizations are cool!-- with two strong twists. One, a Douglas Adam's-esque sense of humor in the godlike artificial intelligences, the Minds; two, a fundamentally nihilistic sense about the universe. Really, is it any surprise these appeal to me? Yeah, looking at the universe it is impossible not to be a nihilist! Sure, but then, all that means is that you are really strongly incentivized to commit to a consistent code of ethics! I mean, if there is no meaning, then all meaning is arbitrary, so decide on arbitrary meaning that makes it better for you. Having done that, contributing your excess effort to spreading that ideology makes sense. So yeah, Bank's post-scarcity world with its blend of petty, brutal cruelties & casual super technology suits my taste. Anyhow, The Hydrogen Sonata is not the best of them. It is another Excession all over again. A bunch of Minds getting together to flail around at a problem & eventually reset back to the status quo when the problem wraps itself up. That is alright; Surface Detail kicked a lot of butt & had me laughing out loud on the train, so I'm not worried that he's lost his touch or anything. Besides, the Pizza Adage works here; even a mediocre Culture novel is still pretty great. I read through it in a big hurry, which in the end shows I must have liked it plenty. There was a few turns of phrase, like calling giant space whales who soak up solar power "Deadly Slow" on account of their long metabolic cycles, that I really liked. Banks is good at colouring in a few splashes of detail everywhere the story goes, to sort of say "the narrative won't be here for long, but these space aliens have their own thing going on, too" & I appreciate that skill, as a worldbuilder. 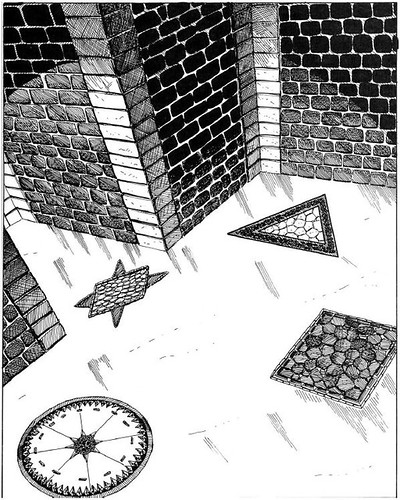 More trouble in the Temple of Elemental Evil! Which is to say, more danger & adventure in

fordmadoxfraud's Stories of Our Youth AD&D campaign. If you recall, last session was just my elf thief Curulókë, Alicia's human thief Aeryn, & Ken's half-elf half-cleric half-thief, Harlowe, deep in the dungeons of the Temple. Curulókë & Aeryn had all their armor, weapons & gear melted by an ooze, Harlowe had gotten poisoned badly & all three of them had their eardrums blown out by a shrieking mushroom. So, we've got the Temple of Elemental Evil right where we want it, lulled into a false sense of security. This time we were rejoined by Emma's halfling psion Dilly &

fatbutts' half-elf druid, Pickle. The first chunk of the episode was Dilly & Pickle retracing our steps to get down into the guts of the cave-- involing mindreading, psychadelic freakouts, blood pouring out of ears, that kind of thing-- but eventually they found us. After dealing with the Crone. Or you know, not dealing with; she's a whole thing. What can you do? If my gnome wild mage Encre was still alive, he'd be the perfect one to act as interlocutor, but alas, felled by goblin arrows. Anyhow, once we met up, well; Harlowe wanted to close some gates, Aeryn & Curulókë found a giant ampitheater full of colour-coded walls, we poked around & fiddled, in a room with weird sigils. Actually, Curulókë & Aeryn Prow ended up there by themselves...& when they touched a symbol & disappeared! Wisked away to be "rescued" by Tusken Raiders, or Fremen, or something, in a vast hurricane of dust & sand. My bet is a para- or quasi-elemental plane, but I can never remember which is which. I just remember that dust mephits were all goth in Third Edition. Could just be the Plane of Air. At least we didn't end up burning to death on the Plane of Fire or something.
Collapse