The Good Doctor Fell,
with his alchemy table,
haunted by plague ghosts.

I liked the first one of these but then promptly forgot about following up on the second one. I guess there is a lesson in book publishing, marketing & selling there, huh? There was a big push to get attention for the first one, but then...crickets. Or maybe there as attention called to it, & I just missed it; either way, it wasn't until I saw it on

carmyarmyofme's shelf that I was like "oh yeah! Right! Can I borrow this?" Putting all that aside, I like these books quite a lot, actually. The best way I can think to describe it is: "what do all the weird NPCs of the game get up to when the Player Characters aren't around?" You know, the weird doctor you buy your alchemical supplies from, what does he get up to? He can't stand in his shop all day. The taciturn smith, what is his deal? Maybe that is just the Skyrim obsession talking. The centerpiece, is the eponymous castle, which like any good setting is as much of a character as anyone else; maybe even more so. Secret passages galore! Another glorious perk of the story is that is just doesn't have the swaggering machismo you might have come to expect from fantasy. I have heard the book posited as being "feminine," as in, focusing on the parts of a fairy tale neglected in favor of the more "masculine" adventure, starring the mothers, ladies in waiting & washing women, & while I think that is very clumsily put-- by me, mostly-- there is a pearl of truth there. 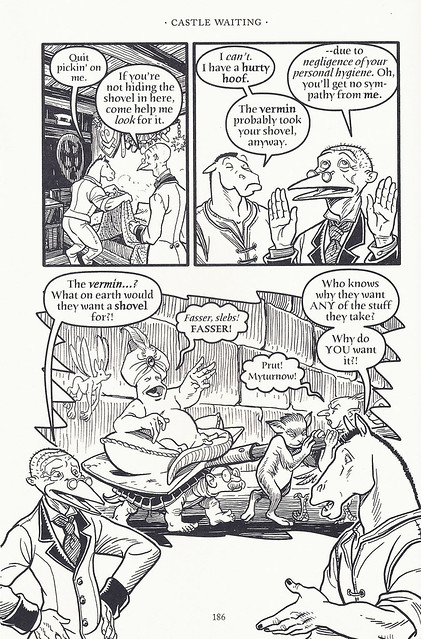