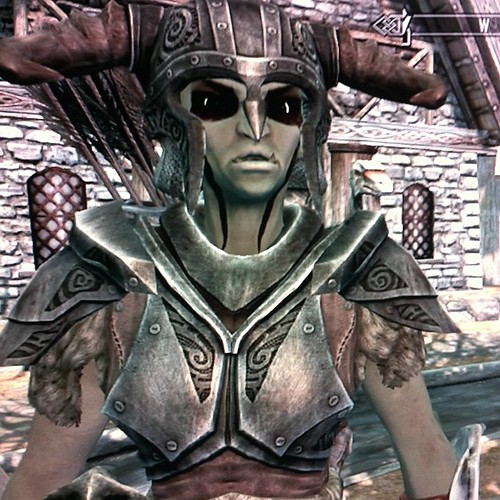 I've sort of fallen off the map lately on account of how I have been busy at work-- instead of having a chance to write up a post during lunch, I've had to work through my lunches-- & because I started Skyrim. I've never much cared for the Elder Scrolls games, but this one "gets" it. I don't know if it is just that processing power has caught up, or if this one's recipe is just better balanced, but yeah, I'm fairly addicted. I still think it is too micro-manage-y, but then, the paradox of that is that the micro-managing is fun. I made an orc female, named Mauga, & I definitely fell down the rabbit hole designing her face. I wanted a balance between ugly, interesting, pretty, & intimidating, & I think I got it. She has a witch's nose & a shaved head with a top-knot. The way Skyrim works is that you don't have a class, as such, but whatever you use, you get better at. Various pen-&-paper games have tried this out, & I never like it-- it takes you out of the world-- but with a computer to crunch the numbers in the background, it works out. Despite not having a "class" per se, I am still of the "Warrior" archetype. A tank, more specifically. I wear heavy armor; actually, that might be my highest skill. I sometimes fight two-handed, with a massive warhammer, but my usual combat style is one-handed, with a mace in my right hand & a "heal" spell in my left. I guess I'm sort of a cleric, though I hold no devotion to a deity (yet).

When I say Skyrim is a little too nuts-&-bols & detail obsessed, but that is also its charm, what I mean is stuff like alchemy & smithing & enchanting. I'm pretty good at smithing-- I've focused on it & orcs are good at it anyhow-- so let me use that as an example. Step one, find a mine & go into it & dig out ore with your pick-axe. Step two, go to a town with a smelter & melt the ore into an ingot. Step three, kill an animal & skin it. Step four, find a tanner's rack & scrape the hide into leather. Step five, cut some of the leather into strips. Step six, go to the forge & combine ingots of various types with leather & leather strips to make armor & weapons. Step seven, take the armor to a workbench, or the weapons to a grinding stone, to improve them. Then, you can enchant them! Step one, find a magic item. Step two, take it to an enchanter's table, & disenchant the item, destroying it but learning the magical ability in the process. Step three, find a soul stone. Step four, back at an enchanter's table, combine an item, an enchantment, & a soul stone to make your magic item of choice. That whole thing there? That is my jam! I am going to make my armor & weapons, improve & enchant them, throughout the game. Like an Earthdawn Weaponsmith.

The other great thing about the game is that it is a true open sandbox. The things you do echo through the world, & you can choose to do almost anything. This means that if you find someone else playing Skyrim-- like Jocelyn & Brian-- you can talk to them about what their character did or is doing, & it will be totally different, but also a little "there but for the grace of Malacath go I," as you can see the turning off point that they took, but you didn't. Last night, for instance, I signed up with the Imperial Legion Auxiliary, while Brian & Jocelyn are neutral...& Brian's son is a member of the Stormcloak Rebellion. Terra's husband Scott is a sneak & an archer, while Theresa focuses on destructive magic. Anyhow, I just made it to Solitude, & now I need to sort of explore the world of Skyrim a little bit. I don't know what else I am going to dedicate my character to. Oodles of side quests, I bet. The Empire, a little, but if they ask me to do stuff I find unethical I might tell them to shove it. I might find the orc's favorite demon prince, Malcath, & get into that cult, but I might not; I might just see if any weird religion suits me, & get into that. Or not, even. The whole world is my oyster! Pretty soon I have to go kill this Falmer leader-- think Drow, but way worse-- who is too tough for me right now. I've cleared his dungeon except for him & his dwarven robot bodyguard. Then the Companions, who are a warrior guild I joined, will give me another quest!
Collapse