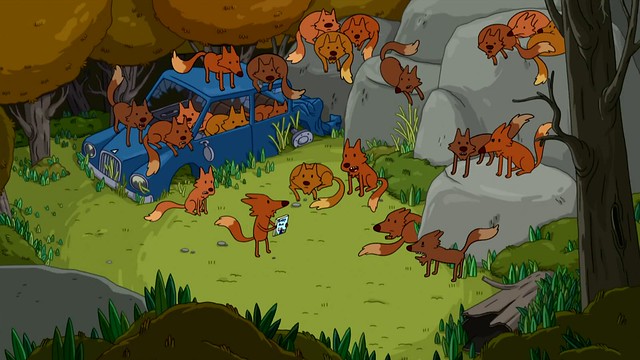 So the newest Adventure Time episode, "Jake the Dad," was pretty great-- as Terra & I predicted, half rainicorn, half magical dog is a nigh omnipotent mix of power & adorability-- but I was kind of sad that the episode hit the reset button at the end. I realize that messing with the formula was probably a bit much to ask, but I'm sad the kids are already off stage. Sure they can return, & I bet they will, but I wanted Jake the Dad to be a continuing storyline. Anyhow, I watched that in the slice of time between getting home from work & ducking out to go to the gym. Did I mention I have a new gym buddy? I met Tiffany at a work party & we were like "oh we both go to the same YMCA, let's go together." We ended up not partnering up last night, but we have a couple of times. Let me see her; last weekend was mostly a mix of bad movies that Jenny & I had wanted to see but had heard were bad. Abraham Lincoln, Vampire Hunter was no good, but I don't blame anyone in it. It just...never came together, & you know, talking about the Civil War & slavery is hard to do without putting on rose coloured glasses & white washing it. Same criticism stands for Assassin's Creed; I get that you don't really want to tackle atrocity in your action movie or video game, but the problem is, that atrocity (along with genocide, let's not forget!) defines American history in a way that riots in Boston really don't. Anyhow, One for the Money was actually...not unwatchable? If it was a TNT show, I would give it another chance. Which is the problem; as a movie, it is really unlikely another one will be made, but if it had been television? With another few episodes it could have found its footing. Besides that, we watched Olivia, had dinner with Kira & Nino, & I played AD&D. On Monday Jenny & I hung out at Kat's apartment with Jocelyn, Brian & Matt, before ducking out of there to go to eat Filipino food at Maharlika. I'd never had Filipino food-- or it is Philippine food?-- it seemed like a base of something like Thai, with an unsurprising Spanish influence, & it had a sort of...American G.I. influenced twist? At least, that is how I can't help but interprete the deep fried Spam fries. After that we went to the Tor.com release party for the last Robert Jordan book, but it was late & hot & crowded & we didn't stay very long.
Collapse