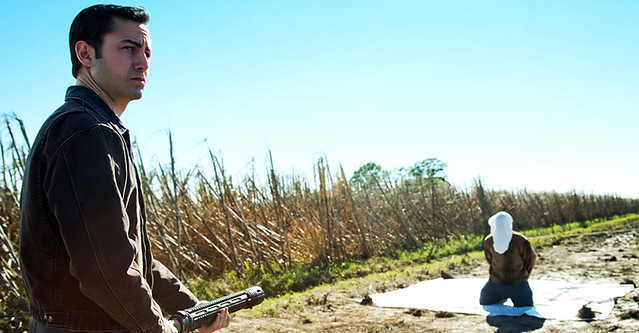 So, my experiment in liking Ke$ha failed the instant I saw her live on one of the New Year's Eve celebration shows. She really just has no charm or charisma at all. Anyhow, the good thing about the end of December was that Jenny came home! She didn't get home till nine o' clock on the thirty-first, though, so I knew we weren't really going to to do anything for New Year's Eve, but that is fine with me. Really the only thing you can do is go to a party & get drunk, right? I can do that whenever, so no great loss. I'm not sentimental about calendar changes, really. The solstices & equinoxes are cooler, anyhow. Instead, Jenny & I watched Looper. Which was...fine! I wanted to watch it, but I was worried it would be "clever." That is "sarcasm" by the way; there is a disease in modern cinema, put there by M. Night Shyamalan but spread into an epidemic by Christopher Nolan. Seriously, Nolan, why can't people see through his "twists" the way they finally got fed up with Shyamalan's? I mean, listen, The Sixth Sense worked, that was a fine movie. I really liked The Village on the basis of the cinematography, but I will admit it was poisoned by the "twist." After that, what was the last movie he did that was any good? The Lady in the Water, which didn't have a twist! With Christopher Nolan, it is the same thing. Inception was fine but it wasn't anything to go googly-eyed over. I actually really liked The Prestige, but then, the twist there was built in by the original work, right? Maybe Nolan is fine at adapting things-- though he fails at Batman, utterly-- but when he has free reign-- as again, his Batman trilogy-- he's rubbish. Willing to sacrifice verisimilitude, characters, plot, narrative & logic in order to deliver a meaningless twist. Anyhow, all this is to say that Looper doesn't do that, & thank heavens.

After Looper we just sort of hung out on the couch flipping between the various Times Square channels. The verdict: NY1 is the best New Year's Eve coverage. We'd learned it last year, too, but forgot it. Then before too long, bed. It wasn't the best night-- Jenny was sad & went in the other room to be sad, & then I was troubled that she didn't feel safe being sad around me-- but we got over it. I'm maybe still a little heartbruised but it will heal. When I woke up in the morning I popped over to the grocery store, picked up some supplies, & made breakfast for the two of us. That was nice; New Year's Day was laid back in the morning. I had time to fool around & play Assassin's Creed III some; I think it is growing on me. Mostly because the main character Ratonhnhaké:ton has started (correctly) calling out the Founding Fathers. "Hey Sam Adams, awesome to hear you complain about having to pay taxes on tea. Super unjust! Hey, unrelatedly, don't you own a slave?" Also, I've stopped following the main plot & started running around killing people for mini-missions, & that is enjoyable, too. Anyhow, I fiddled around with that, went to the gym, & then came home in time for us to take out the air conditioners--finally-- & meet up with

ranai to head over to

carmyarmyofme & Tony's for New Year's Day. This is the second time we've done it with them, the whole Southern tradition of black-eyed peas & collard greens for luck & for cash in the new year, respectively. Also, to drink Tony's homebrew beer, named & made in honor of his new daughter. We'd sort of seen their baby on camera at book club but this was the first time of being around her in person. It was nice! After that, the wife & I came home & just hung out together. Then, back to work!
Collapse