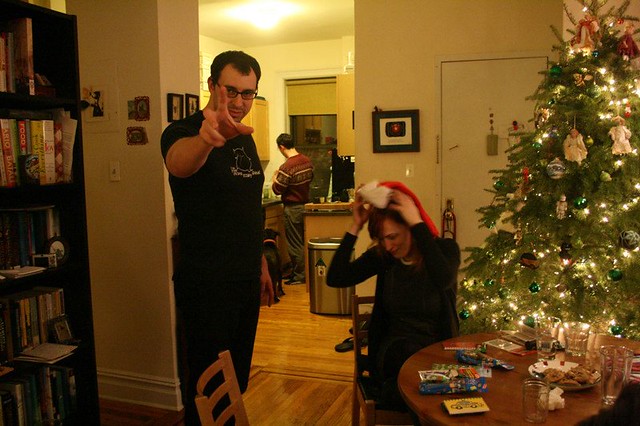 I've been spending the new baktun kind of schizophrenically. & sort of banally, but that was out of my control. We had Xmas (where that photo of me &

fatbutts), but then things were called off pretty early, since Jenny was sick, so for the next two days I just hung around with her while she played Epic Mickey 2 & then in the cracks between her marathon sessions, I played Portal 2, which was crazy great. Then on Friday, just as she was feeling better, Jenny had to leave to go to Alabama to visit her grandma. I, of course, then got sick. It was a bummer-- I was planning on using Jenny's trip to go to the gym a lot to make up for holiday malaise & to in general be social-- but so it goes. Since I'd beaten Portal 2 on single player, I did manage to play some cooperative levels with Ghaash & Chris. There are some tools for communicating wordlessly, but I think a headset would be far more efficient, so I ordered one. I wasn't "sick," I was sick, so all I could do was play video games. Kira came over at one point to use Spare Oom as an office & that was the sum total of my face-to-face interaction. I also played a bunch of Assassin's Creed III which I...don't really like. I think I'll probably beat it, & it has some fun parts-- I actually really like the naval combat-- but no, I don't think it will get a good review when all is said & done.

On the first night I was sick-- & wife-less!-- I watched Justice League: Doom. First, don't get your hopes up too far; it is not in fact a cross-over between DC & Marvel where the Justice League fights Doctor Doom. How great would that be, though? No, it is an adaptation of Mark Waid's JLA: Tower of Babel, where the Justice League is defeated by someone who has hacked Batman's contingency plans for how to beat his teammates. Honestly, I thought it was a good pitch for a comic, & it remains a good pitch for a movie, though it does suffer from the usual "why don't any of the villains finish the job" logic that people make about master plans. Still, it has an all-star voice cast including Kevin Conroy (the best Batman of all) as Batman, Tim Daly as Superman, Nathan Fillion as Green Lantern, Carl Lumbly as Martian Manhunter, Michael Rosenbaum as the Flash, Claudia Black as Cheetah, Alexis Denisof as Mirror Master, & Grey DeLisle as Lois Lane. & was written by Dwayne McDuffie. Can's shake a stick at that. Then the next night, when I was starting to feel better & was looking to kill a half an hour before bed, I accidentally got sucked into re-watching Wet Hot American Summer which really just is an amazing movie. I totally forgot Amy Poehler was in that! Anyhow, good natured comedy is so much better than the embarrassment-themed comedy that competes for the same slot.

Finally, though, I was better! Seriously, I rolled out the air mattress on the first day & spent some of my time moaning on it. Just a weird flu bug, but I get pitiful when I'm sick. It isn't flattering. Sunday I felt better, though, & so I finally went to the gym again. I know, I only missed two sessions, but dammit, I feel gross when I do, especially since I've been in the middle of holiday binge eating. In the end, I only put in an hour, deciding it was best to not over-exert myself after being sick, but I felt much better after ward, & when I go this afternoon I'll feel like I'm back on track. Last year I was actually completely on point with a three days a week average; this year I think I missed by four days. After the gym, though, I went to go see The Hobbit: An Unexpected Journey in 3D & high frame rate with Kat. We had tried & failed before, but this time, success! The verdict? It was great. First off, as I've said before: I have no problem with 3D, I just won't see conversions. Avatar was pretty, but rubbish as a film. Tron: Legacy was fun, & the 3D was part of the text of the movie, the same way that CGI was in the first Tron. Here, in The Hobbit, it was just a cinematography tool, & it wasn't intrusive or in-your-face at all. Well, maybe there was a moment with a moth, or the goblins, where it was more about "spectacle," but over-all it was subtly done. The high frame rate...well, it took me zero minutes to adjust to it. I don't get this period of adjustment! Maybe it is because I already have seen high definition television? Someone-- Matt maybe?-- noted that the special effects seemed more "special effect-y" but I think that is the arms race of movies & television. As the special effects get better, the display quality can improve, which means the special effects have to get even better, ad infinitum.

After we finished The Hobbit: An Unexpected Journey, Kat & I jumped onto an express train & went up to Matt's apartment to meet up with everyone for...football? Well, that was the loose reason, at least. "Everyone" being Jocelyn, Brian, Chris, Jon & Justin. Matt's apartment is big, but its size in long-wise, in railroad style, so we were a crowd in every room. I've said before: football is my favorite sport. That isn't saying much, I still don't care about it, but I find it easy to create a narrative for it. Those gentlemen want to go that way, those other fine fellows want to stop them. They can run or throw. Sometimes the other team catches the ball! Got it. Besides, things actually happen in football; in baseball, nothing happens, & in basketball, too many things happen. Both have a bad signal to noise ratio. Football has all their weird & inscrutable time-outs & penalties, but it is the best of the lot. Anyhow, for me the real highlight of the evening-- besides of course, the company-- was Matt's chili. You know, I'd never had fritos in chili before? Now I see what all the fuss is about. That was pretty darn tasty. I ended up leaving before the game was over, which was still later than I'd planned on. I was first out the door, as usual, but I was following other people's lead! Both Chris & Kat had acted like they were about to leave, but this group of friends has a powerful inertia. I'm able to break away, but Brian has remarked before that they've trying to latch on to my escape velocity & failed many times. You just leave! The train ride home was untroubled, but dang was it cold yesterday. Then home, then to bed, all on my lonesome.

A Hero for WondLa by Tony DiTerlizzi.

The black goo plus GECK
equals the monolith, or
a Celestial.

My review of DiTerlizzi's WondLa books is up at Tor.com, so you can read the actual thing there. I liked the first one, but I liked this one better, even though it didn't make it into my Honorable Mentions this year. The metatextual game didn't work, this time it was even worse than in the first book! I don't have a lot to say that I didn't already, so I'll just include the following pictures that didn't make it into that review, both of which are something I might actually use in an Oubliette game someday. & great, now I'm going to be thinking about Planescape all day... 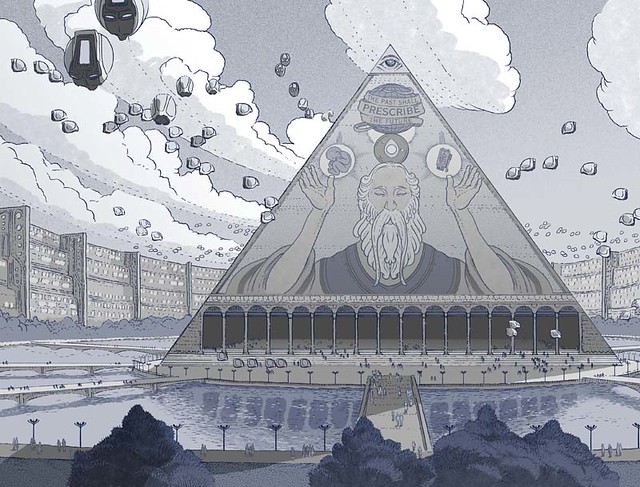 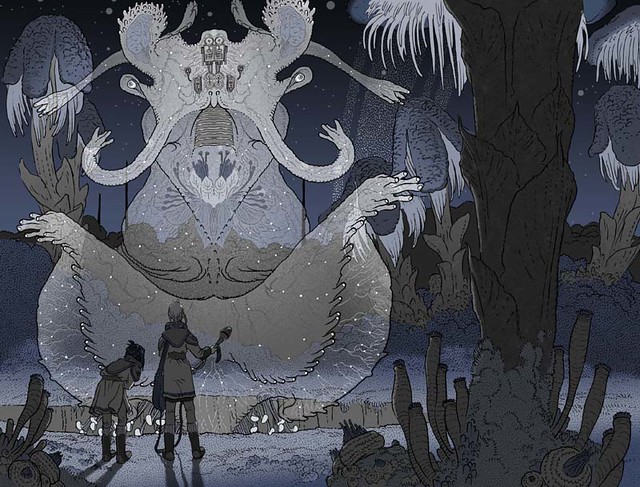