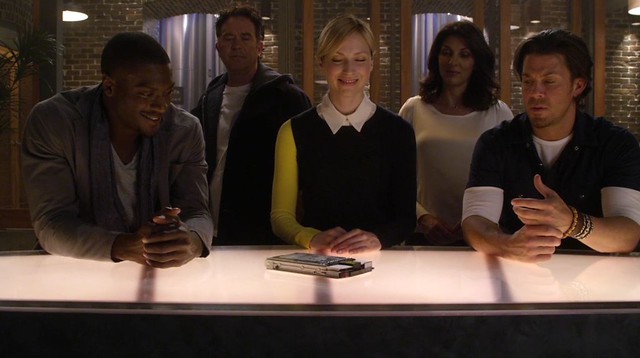 You know, the showrunner for Leverage, John Rogers, is the guy who said: "There are two novels that can change a bookish fourteen-year old's life: The Lord of the Rings and Atlas Shrugged. One is a childish fantasy that often engenders a lifelong obsession with its unbelievable heroes, leading to an emotionally stunted, socially crippled adulthood, unable to deal with the real world. The other, of course, involves orcs." I'm glad that I got into his show, so that I had something to put that into context with. The fact that he was in the TableTop "Fiasco" episode is just gravy. I mean, by then I knew he was a big old Dungeons & Dragons nerd. You can see it in the show-- all of the characters have their class description: Hitter, Hacker, Grifter, Thief, Mastermind. It was Jenny who got into it first, but watching it over her shoulder really dragged me into it. I'm sad to see it go! I've been a fan of Timothy Hutten ever since he played opposite a young Natalie Portman in Beautiful Girls-- seriously, if you haven't seen that, see it-- & Christian Kane I knew from Angel, obviously. Actually, Dave Gross just "dream cast" Kane as Radovan Virholt & that is really sticking with me. Aldis Hodge was in that football show everyone likes, but he was new to me; hey, I'm not in that good of shape, but thanks for having a huge nerd with big muscles, huh? Gina Bellman I've seen in Jekyll, but for me the real winner of the show is Beth Riesgraf, who played Parker, & who I have a teensy-tiny crush on. My point is-- I'll be watching to see where everyone lands. Rogers might not have Joss Whedon fame or klout, but I hope he is able to keep a similar bullpen of actors. Oh you know-- on the show itself-- I should mention that I think Season Four was the real climax. The action was intense, rising, climactic-- every episode was a pleasure. This Fifth Season has seemed like a passing of the torch, so I don't find the end surprising-- if anything, I find it fitting. I'm happy with it coming to a close, & found it satisfying along the way. & it was always Parker. 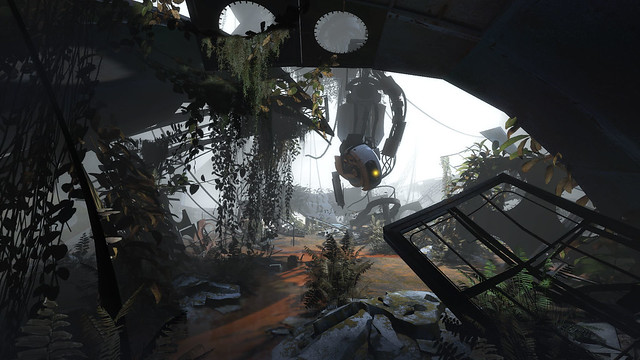 So, I beat Portal 2. By way of putting that into some kind of context: I got Portal 2 in my Christmas loot. It wouldn't've taken me this long to beat, even, if Jenny hadn't been sick yesterday. My point isn't that it is short-- it is a physics engine, not a roleplaying game-- but rather that it inspired rabid obsession, immediately. My first awareness of the Portal franchise came from the basic awareness of the mechanics. Gun, shoots two portable holes. Clever! The second thing I learned was: the cake is a lie. What finally put me over the edge was the song from the credits. Choice! Actually, what made me give Adventure Time another chance was Marceline singing, so maybe that is a weakness of mine? Anyhow, Portal 2 is super great. Like, you can easily see why it is a classic & why everyone adores GLaDOS, et al. A lot of puzzle games annoy me, but Portal 2 didn't. You know that Playstation game IQ that some people loved? I hated it. I realize that Portal 2 is basically the same game but...shut up, is why. Another thing-- while Portal 2 seems like it is a jumper, it...isn't really a platformer? I called it a physics engine & that is what it is, a weird, speculative physics simulator. Sure, the story won't take you by surprise, but the puzzles will. They are just like, well--pun intended-- itches in your brain. They are all really tricky, & when you figure them out you feel like a genius. Some-- I bet it varies from brain to brain-- you breeze through, while others you just stare at until it clicks. "Oh yeah, reverse the polarity, then switch it back & dump jump goo on the sentry drones!" Ugh, I was stuck on that one forever. So anyway; that game is just bloody fantastic, & if anyone has a PS3 & wants to play the cooperative missions, I'm so there it isn't even funny.
Collapse