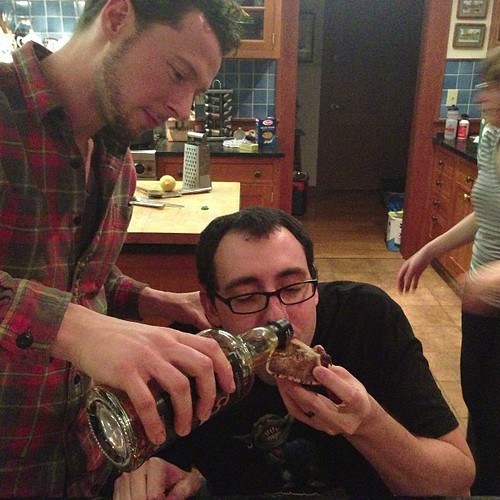 So, I'm in a cabin in the woods, alone in the dark! Well, "cabin" is being modest, I'm at the retreat in the woods, the redoubt of Kira's aunt & uncle's family. I've been here before-- Jenny & I were trying to figure out. I was here in 2010 when we went to Storm King & Blue Hill; I was here in 2011 but otherwise my records aren't clear. Jenny & I are here with Kira & Nino & Olivia & Kira's cousin (& our friend) Joe. Oops, Olivia is awake, so it looks like today is getting started, so I'll be brief. I was going to talk about this last week, too; maybe I will, now, maybe I won't. See, I just got up to hug Jenny goodmorning & tease her because we gave Olivia a Lego set-- a Duplo set-- & Olivia said she made it & Jenny was like "well, you helped, but I mostly..." & I was all "...let her have this, Jenny." It was a good tease! Okay, focusing on today: Jenny & I came up here on the bus, & I was behind the guy who levered his seat two degrees. I'm pretty tall; if you tilt your chair, there is no room for my knees. Just my luck; of every seat on the bus, he was the only one who slid back. We got up here, had a drink in a college town bar, & then got picked up & came into the cabin. Dinner was short ribs & pasta...well, but really the bone marrow we had first was the star of the show. I introduced Olivia to Doctor Who; which is a theme, since I got Kat into it this week, too. Then, since we had scotch-- Springbank 10-- we decided to do bone luges. Bone luges! The yupster answer to icing. You pour a shot down a hollow bone & the alcohol dissolves the marrow into your mouth. It was pretty successful! Afterward we played some Balderdash, but really only a round's worth, before our attention drifted. Up here, with no lights & plenty of scotch, bedtime comes early! 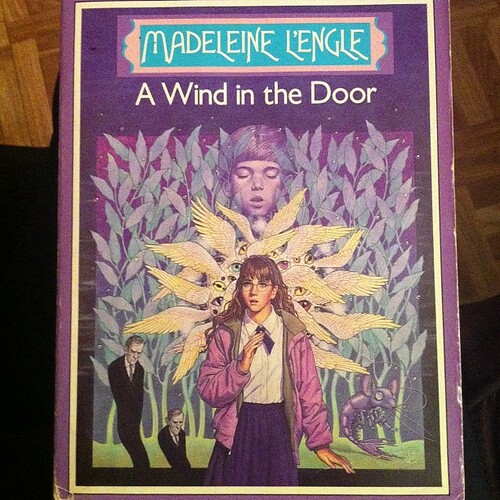 So I talked about the cabin, which is where I'm still at, but I'll start a catch-up post on the week, too. Bare in mind-- bear in mind? Yeah, I think "bear" in mind-- that Olivia is running around a bit like a maniac so I will be periodically interrupted. Oh alright, we've set her up with an iPad & some Sesame Street so she seems fairly content. So Sunday & Monday was a holiday dinner & a holiday party at work. Sort of kept that regulated; same attitude rolled over to another work party on Tuesday. I indulged a little, but before too long it was time for Matt & me to grab Brian to walk down to Kat's. Oh! That was actually another successful use of the internet to bridge intercontinental gulfs, like last book club! I used Facetime on my phone to pipe Terra into the party for a while. Real time video conference to the other side of the planet, via a little Mother Box sized device I carry with me-- we live in the Age of Wizards. The other notable thing about Tuesday is that it was my last day in the office till January! I am in the middle of a nice fat vacation. Wednesday was lazy; I went to the gym & wrote a couple of Tor.com articles, but that is about it. I'm still buried a few book reviews deep, actually; I thought I'd get more writing done than I have! Wednesday was Television night, but we didn't really watch TV; Ahmed came over for his last night in the United States, meeting up with me, Jenny,

fatbutts & James. We watched Pitch Perfect, which is basically just Bring It On meets Glee, & was pretty great. & Lilly made cocktails!

On Thursday Allison came over for a quick hello! I sure am interesting! Come over to my apartment & watch Adventure Time, that is my idea of a good time! Still, it is nice seeing Allison; I joked about how we would be better friends when she moved than we were when she lived here...& yep! Pretty true. After that, I went to the gym with Tiffanie, who I'd met at an office party, found out lived on my block & had a YMCA membership, & decided to be gym buddies with. Whew! This week sounds pretty busy, in retrospect, though it felt pretty laid back. Not a lot of Jenny, though; Tuesday & Thursday she had a work thing, & Friday she was in the office all night. My first plan on Wednesday was to go see The Hobbit: An Unexpected Journey in 3D with the high frame rate with Kat first thing in the morning, but she couldn't make it, so we just delayed the plans till Thursday morning. We met up first thing, got breakfast sandwiches, trudged to the movie theater...& found that yesterday was the last day of the early morning show. Drat! Instead we ended up back at my apartment & I got Kat addicted to Doctor Who. Like I said, I sure know how to show a lady a good time! The secret to Doctor Who, by the way, is to start with "The Eleventh Hour." I know there are many out there who disagree with me, but if you want my advice, the Eleventh Doctor is the way to go. Kat & me hanging out was interrupted by the cleaning lady; we seemed suspicious, but just because the cleaning lady was early. She surprised us; we're not sketchy! The rest of Friday night was...well, I didn't know Jenny would be at work so late, so I sort of waited for her. Which I don't mean to sound passive aggressive, it is just what happened. There was a party I could have gone to, but I'd already declined-- I thought we were leaving for upstate Friday morning, not Saturday morning, at the time-- so I just stayed declined rather than figure it out. & now, here!
Collapse