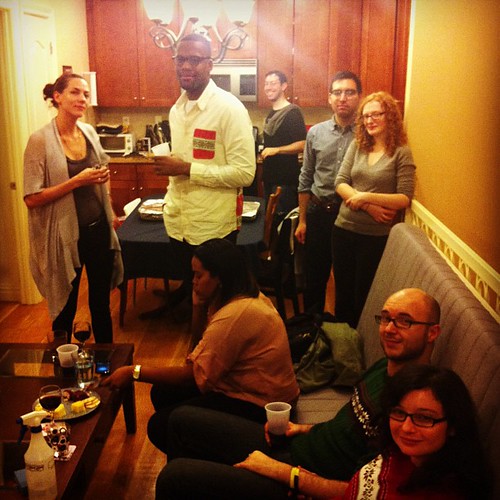 So Saturday was book club, & that was swell. Sunday, Jenny & I went to go see The Hobbit: An Unexpected Journey, & then we went over to James &

fordmadoxfraud could make us some hearty holiday fare. It was the AD&D crew, plus significant others, so that means Alicia & Ken & Rasheem & Jessica. Here is what was on the plate: shepherd's pie, Guinness & mac & cheese, lamb, whipped sweet potatoes & asparagus. We also played Cards Against Humanity, which I dominated! Good thing, too, because last time I played I didn't win a single hand. After the party, I still wanted to hang out, which is weird...normally at a party I have to fight the urge to Irish Exit, let alone want to still be social with anyone other than Jenny when I leave. Still, here we are! We went to the bar where we game-- appropriate-- & Nigel stood us up a round, which ensured a certain level of toastiness. There was a very drunk Irish fellow who was one of the drunk guys who think they are very charming, but could obviously turn mean in a minute. Which, I guess, describes like, every drunk in The Wasteland, so I know the type. Mischief, managed! Then yesterday-- that is Monday-- Margaret & I went out for oysters & had ourselves a gab at L & W Oyster Co.. After work was my department's holiday party but...I just couldn't stand the idea of more drinks, & I wanted to go to the gym, so I sort of hid in a corner with Matt, Kara, Melissa & Gina. Someone tried to get past us & I started asking them Bilbo & Gollum's riddles. I guess that is weird? 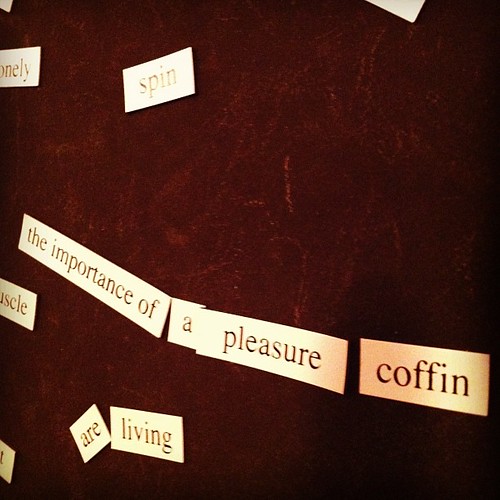