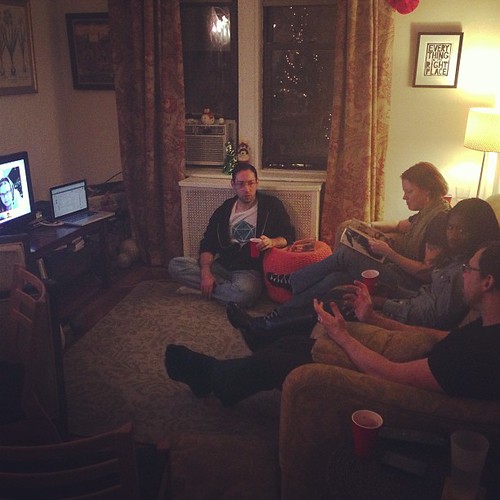 Last night was the meeting of the Eleven-Books Club for my second pick, Grant Morrison's The Invisibles. I don't think it went over as well as my first pick, Kraken did, & frankly I can't say I blame the detractors all that much. Technically, my pick was just the first volume, "Say You Want a Revolution", & I think that is pretty flawed. Dane is the worst, the magical homeless guy trope is tired, & the book is what

fordmadoxfraud called "kitchen sink." Morrison is throwing stuff at the wall to see what sticks. David still liked it, if in no small part for Vertigo nostalgia & from a position of knowing who Grant Morrison became, but we both said it was "adolescent." That is, in terms of authorial development. Really, I stand by my thesis that modern Grant Morrison's DNA is half Invisibles & half JLA. Jenny, who took the picture above, hated it. Really disliked it, in fact; she was a grump all day because she felt pressured to finish it. She only just got past Dane & Tom to the bits with Shelley & Byron. Carmen didn't even get that far, so she hated it too. Which...I get that. The bits without the actual Invisibles in it don't actually work. I think Terra saw some promise in it. David, Beatrice &

littlewashu all read up through the second volume, "Apocalipstick", so they had much better opinions of it. I even lent Beatrice "Entropy in the U.K.", the third volume, on her way out. I was the obnoxious one saying "I know, but all that Dane stuff pays off in the third volume!" about...well, everything. The third volume was the best one is all I'm saying. Also notable about last night, besides all the hard cider we drank, was that it was a super digital meeting. Carmen just had a baby & Terra lives in Shanghai, so we piped them in via Google Hangouts. Carmen & Terra's view would switch to whoever was talking, but ours was stuck on whoever we selected-- I want to try to figure out if there is a way to split screen it or something? I think the problem was that I clicked on a thumbnail & I didn't know how to unclick. Anyhow, it was laggy at some points-- oh man, is there a one second delay in my free video stream to the other side of the planet?-- but overall a success. Also digital? How Carmen & Kerry read the comics.

The Hobbit by J.R.R. Tolkien.

Ancalagon sleeps
on a pile of bones & swords.
His treasure is Death.

I can't help but compare Gandalf to The Doctor sometimes. The start of this books, for instance; he's much more Odin-the-Jerk than Gandalf-the-Grey. Like the Doctor, he needs to hang out with hobbits to mellow out. Anyhow, I wanted to re-read this before I saw the movie, & there! I did. After reading Song of the Vikings I couldn't un-see all the Norse mythology underpinning the book; even more so than the Lord of the Rings I think. I mean, there is a were-bear! I also couldn't help but see things from a bit of a Dungeons & Dragons perspective. I mean, right off the bat: size Small, non-magical, very quiet. Then later, when Bilbo is left in the goblin warrens: they have a good sense of direction, recuperate from falls & bruises easily, & have a great store of wisdom. Would -4 Strength, +2 Constitution, +2 Dexterity & +2 Wisdom, along with size Small be too over-powered? I suppose so, but I'm just reading what we've got in the text, after all! Reading it with the awareness that it had become a trilogy, I couldn't help but pick out where I would divide it up. After the eagles rescue them from the wargs, I think, for the first film; I'd let Gandalf do his first goodbye, here, so he could be in the beginning of the second movie escorting them to Beorn's. Then I think I'd end the second one with the dwarves in barrels, bobbing out of the hall of the elvenking. I should mention here that while I do think it is a little silly to make The Hobbit a trilogy, it really is more like The Quest of Erebor, as Stephen Colbert explained to Peter Jackson. It is actually "The Hobbit & the Appendices of the Lord of the Rings" as a trilogy. A few closing notes, here, before I go look for tickets to buy to see the movie today: it has always, ever since I was a wee Mordicai, tickled me that Gandalf pulls the same trick on Beorn as he pulled on Bilbo; Tolkien doesn't make it explicit, but the way the dwarves show up at Bag-End is the same way they they crash Beorn's mead-hall. In Mirkwood, when Bilbo climbs to the tree tops, he sees all those black butterflies & they are explicitly called "black emperors." Am I crazy to think that Godspeed You! Black Emperor took inspiration from here? I hope so, I really do. Lastly, my favorite piece of flattery that Bilbo lands on Smaug is "Chiefest & Greatest of Calamities." Stay classy, master burglar! 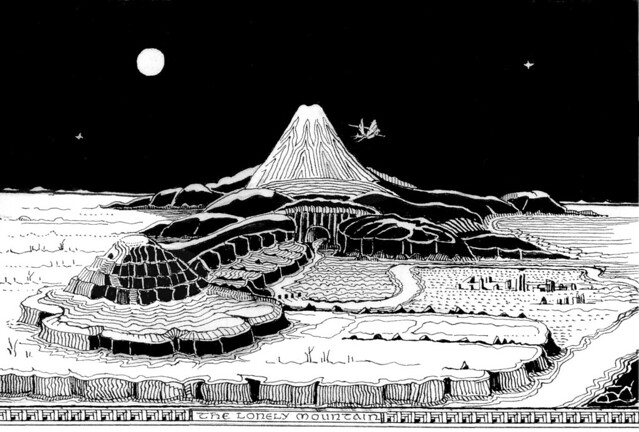 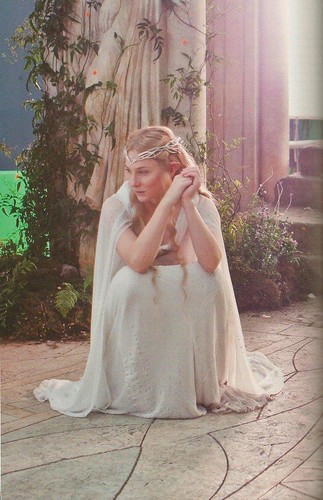 Well, after finishing reading The Hobbit this morning-- I'd read it last year, too-- I went ahead & bought the ultra-deluxe 3D 48 frames-per-second The Hobbit: An Unexpected Journey tickets. Jackson's directing is rooted in spectacle & special effects-- I mean that in the nicest way, & as a call back to his splatterpunk days-- so I was all for it. It is 3D conversions I hate, anyhow, not some ideological rift. Jenny-- who has apparently been living in a hole in the ground, & not a comfortable hobbit hole, or at least not in a fantasy flick inundated subculture-- didn't know it was 3D, even. Well, "luckily" for her, there was trouble with the projector at the theater & we had to leave the Ultra Real Premium Megatheater or whatever it was called to tromp down to boring old 2D. I don't have anything to say about the technical achievement of the film, thus, or at least I won't until I cash in these vouchers & go see it again. Which I will. So, on the movie; first, I don't drink the hateraide, except perhaps for the Nolan Batfilms, so listening to critics fail to have joy in their hearts only made me ready to give this movie a chance & even cut it some slack. Second, Jackson doesn't define Middle-earth for me; my imagination has thoroughly populated the lands for me long before New Zealand & Peter Jackson came onstage. Third, of the films, I only think The Fellowship of the Ring is really perfect; I have plenty of problems with The Two Towers-- though the orchestral performance I saw with

onatopofthings was fabulous-- & Return of the King.

I went in to the film expecting to see something on the level of Return of the King, & that is what I got. Now, as I mentioned, I've long since made my peace with the fact that this is really The Quest for Erebor & not The Hobbit. I think that is the wrong decision, but I can see why it was made. In fact, my biggest problem was that Peter Jackson directed it. If this had been directed by de Toro, as planned, it would have had the necessary distance from the first trilogy; it would have "read" differently. Still, I'd reconciled to that, as well; if anything, the fact that it was Jackson made the fact that it included the material from the appendices better. So, I liked it as much as I thought I would-- a lot-- & I had problems with the parts I expected too-- notably, forced drama. I don't care about Azog the Pale Orc; I wish that guy had stayed on Game of Thrones to play Gregor "The Mountain" Clegane. I just felt like the "prod" to the plot wasn't needed. The pacing would be fine...if you hadn't added in all this material...to speed up the pacing! Still, I didn't mind, either. I don't need all these fight scenes, just get on with it! The biggest issue was that the tone of the film-- serious, like the Lord of the Rings-- is at odds with the source material, & with...well, various drafts of the script. I didn't find Radagast to be a Jar Jar Binks, but I did find him to be more "faerie tale" than the "epic tale" Jackson was telling. Similarly, the dwarves can't decide if they are brooding, like Thorin, or comical, like Ori.

Doesn't matter. Enough of it works. Balin, for instance, as the grizzled old veteran, is really the heart of the dwarves. Martin Freeman is lovely as Bilbo, especially once he starts getting Tookish; his scene with Gollum is one of the centerpieces of the movie, & he totally pulls it off with Serkis, though Jenny found it boring. The word is "majestic," Jennifer! "Riddles in the Dark" is wonderful, but not as wonderful as the scenes with the White Council. Ian McKellen is loving chewing on the scenery as Gandalf the Grey, Christopher Lee is believable as the prick who knows what he's doing, Elrond isn't the jerk that he was in the first scenery, & Cate Blanchett luminously floats around like...like flowers on the surface of a pond. No, really-- I saw Blanchett & Hugo Weaving in Uncle Vanya so you can tell there is real camaraderie there-- but the council scene is great. Gandalf is impish, but deservedly chided by Saruman-- seriously, you are worried about the dragon so your plan is to poke him with a stick?-- Elrond isn't wracked with emotional problems, & Galadriel...glows like starlight caught in a maze of mirrors till its light is focused into the form of a bright female figure. The Queen of the Elves is clearly calling the shots. Sorry, I will stop talking about Galadriel before I just turn this whole thing into an entry about her. Here it is, at the end: if you go to this movie realizing that you are seeing Peter Jackson's The Hobbit, I think you'll enjoy it. It certainly is pretty enough, & so as a visual appendice alone, I would have enjoyed it. The actors are having a blast, & nailing it, though the character direction is schizophrenic & the pacing is screwy. It isn't a perfect movie, but I'm going to go back & see it again this week, so that shows you I liked it, at least.
Collapse